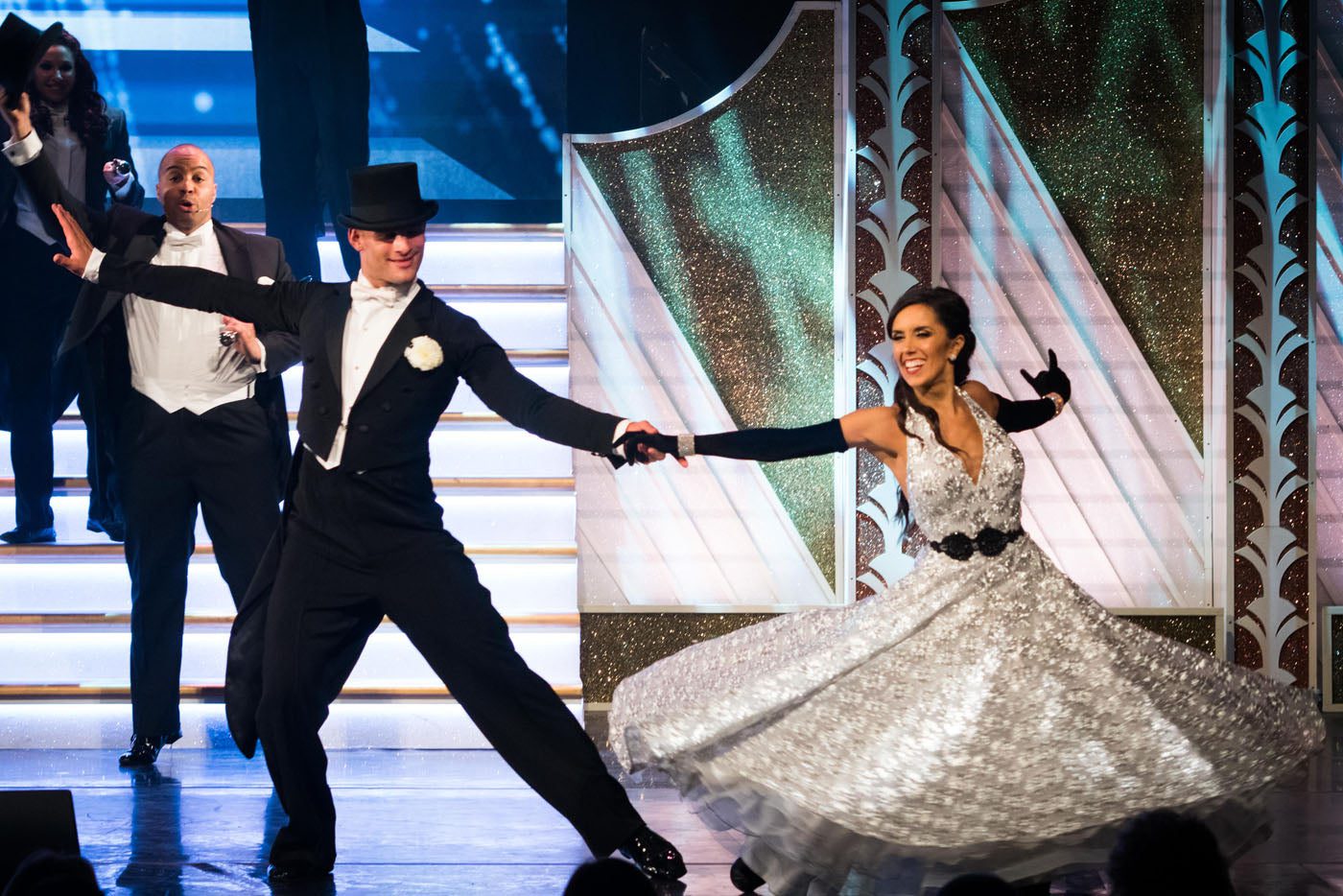 Katharine Hepburn once quipped of Fred Astaire and Ginger Rogers: “Fred gave Ginger class, and Ginger gave Fred sex.” Ballroom champs and married couple Janette Manrara and Aljaž Skorjanec share a more even split of both in this charming homage to Astaire’s dazzling, game changing career. They simply ooze personality, wit and sex appeal. Far more meta and clever than a Hollywood homage should be, the show is bursting with insights on Astaire’s rise to the top, and features brilliant choreography from director Gareth Walker and assistant choreographer Scott Coldwell.

This breaking of the fourth wall begins with a wonderful Alastair Crosswell as Astaire, watching himself on screen as the legend,and facing the audience as both himself and Astaire, particularly in a jaw-dropping and audacious routine where he plays live drums and tap dances a call and response to the percussive beats on a screen next to him. His sure and fleet-footed dancing and playing is spectacular.

Manrara and Skorjanec are the ‘true’ stars though, beloved of BBC Strictly Come Dancing audiences, whether presenting a masterclass in flamenco for “Dancing In The Dark,” or the intoxicating salsa/rhumba cocktail for “The Continental.” “Slap That Bass”is a potted history of jazz dancing, with live drumming and upright bass. Manrara is frequently thrown around by Skorjanec, and her hem skimming glides on the floor cause audible gasps throughout the evening: such trust and precision between dancing couples!

The most inventive choreographic sequences come through the cheeky GI parody of “A Fine Romance,” bursting with charisma, camp and great storytelling (Aljaž can’t stop flirting with the ladies in the front row; Janette shoves him aside and dances with her gal pals instead) there’s a ‘golly gee shucks’ prom sweethearts’ courtship to “The Way You Look Tonight” and a schoolyard clapping routine integrated into “They All Laughed’s” Latin phrasing. “The Ritz Roll and Rock” even brings jiving to the fore, upping the raunch factor, although Astaire, himself a staunch Republican with conservative values, was never keen on too much flesh on screen.

As for the history of Mr. Astaire, his story unfolds on the screen in chapters, alluding to his obsessive attention to detail, with at least thirteen canes being provided by the wardrobe department, when he kept breaking them. He is never simply canonised, though, at times being described as a bit of a taskmaster with a temper. Voiceovers from Twiggy, Darcey Bussell and his own contemporaries like Gene Kelly, Cyd Charisse and Ginger Rogers all speak of his fearless innovation, in terms of being one of the first dancers on the silver screen to finesse a fusion of balletic steps with tap and jazz.

The only sticking point is with the two singers, Adrian Hansel and Miranda Wilford. Although the pair have beautiful voices, their style is that of contemporary R’n’B, which feels too pandering to a modern audience. Not terribly apposite for the 30s/40s era. Even they get in on the act, though, bringing a stylish vaudeville flourish to the Fred/Judy Garland scene. Manrara is no slouch on the vocals herself either, giving a gorgeous rendition of “Steppin’ Out.” Crosswell gives a more approximate croon in the titular role.

Never once dropping in pace, this exhaustive, exhausting show is a slickly honed machine, with a rather fantoosh, Art Deco-inspired design by Steve Howell. And oh, for a staircase that lights up neon pink as you strut down it! Sass, elegance and a lightness of touch from the cast, plus wry humour, make this an absolute delight for all ages. Skorjanec and Manrara may have not won Strictly of late, but on the strength of this spellbinding performance, in the words of the great Ira Gershwin: “Who’s got the last laugh now?”

Next
Dancing on the Edge