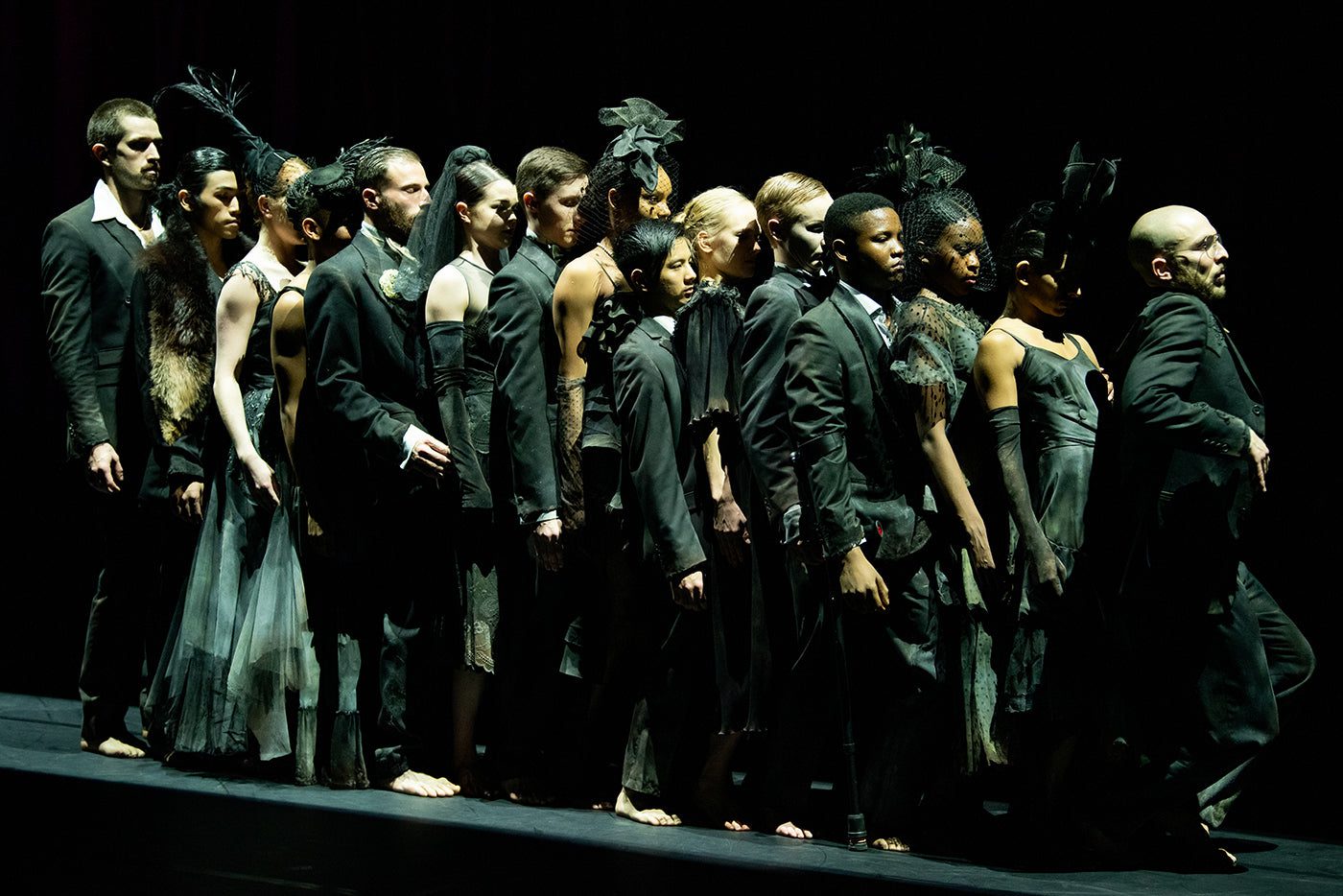 When it does, the audience are presented with a movement language combining the rigid and mechanical with the technical and virtuosic. The former is particularly engaging: moments when the cast assemble into tight phalanxes and shunt robotically around the stage make them look like a dehumanised army of mannequins, and a scene in which one performer sits and lip syncs to the accompaniment, her mouth sharply opening and closing, makes her appear like a ventriloquist’s dummy.

As to be expected in a work exploring the “pains and pleasures of the human body,” themes of sexuality and sensuality naturally arise in “Eye Candy.” Throughout the work there’s kissing, staccato pelvic thrusts, and sensual crotch caresses. While this lens was important for me when I first watched “Eye Candy” online, on second viewing it is the topic of the plight of dancers that catches my interest.

From a duet between two male performers who shuffle around stage in deep seconds as the audience snicker at their caricatured, panicked faces, to a scene in which a female dancer is covered by multiple hands and involuntarily pulled in different directions—a finger manipulating her eyebrow appears to be a direct reference to a similar moment in Pina Bausch’s “Kontakthof” (1978)—I can’t help but contemplate how, as a dancer, your body is not your own. It’s a tool for the entertainment of others, to be poked and prodded in technique class and observed by thousands of audience members onstage.

Next up, Ben Duke’s “Cerberus” is the standout work of the night. Using the three-headed, canine guardian of the underworld as a title and jumping off point, the work is a musing on mortality: a poignant selection of subject matter considering the painful losses many have suffered over the past two years due the Covid-19 pandemic.

Blending together movement, spoken-word, and comedy to create a humorous, and somewhat meta, take on the human condition, “Cerberus” sees numerous characters walk solemnly and stagger frantically in horizontal pathways—seemingly driven by the sporadic drumming of the onstage percussionist—until they “exit stage left,” which we are informed through spoken text is a euphemism for passing into the underworld.

The very first stage left exit of the performance prompts a funeral attended by mourners dressed in black suits, lace dresses, and ostentatious headpieces to emerge. One bemused Italian-speaking dancer is forced into giving a eulogy, yet he maintains that this is all just a theatrical ruse: the audience shouldn’t panic, the dancer they’re mourning is backstage and has a great solo in the next piece. Is he telling the truth? Or is he merely in denial? Whichever it is, he is determined to stop his fellow castmates going to the same fate as his friend, as he and his translator earnestly engage in a British bulldog-esque attempt to prevent performers from getting sucked into the wings throughout the performance. At one point, he even tries to dive stage left himself in an effort to emulate Orpheus’ famous underworld rescue mission.

Though comical, “Cerberus” is not devoid of sentimentality. In fact, it is the combination of both these aspects that makes it so potent. After laughing out loud for the first half of the performance, in the second I’m left in tears. The most affecting scene, for me, sees pairs of dancers connected by long ropes. While one half of each pair lies inanimate on the floor, the other struggles in a futile attempt to drag them back to stage right, and hence life. Accompanied by a voiceover in which a woman tells the audience where to find their bank details and asks them to “always remember that I love you,” it poignantly represents the inevitability of death, and physically embodies the emotional weight carried by the people left behind.

Rounding off the programme is Alonzo King’s “Following the Subtle Current Upstream.” Simply described as a “return to joy,” the piece in fact starts ominously with dim lighting and a soundtrack of clanging bells and a capella singing. However, as it progresses and a lively drum track kicks in, things get much more exuberant. Picking up different rhythms in the soundscore, Rambert’s dancers flourish and flicker across the stage in playful travelling sequences, maintaining precision in their movements despite their rapid pace.

As Rambert’s rendition marks the first time a British company has danced a piece by one of the U.S.’s most prominent choreographers, it’s understandable why it was chosen as the final performance of the night. However, following on from two recently created, strongly thematic pieces is a tall order for a 22-year-old work. As a result it comes across a little dated, especially in terms of its classical vocabulary and its traditional segmented structure of sequential solos, duets, trios, and full cast unison sections. Perhaps it would have fared better in a different line up?

Previous
Mats Ek is Back at the Paris Opera Ballet