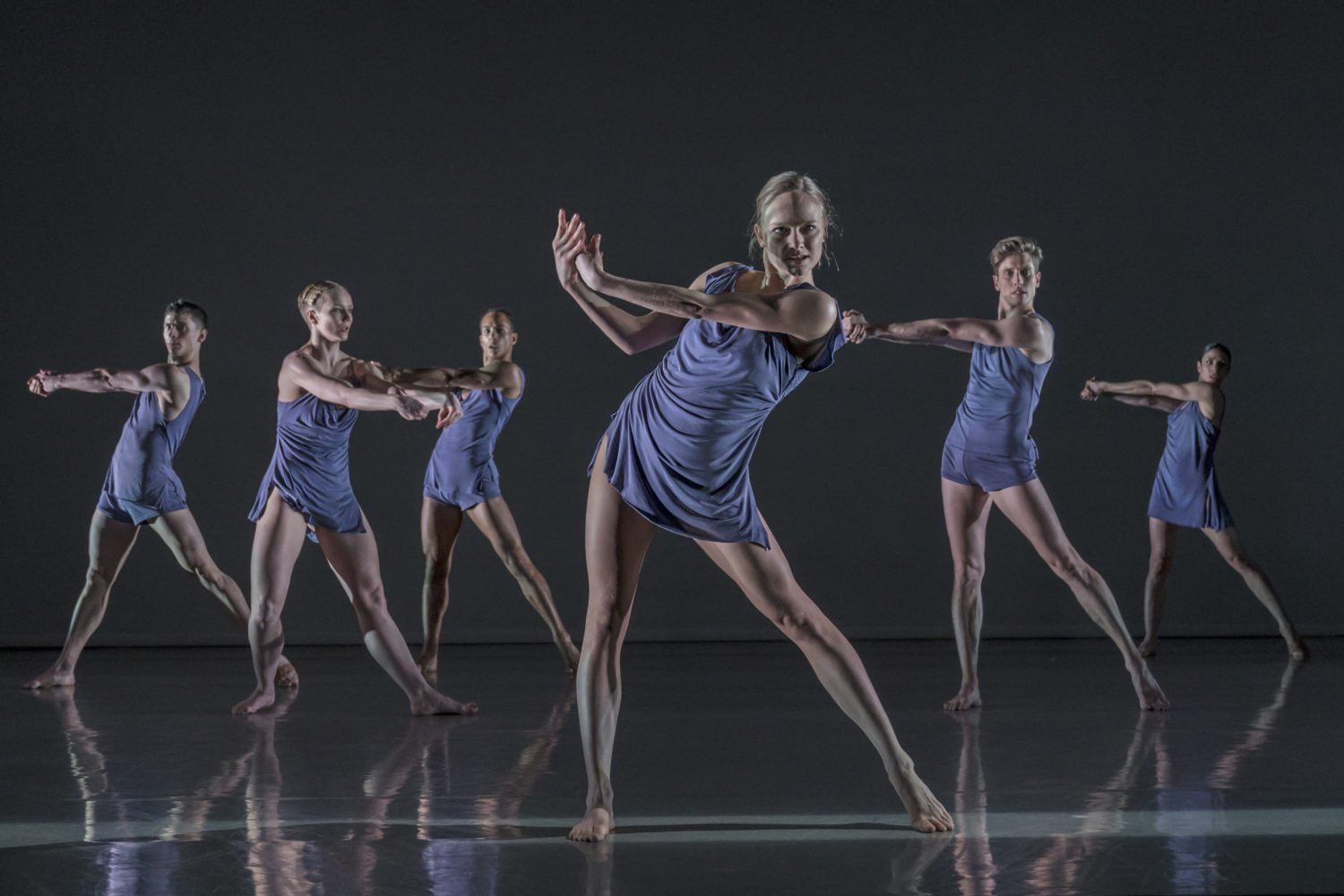 Close to the front of the stage, dancer Kym Sojourna moves with calm intensity. Her actions are a study in form and control, each extension aiming to stretch her body as if beyond the reach of her limbs. It is the opening to Wayne McGregor’s “PreSentient,” first created for Rambert 17 years ago when the company was under the direction of Christopher Bruce. Now, in this first triple bill from the company’s new artistic director, Benoit Swan Pouffer, “PreSentient” makes a return to the Rambert repertoire—and it is there to make a statement.

As the curtain rises Sojourna joins her fellow dancers, standing sentinel upstage; and the tone shifts. The company burst into action with a flurry of steps that run one into the other. Legs repeatedly pierce the air, catching at accents in the music. Phrases interlace as the dancers grasp arms and pull each other into space and into motion. It’s a style we have come to recognise as typical of McGregor; rapid, detailed movement driven by its music and the desire to push a dancer’s body to the limits of possibility. The close of the work, with the company together on stage, offers a final thrill of motion.

Choreographically, “PreSentient” is impressive. Yet somehow, 17 years on, that eye-catching, precise movement is not quite enough. To an extent it is personal taste but, as expertly constructed and detailed as it is, for me “PreSentient” failed to reach beyond its steps.

However, as the opening work in the programme of a company under new direction it is an intelligent choice. Here was a clear display of the technique and form on which, over the last few decades, Rambert has built its reputation. A statement of technical ability but also, perhaps, of reassurance for those audience members wary of change.

Swan Pouffer is, after all, a director with a vision for the future. In his hands, the company is once again re-modelling itself. Enter Swan Pouffer’s first commission for the company—Marion Motin, a choreographer better known in the hip hop and commercial worlds.

Her resulting work, “Rouge,” presents Rambert in a whole new light. With one amped-up guitar riff, the crisp precision of McGregor is blown away. Dry ice billows moodily across the stage and puffs in smoky tendrils from the guitarist’s low-brimmed hat. When the dancers spring to their feet, it is only to fall to the floor again amidst clouds of haze. The atmosphere is charged, the movement minimal, more akin to that of a gig or music video. The costumes, individual to each dancer, appear haphazardly thrown together; a mix of colours, prints and accessories. Like the work itself, they are cool and nonchalant.

Like the hangers on at the grimy aftermath of an all-night rave the dancers progressively find their feet—and each other. Clothes are shed and the work descends into choreographed chaos. They fall into phrases, strut the stage like runway models, taunt and tear at each other. It’s seduction, risk, carelessness; a straight up middle finger to conformity. Under the rouge-tinged light that floods the stage, music engulfing the auditorium, these seven dancers give their all. If there was ever a work to mark change, this minimal, edgy, but impeccably staged work from Motin would be the piece to do it.

The programme closes with “In Your Rooms,” the work which led Hofesh Shechter to become one of the most prominent names in today’s contemporary dance world. It was also a work that led to the first meeting between Pouffer and Rambert’s chief executive/executive producer, so its inclusion is perhaps a nod to a personal past as well as the future of this company.

Like McGregor’s “PreSentient,” it has all the marks of the kind of work we have come to associate with Shechter’s distinctive choreographic style. The upper body curved and the pelvis dropped low towards the floor, the movement appears drawn from within the body; escaping briefly outward then drawn back in. In the low lighting, and to a score that mixes voiceover with an electronic soundscape, strings and percussion, Shechter creates the dark, moody atmosphere that has become his signature.

It’s yet another style for the dancers of Rambert to adapt to and, while some appear more at home with Shechter’s movement than others, they once again prove their versatility. In many ways, seeing Shechter’s movement on dancers that are not part of his company adds a fresh nuance to the work. Amongst the various images and scenes that flare into being, a duet between Miguel Altunga and Hannah Rudd offers a moment that is more human; an insight into a confused and emotionally taught relationship. It’s a work in which the dancers appear to fight for something beyond the body, driven by a need for escape but also by a sense of community; dancers and musicians working together and in response to one another.

“In Your Rooms” may have been made 12 years ago but this self-questioning work, one which simultaneously tries to make sense of what is happening on stage while drawing in questions about society and the world we live in, feels just as relevant today.

From technical McGregor to earthy Shechter, to cool and commercial courtesy of Marion Motin, this is a company of dancers that can do it all. Most importantly though, here is a company ready to move forward. Adapting, as it has many times over its 93 year history, for the dance world it finds itself in. Through this mixed programme of works, we see a company that hasn’t lost sight of its past (if a recent one, in this instant) but is also of and ahead of its time. If that can be taken as a sign of things to come then, as Rambert adapts once again, it seems to have found the right balance.

Previous
Between the Lines

Next
A Twisted Tale