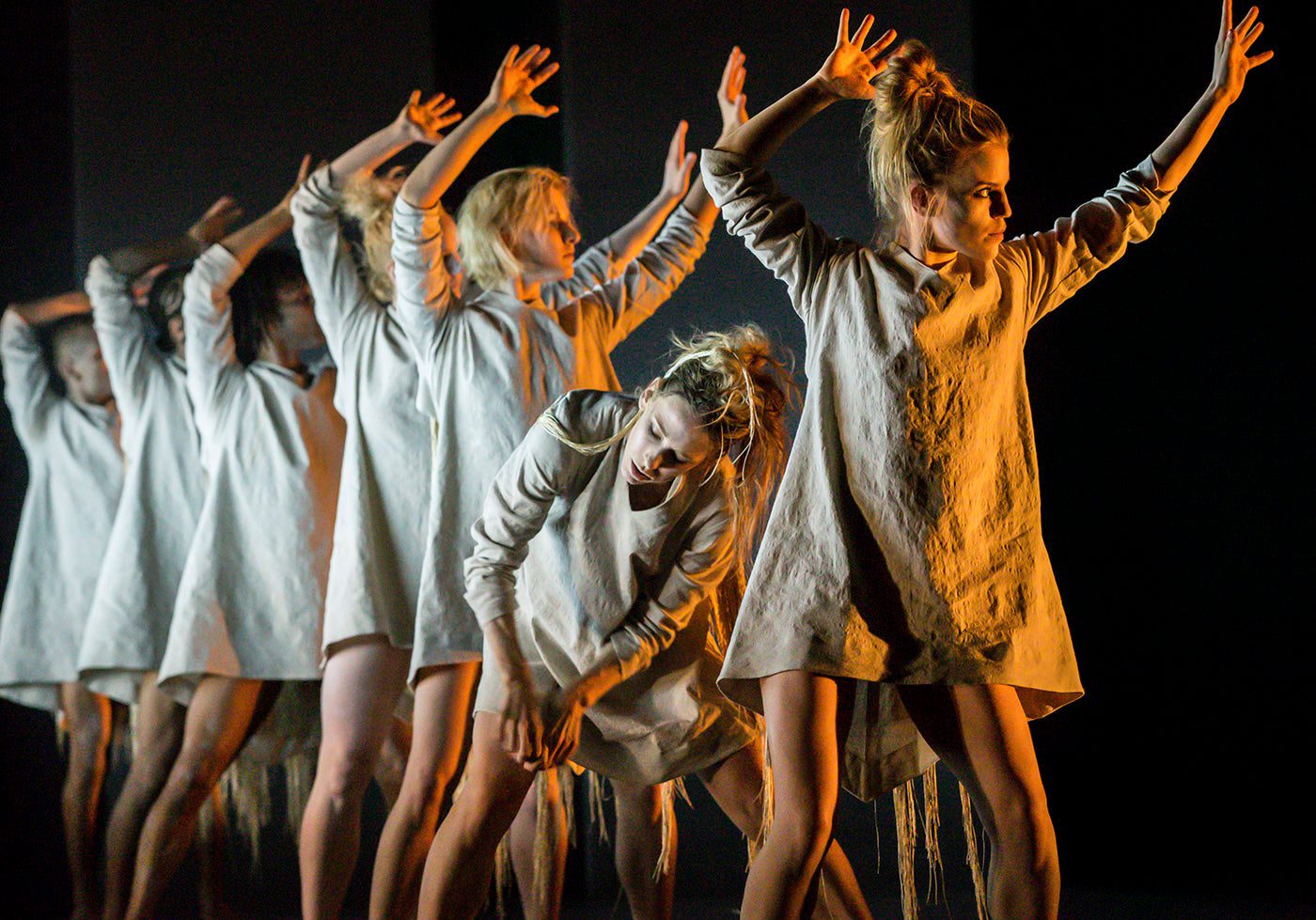 This year sees the 400th anniversary of Shakespeare’s death, a cause for many in the arts to celebrate the great bard’s life and works, and the latest triple bill from Rambert, “Murder, Mystery and a Party,” marks the occasion with its own contribution. Choreographer Lucy Guerin has created “Tomorrow,” a new work for the company based upon Macbeth, following her recent collaboration on the same play with theatre director Carrie Cracknell at the Young Vic.

“Tomorrow” is Guerin’s development of this project and contributes to the ‘murder’ element of Rambert’s bill. The stage is divided in two, split by a strip light embedded in what appears to be concrete. On one side, a group of dancers in cream nightgowns twitch and shudder, their faces pale, their gazes distant. They appear unaware of their juddering bodies, their appearance reminiscent of the inhabitants of a Victorian asylum.

On the other side, the dancers move with direction and purpose. Dressed in black, their actions are naturalistic, based around simple gestures as if silently conversing with one another. Occasionally, tableaux recognisable as scenes from Macbeth present themselves—Banquo’s ghost appears amidst a drinking party; Lady Macbeth wrings her hands above her husband’s head, cleaning them of their bloody deed.

Artistically, it’s intriguing: The divided stage presents a striking image of two contrasting psychological states, an exploration, perhaps, of the state of mind that pushed the Macbeth’s to murder. Yet the silently acted scenes of the black clothed dancers pale in comparison to the physicality of the Witches (the programme explains this is the role of the nightgown-clad group) and their minimal gestures are easily passed over, especially when attempting to focus on two scenes simultaneously. It’s an idea that simmers with a sense of the play’s tension, but its initial set-up aside, “Tomorrow” never delves deep enough to really convey the darkness of Shakespeare’s tragic psychological drama.

Alongside the premiere of “Tomorrow” Rambert present two existing works from their repertoire, and it is these that really allow this accomplished company of dancers to shine. Shobana Jeyasingh’s 2014 work for the company, “Terra Incognita,” opens the bill. Inspired by early exploration and the unknown element of such journeys, it’s a technically challenging work. Strong lines and angled forms combine with subtle influences of classical Indian dance, most noticeable in the dancers’ delicate hand gestures. It’s a movement style that is definably Jeyasingh’s and it’s thrilling to watch dancers move in this way. While the theme of the work remains abstract, the partnering in “Terra Incognita” really captures the attention. Here the movement becomes more intricate and alongside the traditional male/female partnerships there are a series of male/male duets. It’s hardly unusual for men to dance together, but while the male/female duets exude equality, the male/male partnerships appear to adopt the structure of a traditional pas de deux. It’s an intriguing balance of power caught in movement.

The return of “A Linha Curva,” which helped the company win the 2010 Olivier Award for Outstanding Achievement in Dance, is the highlight of the bill. Itzik Galili’s samba-inspired party piece is an explosion of energy and colour. To the infectious drumming and vocal rhythms of the onstage percussionists the dancers add their own shouts and whistles as they shimmy and shake their bodies, shifting between deep pliés à la seconde and daring leaps. The company are joined by students from the Rambert School of Ballet and Contemporary Dance to fill the stage with a 28-strong cast. Their timing and precision in the sections of mass unison is impeccable, and while the piece revolves around complex patterning—the dancers must position themselves within an ever-changing grid of coloured lights—the overriding sense of this work is one of fun and abandonment. It’s a chance for the dancers to let go, and they fully embodied “A Linha Curva’s” fiesta feel.

The playful, competitive vibe between the company, as groups of dancers attempt to outdo each other with jumps and acrobatic tricks, adds to this atmosphere. There’s a moment where the men leap-frog each other in high, tucked jumps, another in which five male dancers vie for the attention of one female, dancer Hannah Rudd, who puts them in their place with her own flirtatious solo. “A Linha Curva” is a loud, vivacious work and it provides an uplifting end to Rambert’s diverse triple bill. It’s difficult not to leave the theatre with a smile on your face.

Next
Leaps and Lost Waltzes