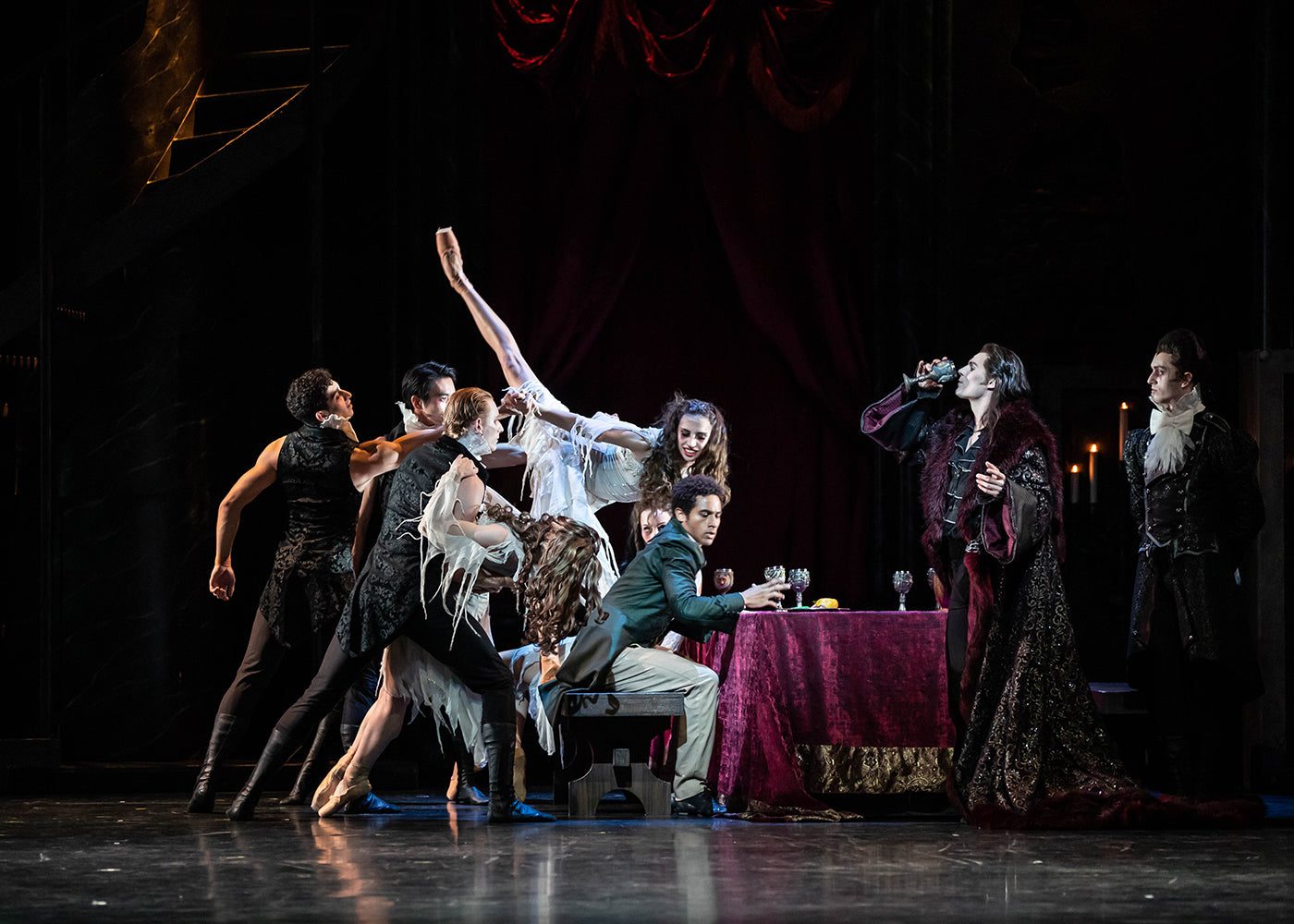 Patricio Reve and Joel Woellner with the vampires in “Dracula” by Krzysztof Pastor. Photograph by David Kelly
Madelyn Coupe·
Reviews
·2

A dark and passionate night two years in the making. Queensland Ballet’s “Dracula” finally premiered after it had, like many other productions, fallen victim to the inevitable pandemic rescheduling. It was, however, well worth the wait. Choreographed by Krzysztof Pastor—former Director of the Polish National Ballet and Lithuanian National Opera and Ballet Theatre—the ballet presents the gothic tale of forbidden passion in the most sumptuous manner possible.

One of the true highlights of the performance was the tango danced by Dracula and Jonathan Harker in Act One. It occurs shortly after the young solicitor arrives at Dracula’s castle. There to finalise the Count’s purchase of an English estate, Jonathan accidentally cuts his finger, and the blood that drips from the wound is an exigent temptation for Dracula. What follows is a sinful tango that depicts a predator trying to catch his prey . . . and the prey questioning whether or not he wants to get caught. Joel Woellner as Dracula was sublime to watch. He presented a complex and nuanced character that resembled a vampiric Jekyll and Hyde—a being torn between succumbing to his monstrous nature and trying to rectify the sins of his past. It was also a delight to see another side to Woellner’s artistic capabilities, one that is significantly different to the charming princes he portrays so well. Patricio Revé as Jonathan was a breath of refined fresh air. His surprise and confusion at Dracula’s erotic pursuit fed exquisitely into the underlying Victorian anxieties that bleed through the story.

Dracula is an active expression of transgressive sexuality. His presence as a seductive monster from the East threatens the Victorian sensibilities of the London inhabitants, especially the young (and somewhat “impressionable”, as they would say) women who appear onstage. He exists outside the boundaries of polite society—not just physically but morally and religiously. He sexually entices men and women, presents his Brides with an infant to satiate their hunger, and openly encourages his parasitic offspring’s licentious behaviour. A stark contrast to his Victorian counterparts. Where Dracula is sumptuous excess, the others—Jonathan, Doctor Seward, Van Helsing, Mina, and the Victorian ideals they represent—are internalised restraint. They exist in a society that rejects overt displays of passion. Their lives are governed by strict social codes. Their interactions are heavily scrutinised.

Pastor’s production carefully reflects these contextual differences through several performative elements; a nuanced manipulation of movement styles is one of them. The Victorian characters in this ballet dance, in the traditional sense of the word, classically. In the ballroom scene, couples waltz around the room with refined technique. They keep a respectful distance between themselves. Not one hand is out of place. The costumes, designed by Phil R. Daniels and Charles Cusick Smith, add to this sense of restriction. They are, arguably, the physical manifestations of the societal constraints placed upon the characters. For the women, they are tightly restrained by corsets and multiple fitted layers of fabric. Their hair is pulled back, and not one strand is out of place. Even if the Londoners wanted to move more freely, their clothing prohibits them from doing so. The confinement placed upon them is paramount.

It was wonderful to see the magnificent talents of Liam Geck expand with his portrayal of Renfield. Geck is a dancer whose dramatic range and capabilities are quite singular in a company like Queensland Ballet, and it is hard to tear your eyes away when he is onstage. A special mention must also go to Chiara Gonzalez’s depiction of Lucy. Her transformation from a young Victorian lady to horrific bride was fabulous to witness.

Despite the glamour of the gothic spectacle, there are a few moments in the ballet that lacked dramaturgical cohesion. The detail as to why Jonathan travelled to Transylvania in the first place did not directly translate, nor could the audience clearly see what Dracula handed Jonathan that cuts his finger. These are two key markers that establish the tone and timeline of the story—and the grey area around them points back to a larger conceptual issue at hand (one that extends past “Dracula” and to the adaptational genre more generally). “Dracula” is a complex and nuanced text. Adapting it for the stage, especially in a balletic context, is by no means an easy feat, and for the most part, the production’s narrative flowed seamlessly. Although, the nuances of the source material are dependent upon the audience either knowing or actively reading the synopsis before the performance. Whether audiences will adjust to this method of adaptation, only time and future revivals will be able to tell.