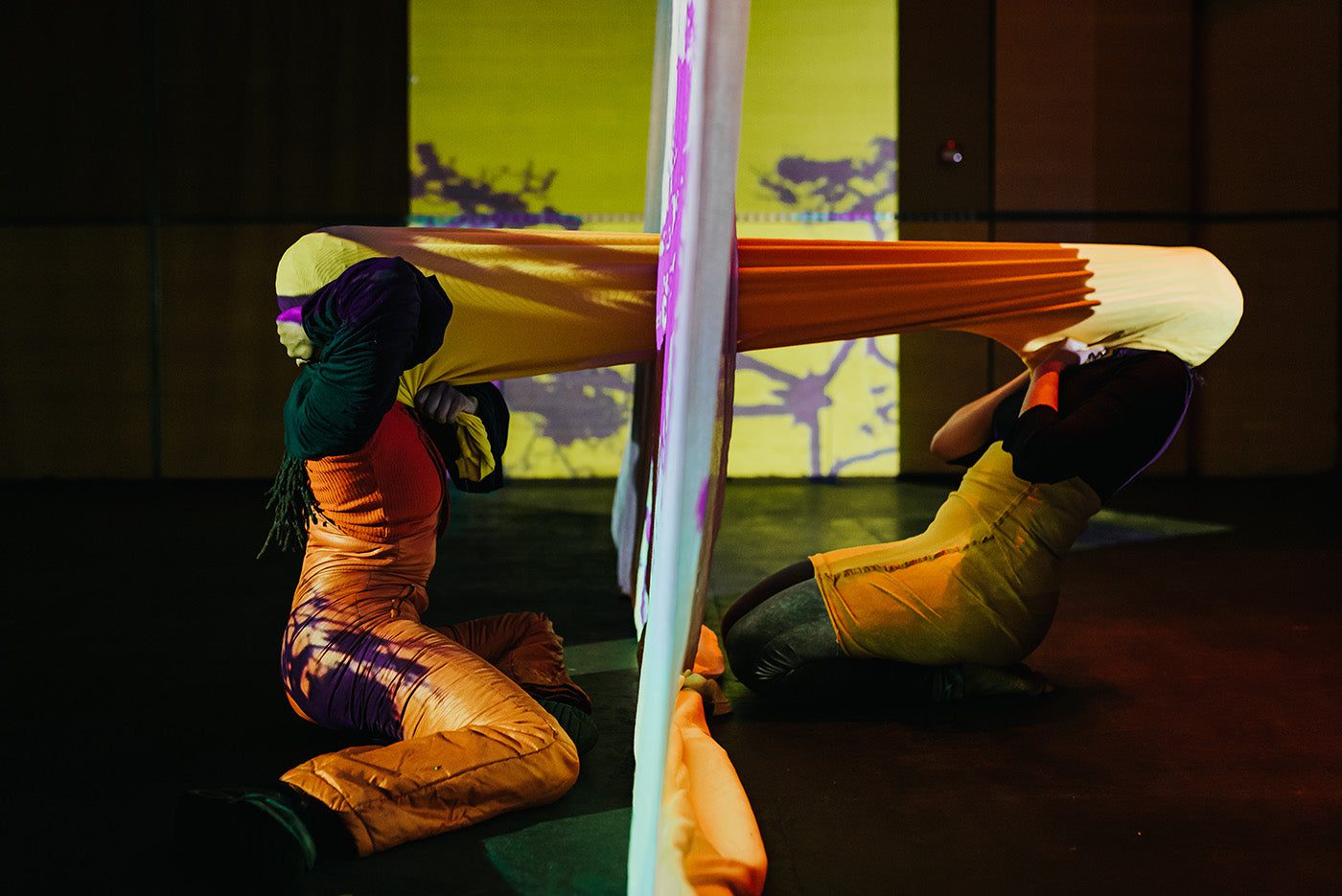 At once an art installation and dance piece, “Ghost Dimensions” cannot easily be pigeonholed or put into neat niche categories. It works almost like a puzzle, split into two halves with the incredible design by Tseliso Monaheng projected onto two sheets. It’s all about duality. These two component parts can be experienced by the audience in one sitting from one side of the room, or explored around the other. One side is rendered in neon colours, showing cityscapes, obscure figures and trees; the other is in negative like a reversal of the production. Both sides of the images meet up in the middle, as do the brilliant dancers, Mele Broomes and Ashanti Harris.

Broomes appears from the side with a black jumper tied around her head, making her seem like a shadow, symbol of anonymity, obliteration of self and perhaps figure of incarceration. She is splayed out like a starfish, moving steadily and with stealth: a creeping figure haunting the present. She is a potent, uncomfortable reminder of the stories of African Caribbean herstory conveniently airbrushed out of textbooks to suit white colonial narratives, the struggle to be heard, recognised and celebrated in the present day. An unearthly, deeply troubling presence, she inches towards the sheets, and is covered with another stretchy yellow material, shared with Harris (who is positioned at the other side).

Now, they’re in the same area onstage, joined at their heads like a beast to Healer Oran’s industrial sounds which resolve into frantic, hypnotic beats. As the two emerge from the sheets, they grapple and clinch together, still covered by material, still invisible, but for their flexing bodies in a kind of anti-waltz. Together, they invoke René Magritte’s eerie artwork, The Lovers II with figures wearing sacks over their heads, unable to communicate, but sharing the same space. Past and present ghosts, archive, analogue, stereo, 3D, are now present. Imagery of chains suddenly appear on the sheets, an ugly reminder of slavery, the constant fight for freedom, and exploitation which is still an ongoing global problem, even in the twenty-first century, where people are still being illegally trafficked.

This is a dense, profound interrogation of female black bodies taking up space, alluding to lived experiences. Project X describe the piece as an exploration of “bodies as repositories,” where human beings carry their own unique narratives and experiences within them, for good or bad.  The internal is thus made external through this innovative choreography, created by both dancers. Eventually, the duo take off the masks and perform at either side of the sheets and room, angry movements morphing into defiant, elegant and sensual routines with Afro-futurist/urban phrasing. Broomes and Harris consistently trade places throughout the performance, like ego and id. The energy of the dancefloor as a gesture of freedom and a place for self-expression permeates throughout the second half of the performance. They cast beautiful shadows on the walls, flanked by sunrise orange, sunset reds.

At times, there is a psychedelic vibe with vibrant neon hues seemingly melting around the walls like lava lamp fluid, and Harris and Broomes’ figures blending into each other, becoming enlarged as one complete unit around the stage area. They put on heavy neutral coats which enable them to become camouflaged within the space, taking on the colours and shapes surrounding them, disappearing once more into the background as though invisible—just like ghosts, as they began. But the shadowplay, skillfully integrated within the choreography, sound and visuals, means the pair become a futuristic, sci-fi emblem of hope, where technology is nothing to fear, but rather, a tool for progress.

Previous
The Creative, the Curious and the Courtly