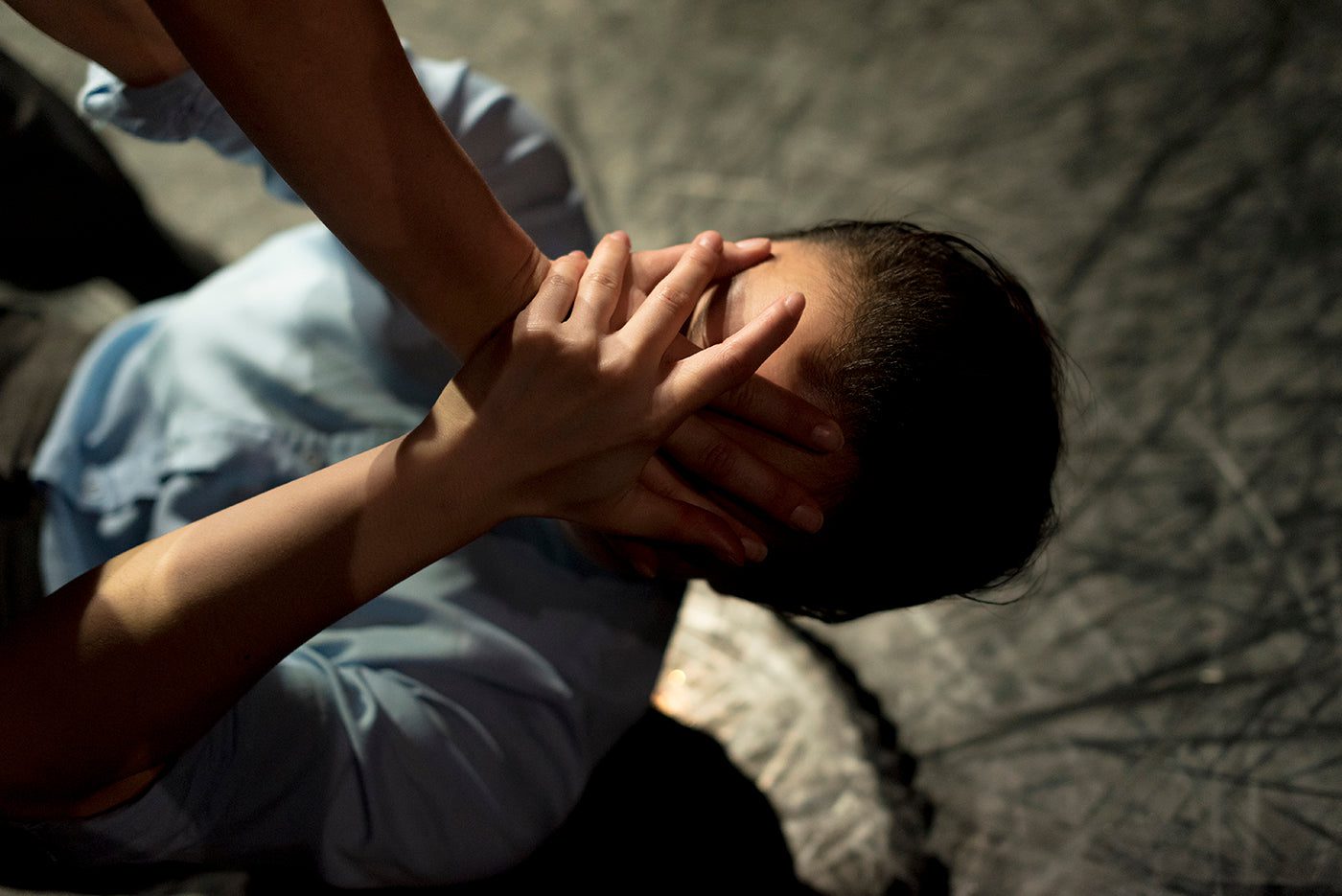 This double bill has similar thematic concerns: group dynamics; ritual, intimacy, humanity. In spite of very different approaches, there’s a sense of being at one with, or up against, the elements, of nature and rebirth, and our complicated relationship with the planet. As issues around climate change have been pushed front and centre in the news, these two contrasting pieces feel very much of the zeitgeist.

It’s perhaps impossible to think of “The Rite of Spring” without ruminating upon the impact of Nijinsky’s original work, or indeed Bausch’s more recent updating of the piece. There’s so much historical weight involved: the infamous riots; outrage and the sense of iconoclastic approaches which refined and redefined notions of both movement and music. So Leeds-based company Phoenix Dance Theatre’s new adaptation of “Rite,” choreographed by Haitian choreographer Jeanguy Saintus, is a bold venture. It takes a brand new element and weaves it into the narrative: a Haiti vodou ritual (a kanzo ceremony).

Here, there is no maiden to sacrifice to the gods of Spring; instead a male dancer (Carlos J Martinez) is singled out by the other dancers and presented with the robes. This suggests the rise of gender fluidity and non binary roles. Everybody has a part to play here. Elsewhere, the company move in pairs like classical statues made sentient, wearing draped gowns (created by Yann Seabra) which swish as they move, white like Greco Roman, but tailored at the waist, revealing block primary coloured panels underneath. These stunning costumes do a lot of the work too.

The company rear up like wild horses, take sacrificial offerings in velvet cushions and hold hands aloft, wearing gloves which give the appearance of stained flesh. Indeed, transgressions and warlike postures drive the motions. The whole ensemble, when dancing together, appear to daub confessions on the floor. Hands that have done bad deeds can never be clean. Contorted, twisting, the bodies grub on the ground, knotting and tangling. Occasionally hands close together as a business deal. The sense of inner torment is made manifest through elongated Butoh-like extensions and meditative scenes which provide the requisite dreamlike sense of otherness.

Yet for all of the jarring isolations and group work (Natalie Alleston’s ferocious, sexually-charged, spasming solo, the impressive procession scene, a writhing caterpillar solo) Saintus’ choreography doesn’t always seems equal to the power of Stravinsky’s thrilling, bombastic score, and the often opaque storytelling doesn’t entirely satisfy in the message it’s trying to convey.

Far superior—and coherent in its storytelling—is the sublime, rich “Left Unseen,” created by French choreographer Amaury Lebrun. It’s the first piece he has worked on with Phoenix. Interrogating life without senses (blindfolding is a recurring motif) and using lots of extraordinary unison work, Lebru brings an almost improvisational urgency, and relentlessness, to the piece. Brittle, exhaustive bursts of movement see the group’s thrashing arms leaving vapour trails behind.

This is contrasted with eerie stillness, using all the capricious logic of transient states of being. A pas de deux between two men, Prentice Whitlow and Aaron Chaplin, is spectral and elusive. It’s the female/male pas de deux which is more gritty: Vanessa Vince-Pang, later dancing with Whitlow, is violent, beating him and shoving him away from her, in spite of the obvious difference in their sizes. It’s these lucid, troubling sequences which provide disruption to the fluidity elsewhere.

As kaleidoscopic, gorgeous rippling configurations dominate the first part, so, a more meditative pace eases into the second. Resolving into vulnerability and calm, the ensemble work as a whole unit, the epitome of collaborative trust, intimacy fuelled seemingly by pure gut instinct.

The whole piece seems to be founded on the question: when we close our eyes, or lose our senses, what remains? When we trust in our own instincts as animals, is humanity itself lost? Lebrun never seeks to answer these, but merely provides the tools for discourse.