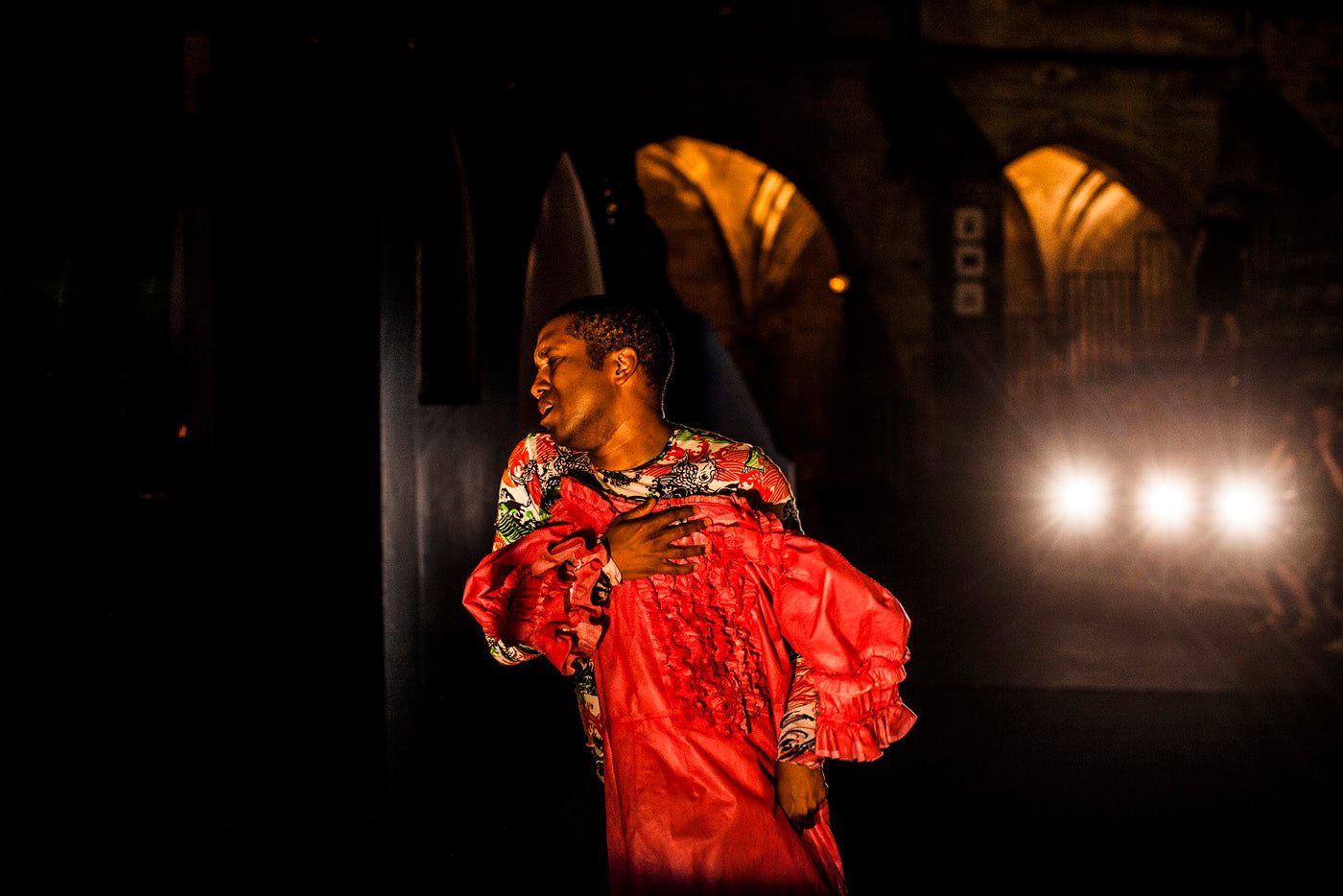 Two back-to-back shows in Philadelphia’s 2018 Fringe Festival had me thinking in compare and contrast mode. One, full of lusty life and joy, reached out to the audience to join in the fun and total experience, and the other devoid of anything but interior dialogues, often inaudible, blanked the audience out.

Trajal Harrell’s “Caen Amour” premiered at Festival Avignon 2016 and is in a way a wonderful follow-up to his 2014 Philly Fringe debut with “Antigone Sr.” / “Twenty Looks or Paris is Burning at the Judson Church.” The 2014 work examined the overweaning impact of the Judson Church movement of the 60s on contemporary dance and quickly drew an adoring audience base here.

As sideshow barker, Alex Tatarsky, led us through a maze of objects, inviting us to sit on the floor or up in the seats. There is thingness all around us—or what is called “object theater.” We passed an azure-painted Moorish-style wall slashed diagonally across the performance space, stepping through floor cushions and other detritus placed with care. After settling, we became aware of Harrell in the wall’s doorway, dancing as if no one was watching, as if alone in his bedroom. The sensuous, almost shy, dancer snaked in slow, tortured turns, his face alternately contorted in ecstasy or agony, establishing an intimacy that held through the show.

The hoochie-coochie begins—in Harrell’s dreamy imagination. Nicely, the term hoochie-coochie first appeared after the Philadelphia Centennial Exhibition in 1876, presaging vaudeville and burlesque, which had huge successes in Philadelphia and enjoys a resurgence here today.

Harrell revises scenarios throughout his oeuvre reaching back to 1999. He bleeds eras, one into another, until he sweeps you into a phantasmagoria that somehow makes perfect sense. Yeah, just like in his—or your—dreams.

Tatarsky explains, “the hoochie is in the front, and the coochie is in the back.” The performers affirm this in various ways. Thibault Lac and Ondrej Vidlar, two of the outrageously titillating dancers from “Antigone Sr.,” are slightly more demure in this heady brew of vogueing and hoochie-coochie, as they appear and disappear around the wall. Lac dances as freakishly as a preying raptor—the antithesis of “The Dying Swan”—yet later his arms flow as watery as Pavlova’s.

Lac and Vidlar vogue barefoot on demi-pointe (you have to imagine the stilettos this time) coyly stepping through the door in each new costume so you can grasp each fashion joke, and gasp at its cleverness before they exit the runway. Lac opens a dinner jacket he holds against his chest as if he were wearing it, then later wraps it around his waist like an apron. As he exits, we see his bare bottom. Vidlar slings jeans legs over his shoulders so the pants now look like some shabby priest’s vestment. All the while, the two hold Mona Lisa smiles. What secret are they hiding?

Perhaps it is Perle Palombe dancing behind the wall where Tatarsky leads the audience to view her. She dances naked, banging a tambourine on her hip, a distorted silhouetted figure in a window. She later bursts out slapping her breasts and returns in a black ruffled fabric scooching it all around to reveal parts of flesh beneath.

The reinvention of each glittering or sheer fabric into headdresses, farthingales, sarongs, is simply dizzying (costumes by Harrell and the performers,) and the music choices delicious, when not outright hilarious.

Harrell named the piece in part for the French town he has been living in since 2009, Caen, because it sounds like ‘Quand Amour’ or ‘When Love?’ In Spanish, it means, “to fall,” and I did fall in love with this work and with its performers.

At Meg Foley’s “Undergird” at the Icebox in the Crane Building the next night, it was more like falling asleep. To be sure, that may have been part of Foley’s intent. The monochromatic set used white upholstery batting over movable steel frames and upholstery foam rubber squares. The four dancers wore baggy gray jumpsuits slashed to the hips to reveal scarlet undertogs (by Allison Pearce.) Drew Kaiser, Jungeon Kim, Annie Wilson and Foley whisper garbled monotone narratives; perform minimal dance moves to intermittent and interminable silences.

While Harrell’s work had three men and one woman, and examined feminism and the issue of men dancing as women, Foley’s had three women and one male dancer. In “Caen Amour” the woman is naked and exoticized. Regardless of gender, “Undergird’s” characters seem depersonalized and symbolic. In both works, the lone opposite-gendered dancers become transactional figures, one for exoticism, and one for dance and color. Once Kaiser danced to flashing lights and the first music near the end of the work—a disco tune—I saw him as a counterpoint to Palombe’s female seductions, the colorful male of the species preening for the women.

Each work had a kind of overseer or wizard behind the curtain. For “Caen Amour,” Tatarsky; for “Undergird,” lighting designer Natalie Robin, who brought much-needed life and warmth to the polar feel of the performance space. Individual monologues were about death and grieving. Annie Wilson delivers hers with quintessential sweat and fierceness. But in the end, watching Foley touch her shoulder, push her arm out towards the audience while describing each move was more like a near death experience for us than a dance. The audience shuffled out in confusion.