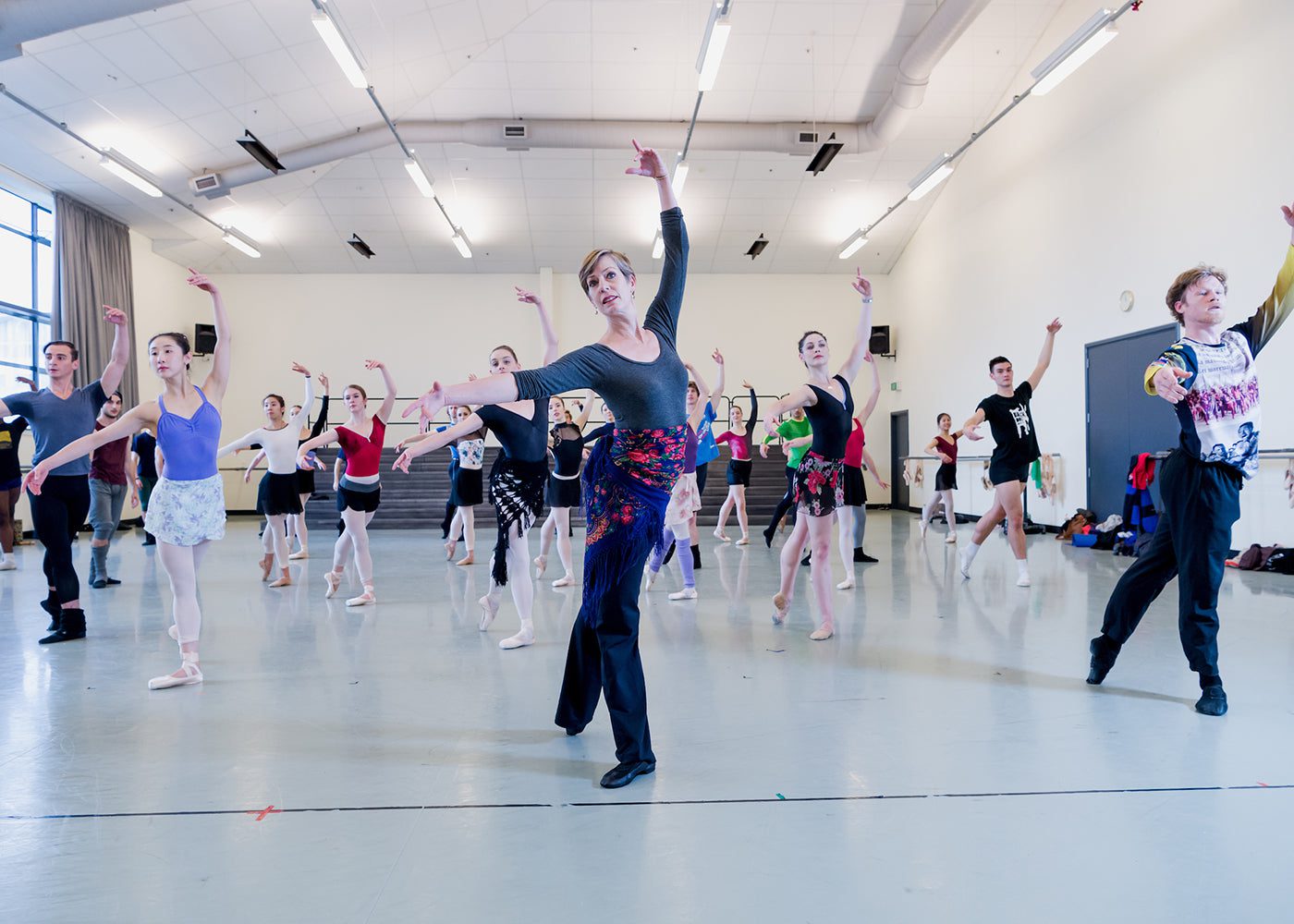 Patricia Barker, former star of Pacific Northwest Ballet became artistic director of Royal New Zealand Ballet in 2017. Before taking up the position, Ms. Barker, who would be the third AD of the company in a decade, had only visited New Zealand once previously for a fleeting 72 hours. Ms. Barker has since brought stability to the company and has sought to cultivate an environment in which dancers can develop as artists. In this condensed version of our conversation, Ms. Barker discusses how the RNZB has fared during Covid, supporting female choreographers, and her vision for 2021.

How are you and how is the Royal New Zealand Ballet? Are the dancers back in the studio?

We all here at the ballet are feeling much better, with renewed spirit. We’ve been in the studio working on “Sleeping Beauty.” For our production of “Venus Rising,” we got all the way to dress rehearsal before we went back into a lockdown and so, that didn’t make it to stage, which was a horrible shame, and a horrible blow to the dancers for all the hard work they’d been doing. But right now, we’re feeling optimistic. I know we have the spirit of dance in our hearts and can’t wait to be on stage before the end of this year.

What happened in March when Covid emerged? And how did the Royal New Zealand Ballet deal with going into lockdown?

So, I had just gotten back to New Zealand from the United States. I had hired dancers on an audition tour, and we were ready to embark on a trip to London. And every single day, they were saying, ‘I don’t think we’re going to be able to go’ and I was like, ‘No, it’s going to be okay, we’re going to be fine.’ Very optimistic. Well, I was wrong. But it wasn’t okay. We didn’t do “Venus Rising.” We had dancers that were stuck because we had just come off Christmas holiday, so, they weren’t back in New Zealand yet. The dancers that I’d hired on that audition tour [in the U.S.], they couldn’t get into [New Zealand]. In fact, they’re just getting in now. Visas are slowly being sorted, all of these things.

What did the dancers do in lockdown? Did you have virtual classes or how did they stay fit?

Well, I was very diligent. I know a dancer’s mindset. I believe that as a dancer, I had a very strong mental approach to what I did. And therefore, I wanted to make sure that the dancers had purpose and that their life, their days, had structure. A dancer’s day is structured from when you get up to when you leave the studio, what rehearsal you go to, what pointe shoes you need ready. I was lucky that my home is large enough that my husband moved all the furniture over to one side and I was able to give Zoom class everyday to the dancers. Some of them I saw in their bedroom hanging onto, you know, a hook, or kitchens became very popular places with countertops. In fact, one of my beautiful dancers, Sara, at one point, she’s taking class and we’re talking about different things and then I hear the buzzer go off to the oven and she says, “my cookies are done!” She took them out of the oven, and we took a cookie break. So, there were some windows into real life things.

But what I really wanted to do was work hard on keeping us all together. We created mat classes and Pilates sessions and some men’s workouts. We even did pointe class where it was just about relevés and working the toes, so they would wear their shoes. We did as much as we possibly could to keep them entertained, to give them purpose, and to give them hope that they would be dancing one day and that they needed to be ready.

Much of the world remains in that period where dancers are in their bedrooms, doing class. It’s quite incredible to hear that your dancers can return to the stage with an audience—and for the rest of the company as well.

It is. And I think that’s the difference here in New Zealand or Australia—because we all have 52-week contracts. Companies that have laid off their dancers and furloughed them means that the dancer is on their own and that’s a very scary place to be for an artist. And it’s going to be hard on the artistic director, too, because you’ve put together this great team of artists that you believe in and here they are slipping through your fingers because they need to find jobs, they need to do something. So, I think it’s hard all around for ballet companies. A musician can go into their apartment and really play. If we don’t have space, if we don’t have a floor, if we don’t have proper footwear, it really takes its toll on us physically, which then of course takes its toll on us mentally.

Absolutely. And that will perhaps be one of the biggest areas to rebuild I imagine; not just the physical but also the mental health of so many artists as we re-emerge from this.

Exactly. I think of the book, A Tale of Two Cities: “It was the worst of times, it was the best times,” because in the worst of times, there’s an imagination that releases all of that talent and that creativity. It’s exploding all over the place with certain types of choreography or smaller performances, digital platforms, the rebirth of connecting with audiences, not just close to you, but globally. I think maybe dance can become even greater globally as an art form.

I love that analogy. You had a long and wonderful career as a principal dancer at Pacific Northwest Ballet. Do you think that that has impacted who you’ve become as an artistic director?

I don’t see how it couldn’t. I had wonderful artistic directors, Kent Stowell and Francia Russell. And to grow up with the two of them in a company that continued to grow and find more acclaim throughout my career, I got to experience a lot of things within one company, but I also got to experience the dedication that my directors had for the talent that they had in the room. I had 27 years in the same company, plus, I was the product of the [Pacific Northwest Ballet] school. That’s a long time with a couple of people [as artistic directors].

That’s incredible. When you arrived, the Royal New Zealand Ballet had seen a number of artistic directors in quite a short period. You seem to have brought a stabilizing effect to the company. Do you think that is due to the longevity of your career with one company and two co-directors?

I do. I will say I agree with you right off the bat. Stable companies are the only time that artists really can reach their full potential. And not only were there quite a few artistic directors, there was no permanent ballet master for quite a while. By knowing the artists intimately and over time, you know how to get the best out of them, and you know also how to guide them, how to support them, and give them space to explore their own talent. And I do believe that being in one company myself that my directors allowed me that. And so, I try to bring that to my own dancers.

Also, just to add, what I also brought more than three years ago was a fully assembled creative team—myself as Artistic Director, ballet masters from Grand Rapids [Ballet, in Michigan], which the Company hadn’t had previously, along with my husband Michael, who is of great support to me. So we all knew how we worked together, our strengths, our weaknesses. So in that sense, there was no getting to know you period in our team, and I think that brought a sense of stability relatively quickly.

At the start of 2020 you announced a whole year of work choreographed by female choreographers. With Covid we’ve have had some disruption to that vision. Is that something that we’ll see in 2021?

It is not. In fact, when I went down that path for 2020, it wasn’t something that, initially, I said, ‘Oh, I’m only going to have women choreographers.’ It fell into place naturally. I’ve always been a big supporter of women choreographers. Even my time as a director in the United States, over 50% of our works were choreographed by female choreographers. I didn’t see a difference between a female and a male—I saw the talent in a choreographer that I’ve wanted to give them a platform to hone their craft, explore.

I think at this point in time, I wanted to make sure that we had classical ballet at the forefront. So, we’re bringing back “Giselle” at the beginning of the year. We’ll be closing with Liam Scarlett’s, “A Midsummer Night’s Dream.” And then last is one of our own choreographers, Loughlan [Prior]. He’ll be doing a new “Firebird.” When I brought the idea of “Firebird” to him, I didn’t necessarily want it in the tradition of the Russian story. It’s about reincarnation, it’s about the future, almost about Mother Nature—and here in New Zealand, it does look like we have risen from the water and that the sky is within reach of our fingertips. I wanted him to explore that, and he’s gone off and come back with the most fantastic ideas and I can’t wait for him to get in the studio and actually start the rehearsal process.

I read that you had visited New Zealand only once before accepting the role of Artistic Director. Is that true?

Yes, it is. I had been dancing in Melbourne, and after we finished, Michael and I had been in Melbourne for about two weeks, and we had a day spare, so, we thought we’ve seen Melbourne, why not? We were in New Zealand for about 72 hours. It was extraordinary.

Next
Fair, Kind, and True