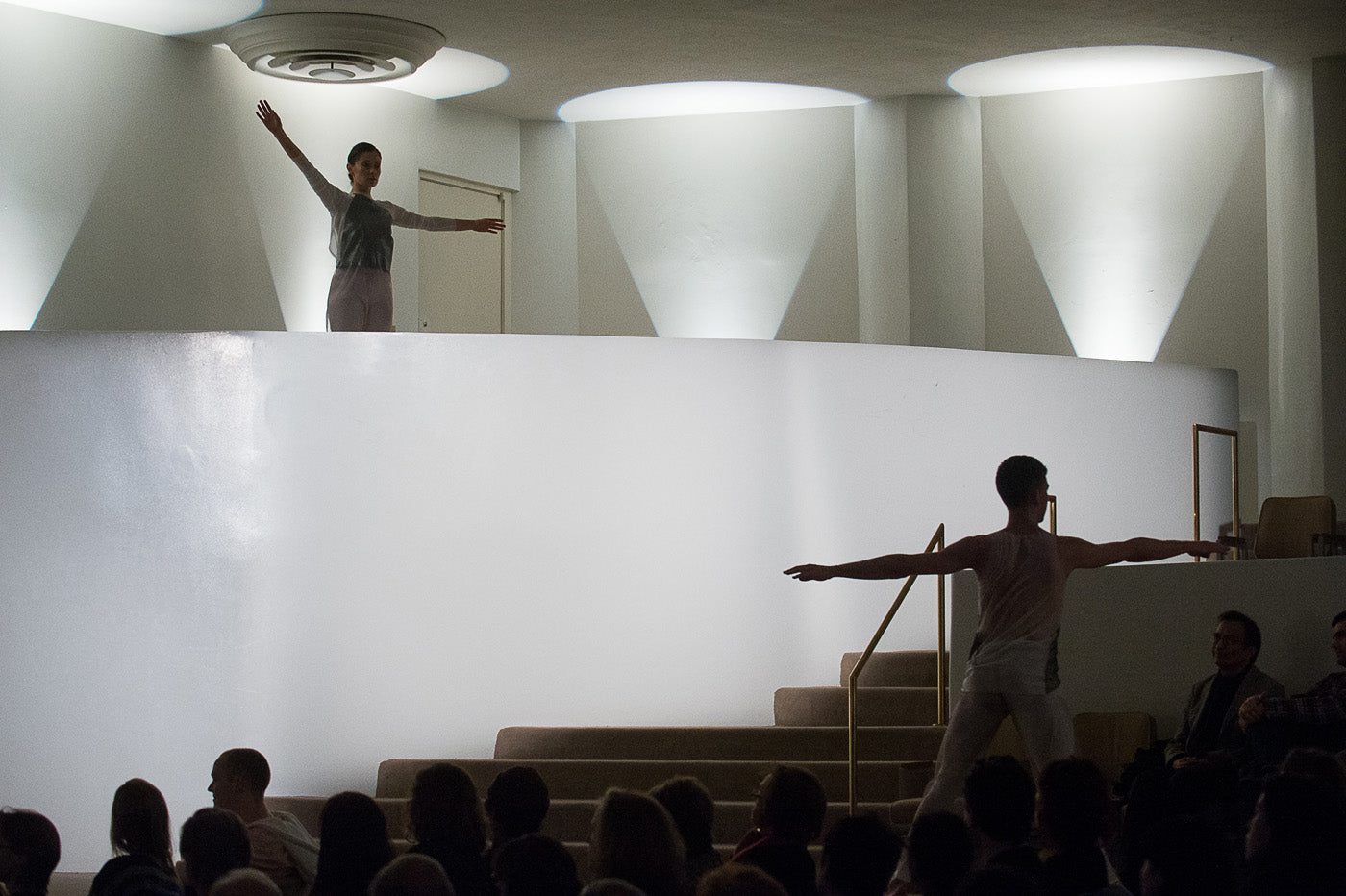 The Boy Should Always Meet the Girl

Pam Tanowitz's “Broken Story (wherein there is no ecstasy)”

Pam Tanowitz is a choreographer of conflicted interests. “When I talk about narrative and non-narrative, I feel like I want it both ways,” she said in an interview with the Joyce Theater in 2013. She cites George Balanchine and Merce Cunningham as her two greatest influences, artists whose methods and techniques lie at opposite poles of virtually every spectrum. She comes from a background in contemporary (and mostly Cunningham) style, but says that she enjoys working in ballet. This interest has sometimes gone awry. In 2012 she presented the stuffy “Untitled (Blue Ballet)” at the Kitchen, with a cast drawn from American Ballet Theatre. She publicly acknowledged that the work was a failure, and went back to the drawing board with bare feet and less rules. “I’m trying to make the issues I[‘ve] had worth it,” she said.

“Broken Story (wherein there is no ecstasy)” is her fifth work produced by the Guggenheim’s Works and Process Series, and her familiarity with the theater is displayed to great effect. Dancers come and go through all available doors, including the ones above the stage and behind the audience. They use the walls and handrails as barres, and travel along the semicircle path among the seats of the auditorium. If the powers that be had allowed it, I’m sure they would climb on top of the audience members, too.

Perhaps more important to Tanowitz’s work was the not the space the commission allowed her, but the length of time. I could list the name of almost every step performed; everything falls in the classical ballet vocabulary. She’s managed to accomplish the difficult task of making all these movements slightly incongruous or out of character, and she does so in a way which is exceedingly charming. Working from the inside out of the form, she accentuates certain swings and rhythms in order to highlight a strangeness to which it is naturally predisposed. A standard glissade jump in “Broken Story” looks a little funny, almost like a word you’ve said aloud so many times that it starts making no sense at all. She’s taken the “issue” she had with ballet and made something genuinely innovative of it. Everything feels new, even if the language from which it derives is old.

In this sense the conflict has produced very interesting material. So it does too in the pull between narrative and abstraction. The dancers have great presence onstage, not in the usual way wherein you can intuit personalities via the dancing, but as people in and of themselves. I want to look wherever they are looking—often at each other—and understand the urgent impulse pressing them forward. Of the four dancers, two couples emerge: Dylan Crossman pairs with Maggie Cloud, Stuart Singer with Melissa Toogood (all are Cunningham trained, and great technicians). No one stays around for long; as soon as you think you’ve figured out the dynamic of the dance’s structure, one of them manages to creep off the stage. Tanowitz is clearly playing with expectations of the audience members, setting out the bait of conventional rapprochement only to subvert it.

Still, the looks exchanged, the hands held, and other points of contact—all this suggests a narrative. “It’s not so abstract…[there] are the spots that a viewer can get in,” Tanowitz has said of her choreography. This work was inspired by J.D. Salinger’s The Heart of A Broken Story, in which he describes why he can’t write the classic boy-meets-girl scenario. He tries to kill off the boy because at least that would make him a hero, but decides this would never happen in reality; it’s not the heart that’s broken, it’s the trope of the form. “I think that love is touch and yet not touch,” the boy hypothetically says to the girl in one of numerous imagined plot twists, but since Salinger “can’t alter the facts,” the boy doesn’t even have the chance to introduce himself properly.

There is a lot of touching and not touching in Tanowitz’s own “Broken Story,” yet this doesn’t leave an impression of love, thwarted or otherwise. The parters seem a little obsessed with their counterparts, but this obsession comes and goes. At the end of a tension-ridden duet, including a prolonged face-off in the orchestra pit, Toogood and Singer go their separate ways without so much as a backwards glance. Just a minute ago the two had been looking intently at each other, their backs against the wall, Toogood edging in so as to close the gap between them; apparently neither made a lasting enough impression. The undercutting of any kind of narrative fulfillment is amplified by the music, all commissioned works by four different composers (Hannah Lash, Caroline Shaw, David Lang, and Ted Hearne) played by the FLUX quartet. The violin, an instrument usually associated with the push and pull of lyrical emotions, becomes an almost antagonistic percussive element—a bit like the second movement of Ravel’s String Quartet in F Major but sans melodic harmony.

Salinger was writing a short story, and Tanowitz is choreographing markedly unpedestrian movement; neither of these mediums can be considered “realistic” in any sense of the word. Yet the internal logic of their compositions feels true. The boy should always meet the girl, of course, just as there should be that moment of release in which two dancers come together for the consummate pas de deux (the “ecstasy” Tanowitz might be alluding to in the title). But when either of these things happen they are duplicitous by default, belying the stilted ambiguities that make up much of life. The unalterable conclusion both artists come to—in terms of plot, in terms of form—feels so right that there’s a certain pleasure in watching them arrive there. This is the smartest (read: most enjoyable) performance of a contemporary piece I’ve seen in a long time.

So there’s no happy ending. There is, however, a clearly demarcated beginning, but it has to do with footwear rather than romantic serendipity. Before anyone else comes to the stage, Lindsey Jones dances alone, mixing aerobic class lunges into a series of jumps. She wears a pair of white jazz slippers in this “Prelude with shoes,” as it’s called. If the romance doesn’t work out then I suppose we must settle for a nice pair of kicks.

Previous
I Fly, I Fall

Next
No Rest for the Wilis