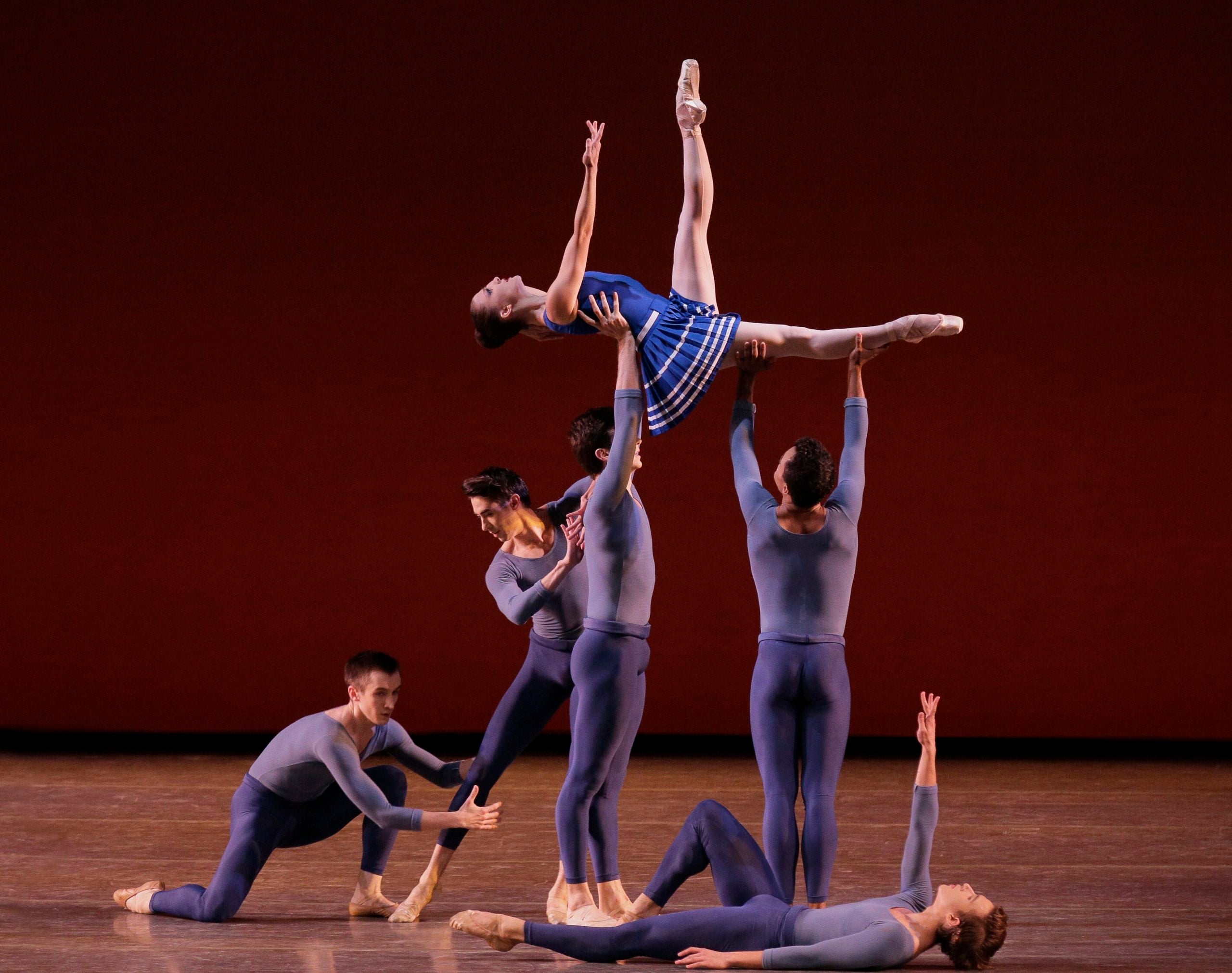 New York City Ballet’s Here/Now festival proved an epic undertaking. Over the course of four weeks, the company presented 43 ballets created by 22 choreographers, all works made during the past four decades—a celebration of contemporary choreography, unprecedented in its size, depth, scope, and richness.

Program 6 of the festival comprised an appealing collection of works choreographed in the 21st century, including Alexei Ratmansky’s masterful “Pictures at an Exhibition” and Justin Peck’s spirited “Year of the Rabbit.”

Ratmansky’s “Pictures” had its premiere in 2014. With each viewing, the ballet’s visual and emotional appeal grows only more captivating, with the choreography unearthing a myriad of new intricate details and dramatic nuances. Set to the 1874 piano score of the same title by the Russian composer, Modest Mussorgsky, this piece for a ten-member ensemble is a brilliant evocation of art and music in dance, irresistibly vibrant, imaginative, and warmhearted.

An explosion of invigorating sound, Mussorgsky’s composition was originally inspired by the exhibition of paintings and drawings; its colorful and animated sonorities evoke cascading images of character and emotion. The music feels unmistakably Russian in its use of folkloric themes, rhythmical patterns, and melodic textures. In response to the score’s ever-changing nature, Ratmansky created a unique experience of abstract movement, conjuring a fascinating world—part fairytale, part reality—that feels at once theatrical and deeply personal, unexpected and utterly sincere.

The ballet’s superlative designs by Wendall K. Harrington wonderfully complement the action onstage: the backdrop performs its own witty and invigorating dance, with vivid colors and shapes of Kandinsky’s painting Color Study: Squares with Concentric Circles assembling and disassembling before our eyes.

The superb cast was a mix of the dancers who originated the roles in this work and new-comers, all performing with precise comic and musical timing, amusing playfulness, and joyous abandon. The phenomenal Sara Mearns reprised her original role, dancing with sparkling vigor in “The Gnome,” her sharply angular and twitching movements mirroring the sneaky grotesquery and wildness of the music. She was a mischievous leader of the all-female quartet, complete with Sterling Hyltin, Claire Kretzschmar and Abi Stafford, in the cartoonish “Bydlo,” their humorous prancing ended with them holding hands, like little kids, while sneakily tiptoeing, in a feat of exaggerated fear, into the wings. Mearns was all energy and unstoppable force in her rambunctious duet with Andrew Veyette in “Baba Yaga,” the pounding and prickly music commemorating that cunning and gruff goddess of Russian folklore. The excellent Veyette was energetic and confident in the role made on Amar Ramasar, dancing with loose-limbed freedom and implacable zest.

Sterling Hyltin and Tyler Angle melted in each other’s embraces in their sculptural and dreamy duet in “The Old Castle,” bringing to the fore the serene tranquility and majestic air of the music and the choreography. The effervescent Tiler Peck brought sparkling fervor and charming poise, demonstrating her immaculate footwork in her exhilarating solo in “Tuileries;” whereas she turned into a mysteriously alluring creature, all captivating clarity and élan, in “The Market at Limoges,” gliding onstage with Gonzalo Garcia.

The male contingent of the cast imbued their good-humored number in “Ballet of the Unhatched Chicks” with physical exuberance and bright energy; and the triumphant finale “The Great Gate of Kiev” felt particularly heroic, inspiring, and life-affirming.

With nearly 30 ballets under his belt and commissions from such powerhouses as Paris Opera Ballet, San Francisco Ballet, and Miami City Ballet, NYCB’s resident choreographer Justin Peck is a widely-recognized name in the world of dance. Yet five years ago, aged 25 and still a member of the corps de ballet, Peck was only embarking on his choreographic career. Premiered in 2012, “Year of the Rabbit” was Peck’s second ballet for NYCB. It’s a large ensemble piece, with a cast of 18 dancers, accompanied by the music of singer and songwriter Sufjan Stevens, namely his astrology-referencing song cycle titled “Enjoy Your Rabbit.”

Peck’s “Rabbit” is a delightful, giddy work that vividly demonstrates the choreographer’s unique strengths and gifts, including his keen sense of architectural design in time and space. His groupings are particularly memorable: original, multilayered, and eye-catching in their form, flow, and changeability. Watching this dance, you can’t help but admire the ways he fuses complex formal patterns and elegant classical style, simultaneously sprucing them with youthful energy and everyday spirit. The way he juxtaposes ensembles and soloists is especially striking. From the start, the choreography bubbles and fizzes, capturing in a kaleidoscopic series of surging formations the inexorable drive of the music and the pulse of our time.

Dressed in attractive nautical-themed costumes (Peck is also credited as designer of the ballet’s attire), the dancers happily reveled in the choreography’s ingenious playfulness, throwing themselves into an exhilarating rush of movement, forming and dissolving onstage one breathtaking pattern after another—all unstoppable, pulsating motion. Among the leading dancers, Ashley Bouder stood out for her dazzling jump and fantastic footwork; and the enchanting Teresa Reichlen and Jared Angle claimed a few moments of contemplative tranquility, communicating their dialogue with beautiful lyrical feeling and elegance.

The program opened with three short pieces: Christopher Wheeldon’s “Carousel (A Dance),” Robert Binet’s “The Blue of Distance,” and Peter Martins’s “The Infernal Machine,” all similar in their brevity but varied in their atmosphere, musical accompaniment, and stylistic idiom.

Wheeldon’s “Carousel,” from 2002, with its ingenious “merry-go-round” ensemble choreography and a mystifying romantic pas de deux for the leading couple, is sheer entertainment. The atmosphere of carnival permeates the ballet, which is set to the music by Richard Rodgers from the 1945 musical of the same title. Lauren Lovette, in summery yellow, was the piece’s quietly shy heroine. The handsome Chase Finlay was the hero, vying for her heart and affection. In her role, Lovette was fittingly reticent and perceptive; Finlay, sporting a red scarf around his neck, came across as indomitable and somewhat narcissistic. Theirs was a complicated relationship—an elusive encounter of two strangers devoid of emotional certainty and clear resolution.

Created in 2015, Binet’s “The Blue of Distance,” a handsomely crafted septet to the music of Maurice Ravel, was the Canadian choreographer’s first commission for NYCB. It’s a sumptuously outfitted ballet: the white-and-blue tutu designs with Swarovski’s crystals are particularly effective. The piece offers a delicate interplay of stillness and motion and has an impressionistic feel to it as if to reflect the soothing shimmer of Ravel’s score. The entire cast was diligently responsive to the choreography and the music, dancing with admirable technical skill and nuance, with memorable turns by Unity Phelan, Harrison Ball, and Preston Chamblee.

Peter Martins’s “The Infernal Machine” is a stark, highly-acrobatic duet accompanied by the loud and astringent music by Christopher Rouse. The best—and the most unexpected—part of the performance was to see the outstanding Craig Hall back on the stage. I always admired the impeccable artistry and generous partnering skills of this dancer, who retired from his performing career in 2016 and now is the company’s ballet master. Thanks to his capable and secure hands, Ashley Laracey looked relaxed and composed as she bravely navigated through a series of treacherous hurdles of Martins’s aggressive, combat-like choreography.

With so many choices of music and choreography, and with so much talent on display, this selection of the festival offered something for every taste. It was a long but ultimately enjoyable and rewarding program.

Next
Decadence and Desire