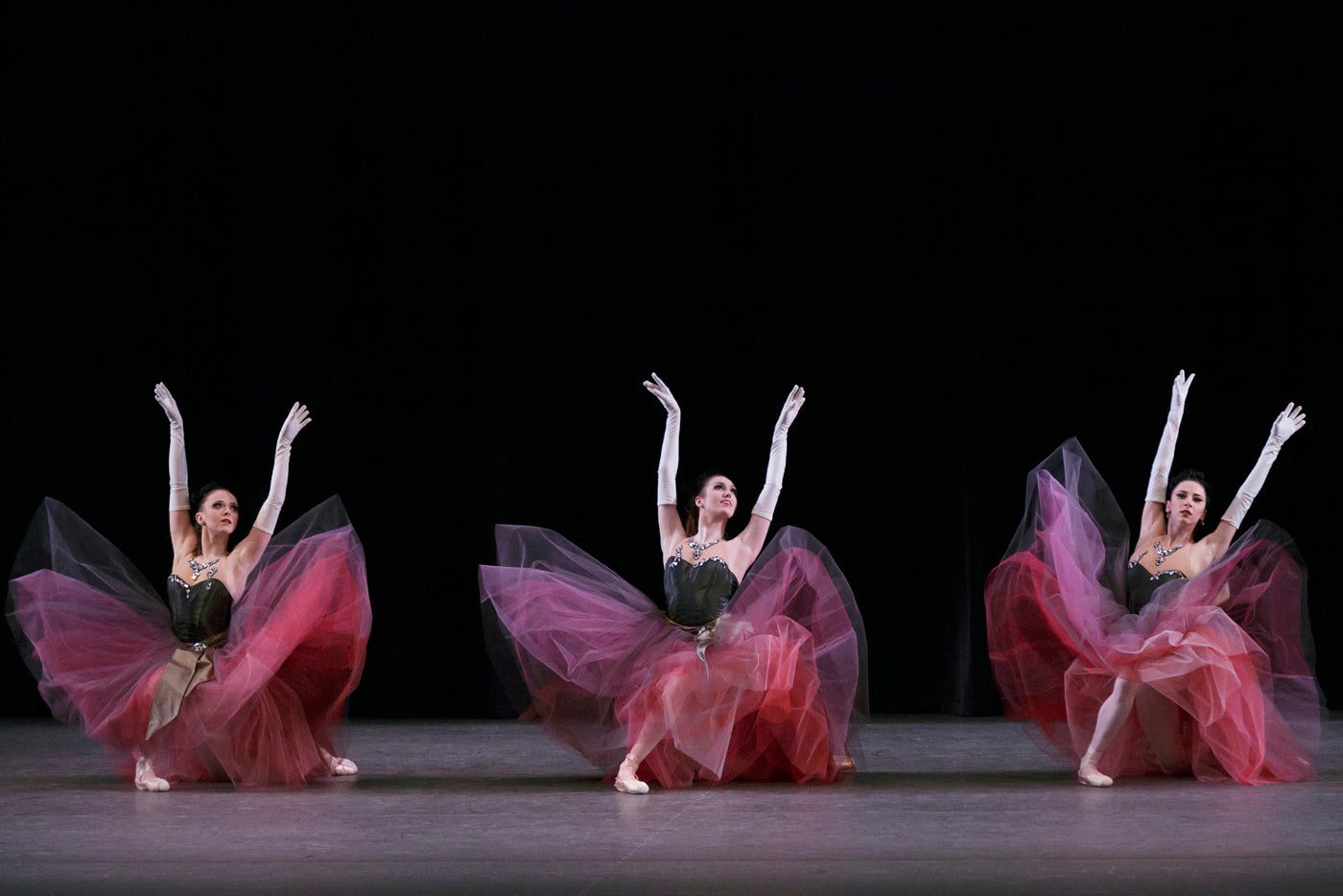 On Saturday, January 24, New York City Ballet celebrated in style the 111th anniversary of company co-founder and choreographer George Balanchine, who was born on January 22, 1904. This was NYCB’s fifth annual birthday celebration for Mr. Balanchine, dubbed “Saturday at the Ballet with George,” and the festivities featured two all-Balanchine programs (2 p.m. and 8 p.m.) as well as other events, including live music performances by members of the NYCB orchestra and movement workshops for adults and children.

The sunny “Donizetti Variations” made for a perfect curtain-opener. This cheerful suite of dances for a principal couple and a small corps de ballet has an intimate feel and a big, happy heart. Choreographed in 1960 to music from Gaetano Donizetti’s opera “Don Sebastian,” “Donizetti Variations” abounds with sparkling energy and virtuosic steps; it’s a delightful evocation of the ballets of 19th century Danish choreographer August Bournonville, accompanied by tuneful, lilting music.

The ballet’s opening belongs to the ensemble. The dancers enter the stage in three trios (two women and a man) and instantly draw the audience into the irresistible architecture of Balanchine choreography. Dressed in festive, peasant-like attire, the cast looked like a merry group of villagers, as they skimmed across the stage with vigor and glee; their steps reflecting the brisk tempo and effervescent charm of the score.

Yet the ballet’s centerpiece is its leading ballerina; and Ashley Bouder was her dynamic, irresistible self, zooming through Balanchine’s vigorous steps with marvelous attack, speed and flair. This is the role she was born to dance, for it perfectly matches her high-energy virtuosity and lively disposition.

Bouder is a prodigious allegro dancer, with fast and precise footwork and the ability to soar in the air with astonishing ease. Aptly partnered by Joaquin de Luz, she danced her part with comet-like velocity, holding the audience in a state of excitement and awe as she whizzed across the stage in a series of whirling turns and pirouettes. But it was her trademark sideways jumps, which she performed with her spectacular gravity-defying gift and go-for-broke attitude that are most memorable. Her lack of inhibition was thrilling, her exuberance and enthusiasm infectious. The buoyant De Luz performed with fine stylistic authority, nicely balancing the effortless bravura and informal grace his role demanded.

The dance-drama “La Valse,” choreographed in 1951 to sweeping waltzes of Maurice Ravel, changed the atmosphere in the theater to that of a ghost story.

Watching the NYCB dancers riding the turbulent crescendos of Ravel’s music, it’s hard to believe that Sergei Diaghilev, the Russian impresario and a visionary of unparalleled artistic intuition, rejected La Valse, which he commissioned from the composer as ballet music for his company, Ballets Russes, because he considered it insufficiently theatrical. In Balanchine’s masterly hands, Ravel’s score came to life as dramatic theater of the highest order.

The ballet feels like one sweeping, all-consuming waltz which slowly but steadily builds its mystery, intensity and emotional power, all leading to a devastating finale. Its narrative line is simple: a young girl attends a fabulous ball where she charms a mysterious stranger whose attraction proves fatal—he invites her for a waltz and then claims her life.

The ballet consists of two distinctive acts. The first is set to Ravel’s Valses Nobles et Sentimentales and serves as an ominous prelude to the tragic events to come. As the curtain rises, three ballerinas (Marika Anderson, Gretchen Smith, and Lydia Wellington), clad in sumptuous gowns of deep red, suggest fortune tellers of sorts, or fates, their hand gestures cursive and purposely mannered. Their mystical dance-ritual establishes the ballet’s sinister mood, which is deepened further by a quick succession of haunting waltzes. (Georgina Pazcoguin and Sean Suozzi were particularly effective in their emotionally-charged whirl.) Here the choreography is richly elaborate in its use of space and patterns and perfectly echoes the tumultuous rhythms and dramatic tension of the music. The second part is danced to La Valse itself, and contains the dramatic core of the entire ballet.

Looking pure and innocently shy, Sterling Hyltin, as the ballet’s doomed heroine (or Girl in White) stepped onto the stage, fascinated and overwhelmed by the grand ballroom and its glamorous guests. Her young and handsome companion (danced with sophistication and gracious manners by Jared Angle) paid her loving attention and she seemed to be more relaxed and calm in the intimidating surroundings she found herself—that is, until Death (Amar Ramasar) made an entrance, offering her jewelry and dressing her in all-black translucent attire, complete with a pair of long sheer gloves.

As Death, the dark and towering Ramasar was magnificent in his role, looking both irresistibly attractive and increasingly menacing. When he held a mirror in front of the girl’s face she pushed his hand away, terrified and visibly shaken, as if foreseeing her imminent tragic fate. Their final, agonizing dance was heart-wrenching in its demonic energy. Ramasar gave his role a contemporary edge, playing his anti-hero as a vampire, who abandoned his victim splaying on the floor, paper-white and breathless, as though there was no blood left in her expired body.

The NYCB orchestra, led by Daniel Capps, delivered a stirring rendition of Ravel’s music, bringing into a sharp focus its incessant pulse and a sense of gloom and riotous hysteria.

The contrasting duality of this piece will never cease to astonish me. With its lyrical and melancholic music, the opening section is a vision of heaven. The corps ballerinas in long, flowing dresses, their hair unbound and falling down their backs, glide onstage in a languorous, graceful fashion (the main movement leitmotif here is a dreamy walk) as if luxuriating in some otherworldly realm conjured by music and movement. Then the lights brighten and the music changes its mood from elegiac to festive and the audience travels back to earth, to the world of courtly elegance and splendor. In this part of the ballet, the female ensemble is outfitted in bejeweled white tunics and escorted by their noble cavaliers. The difference between the “heaven” and “earth” acts is so striking that I always think about this piece as two separate ballets being danced back-to-back.

The leading couple, however, is a common link that ties these two pieces together; and Maria Kowroski and Tyler Angle delivered a note-perfect performance which made this “Chaconne” all the more memorable.

Tall, leggy and lithe, the 39-year-old Kowroski is the most senior principal ballerina in the company’s roster, and its shining star. Her physique and technical prowess, as well as the driving impetus of her dancing, make her an ideal Balanchine ballerina. In addition, she is a thoughtful and intelligent interpreter of her roles, blessed with an innate sense of musicality and timing.

In the first act’s pas de deux, performed to the familiar, flute-singing Dance of the Blessed Spirits, Kowroski drifted onstage as if weightlessly afloat, immersing herself completely in that special serenity of the moment. Together with Angle, the two moved with luminous clarity and calm as though guided by their emotional bond and trust.

Their duet in the second section was a totally different affair—a mesmerizing study in the formality and brilliance of classical ballet. Angle was marvelous in his virtuosic display, executing his quicksilver beating jumps and rapid spacious leaps with effortless accuracy and style. Kowroski’s performance was as immaculate as it was exciting: she fully abandoned herself to the playful intricacies of the music, inviting the audience into her world of wonder and delight.

Megan Johnson and Lydia Wellington were admirable in their soloist roles. In the ballet’s stately finale, the entire cast was in a top-notch form, bringing “Chaconne,” and the afternoon, to its uplifting, radiant conclusion.

Next
The Superfluous Man