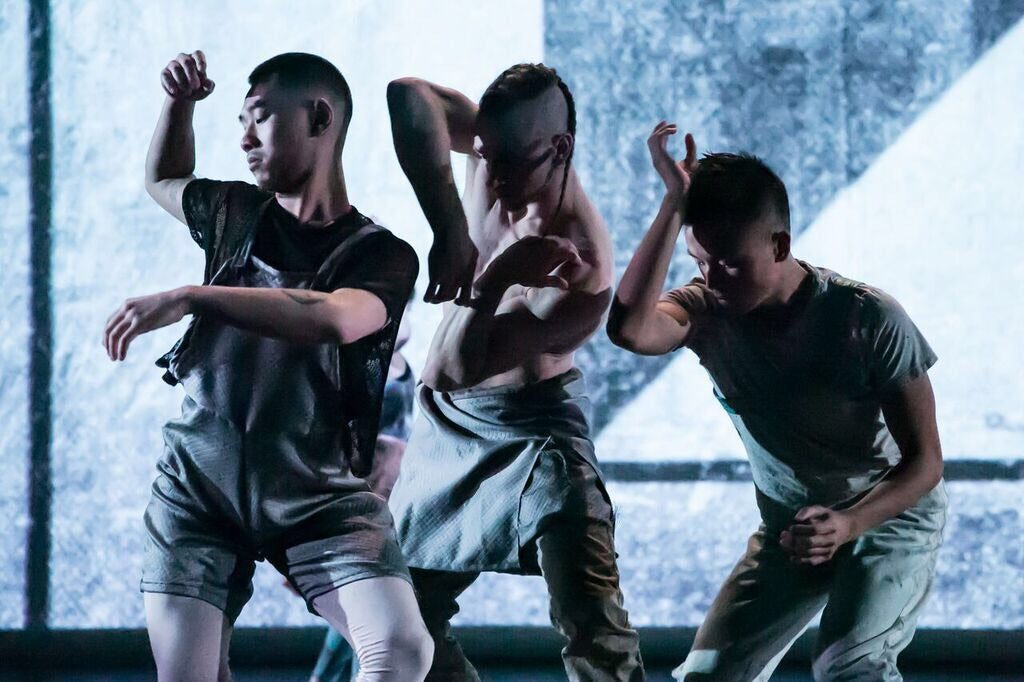 Kylie Thompson Dance: A film and a performance

“Project 7,” choreographer and director Kylie Thompson revealed, was the working title of her new piece, named for the seven dancers of her eponymous pick-up company. On the meaning of the ultimate title, “33/33,” she was less forthcoming, hinting only at numerology as a driving theme. In the post-performance chat, lighting and projection designer, Simon Clemo reminded us: “Everything you need to know about the work is contained in the work,” his words and designs taking cues from the Russian avant-garde, and the Suprematism movement of 1930s.

With an express invitation to interpret at will, here are some of the thoughts that arose from the premiere of “33/33” at Toronto’s Winchester Street Theatre. As much as we try, we are never free of context, never as pure as the drifting geometric projections imply. In fact, for me, much of the indelible sweetness of “33/33” came from the deep sense of human connection the dancers displayed as they touched, tumbled, rebounded and flew away. In the Q&A session, with the dancers still catching their breath, we heard words like intimacy, trust, risk, and peer movement to describe the inner workings of the dance. Even sitting in a row to speak to us, the chain of connection was unbroken—an elbow touching a shoulder, fingers interlaced, a hand reaching around a back.

The Malevichian projected shapes were by contrast bold, angular and flat, which isn’t to suggest they didn’t chime with Thompson’s upbeat movement vocabulary of heavy-hip swivels, and shapes turning in themselves inside out, and sudden, cinematic reversals of flow. Dedra McDermott’s opening solo was especially eye-catching; generous, supple full-body movement snatched away by sharp full-stops, arresting every time. Thompson’s initial composition was particularly striking, too, with four women marking out the ordinates, with a trio of men, waving like reeds in the centrepoint.

Throughout, the adventurous choreography, blending hip hop and contemporary styles into a boneless meld, tugged us along after our seven as they negotiated the space in twos, threes and fours, seemingly caught up in an unnameable schema. The vaguely dystopic, cool, clothes (costuming by Ace Faulkner) helped derive an unfamiliar atmosphere, where nothing could be taken for granted.

Then, taking control, three of the dancers each shimmied a wire across the stage, attaching it taut just over head height. Gleaming a tropical pink and yellow where they cut the light, and adding literal tension, the wires remained for Sebastian “Bash” Hirtenstein’s brut solo, full of wild torso undulations and braided hair flicks. From there, the dance fell back on a familiar, if apt, improvised number game. Perhaps too literal a conclusion for the mystical unknowability of “33/33.”

Prefacing “33/33” was “Versus,” a filmed version of a pas de deux choreographed by Thompson originally staged at New Blue Emerging Dance. Alyssa Petrolo and David Norsworthy dressed in urban style with boots and toques, performed the duet in a wintery barn, the cold air dancing on their breath in atmospheric puffs. What the dance film evidenced for me, apart from the kind of secrecy or collusion intrinsic in Thompson’s pas de deux, was a kind of existentialism of dance itself. The play of the music (Stephanie Orlando) and swoop of the camera (Steve “Icy” Senga) was cool and abstract compared to the high stakes of “33/33,” even if it was all a numbers game.