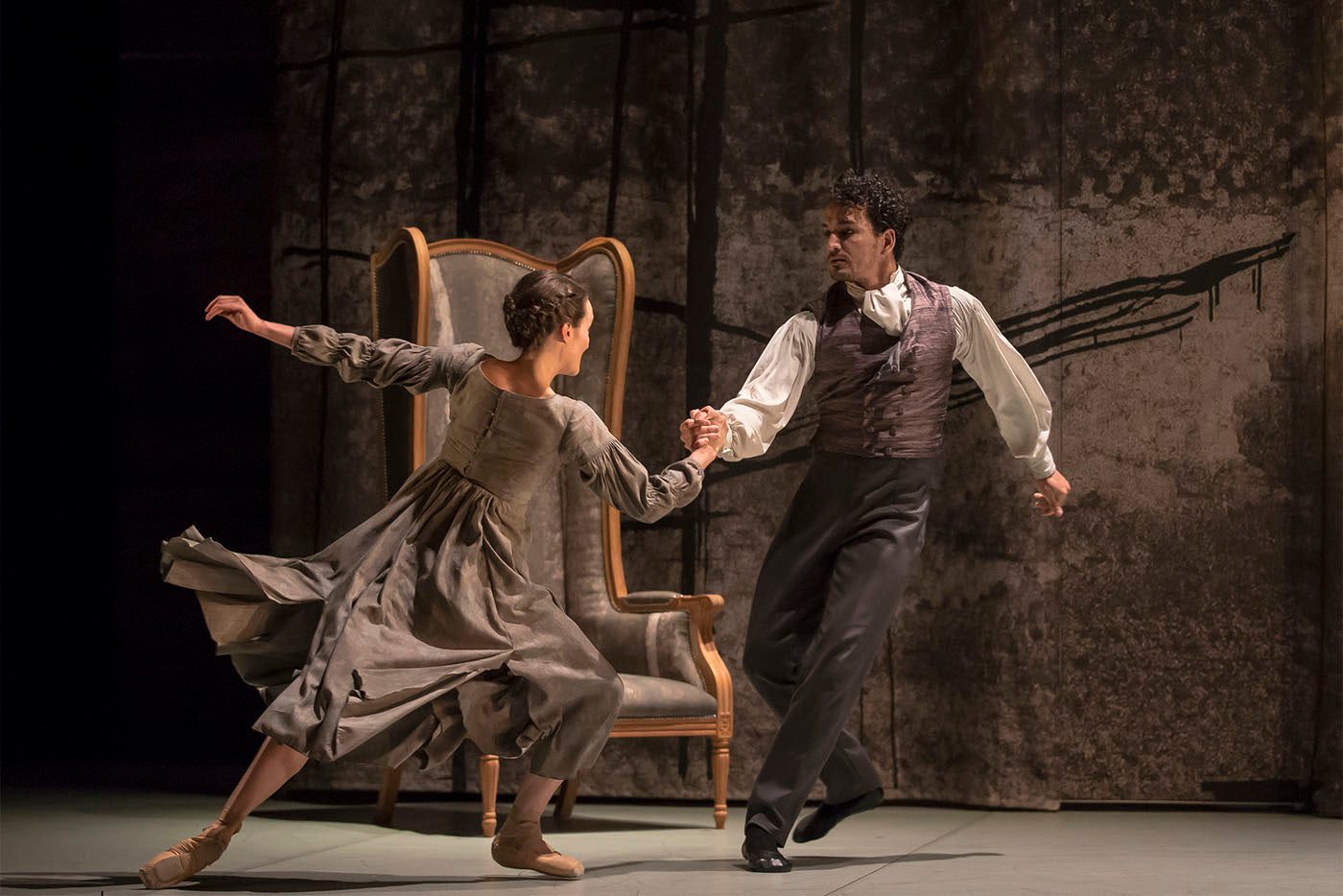 “I am not talking to you now through the medium of custom, conventionalities, nor even of mortal flesh: it is my spirit that addresses your spirit; just as if both had passed through the grave, and we stood at God’s feet, equal—as we are!”

The singing, searing prose of Charlotte Brontë’s masterpiece Jane Eyre makes a ripe springboard for dance. And yet the nineteenth-century novel has been curiously neglected on the ballet stage, despite the rich aesthetic potential of its plot, with its rugged setting and portentous twist. It’s a treat to see Northern Ballet step forward and tackle the work with their customary verve in this evening-length production, which premiered in 2016 and just received its London debut.

Director and choreographer Cathy Marston’s treatment presents a winding narrative that begins at the novel’s climax: Jane’s breakdown on the moor after discovering Rochester’s secret stowaway, Bertha. From here we rewind to the events preceding Jane’s tenure at Thornfield: her childhood abuse at the hands of relatives and harsh education at the monastic Lowood Institution. The mingling of timelines is hazy at times, complicated by the occasional intersection of young Jane and adult Jane (Antoinette Brooks-Daw and Dreda Blow, respectively), but the staging is overall apt, capturing the intensity of Jane’s coming of age.

One of the show’s biggest victories is whirring through the plot’s many swerves efficiently and with the (mostly) right degree of consideration. From the fastidious routines of reform school to the mysterious rhythms of Thornfield it flows, happily employing dance rather than mime to communicate Brontë’s text. There are a few meagre scenes and a few that feel long-winded—including a galumph in which Rochester (Javier Torres) recounts his recent horseback journey, saddle and whip in hand—but the production by and large stays on course, spurning traditional divertissements in favour of resourceful displays that steadily weave storytelling into the technique.

Underpinning the action is a baseline tension evoking Jane’s fraught private consciousness. Even in the show’s sunnier moments, there’s little relief—another ballet might have worked some superfluous frolicking into the second-act party scene, for example, but here it’s employed as a device to contrast Jane’s plainness with the glitz of Rochester’s fellow socialites. Likewise, there’s a distinct smoulder to Jane and Rochester’s duets, their romance furious and strained rather than whimsical.

Spurring on the tension is recurring imagery of Jane’s lifelong torture at the hands of men: male company members regularly descend on Blow, pushing and pulling her like a rag doll, summoning the brutality of Jane’s violent cousins and teachers. Even Rochester evinces a sense of entitlement to her person, cockily snatching her up and sliding her along in the early moments of their relationship. Jane’s resistance recalls one of her most famous lines: “I am no bird; and no net ensnares me.”

It’s a pleasure to watch Blow navigate the vigorous slides, pounces and jerks of Marston’s topsy-turvy choreography. She does a tremendous job balancing this demanding movement vocabulary with her character’s emotive complexity, which sees expressions of weariness and ferocity constantly jostle for position. Torres offers a delicious match, lusty, passionate and just the right touch of rude. Nowhere is this Byronic blend more enticing than when he’s perched in his high-backed chair, cocking his leg in an arch show of command.

Elsewhere, Brooks-Daw impresses, particularly in her short-lived kinship with Helen (Kiara Flavin), as does Victoria Sibson in her wild, gurning turn as the madwoman in the attic. Patrick Kinmonth’s set design provides a graceful backdrop, a swirl of swishing dresses, wavy brush-stroked scenery, and scrims that gesture at shadowy pasts and misty moors.

The ballet, like the novel, ends with the promising image of Jane and Rochester as a united front. In a lovely final touch, Blow alone steps into the spotlight, a reminder of Jane’s independence and enduring self-confidence. “I can live alone, if self-respect, and circumstances require me so to do. I need not sell my soul to buy bliss. I have an inward treasure born with me, which can keep me alive if all extraneous delights should be withheld, or offered only at a price I cannot afford to give.”