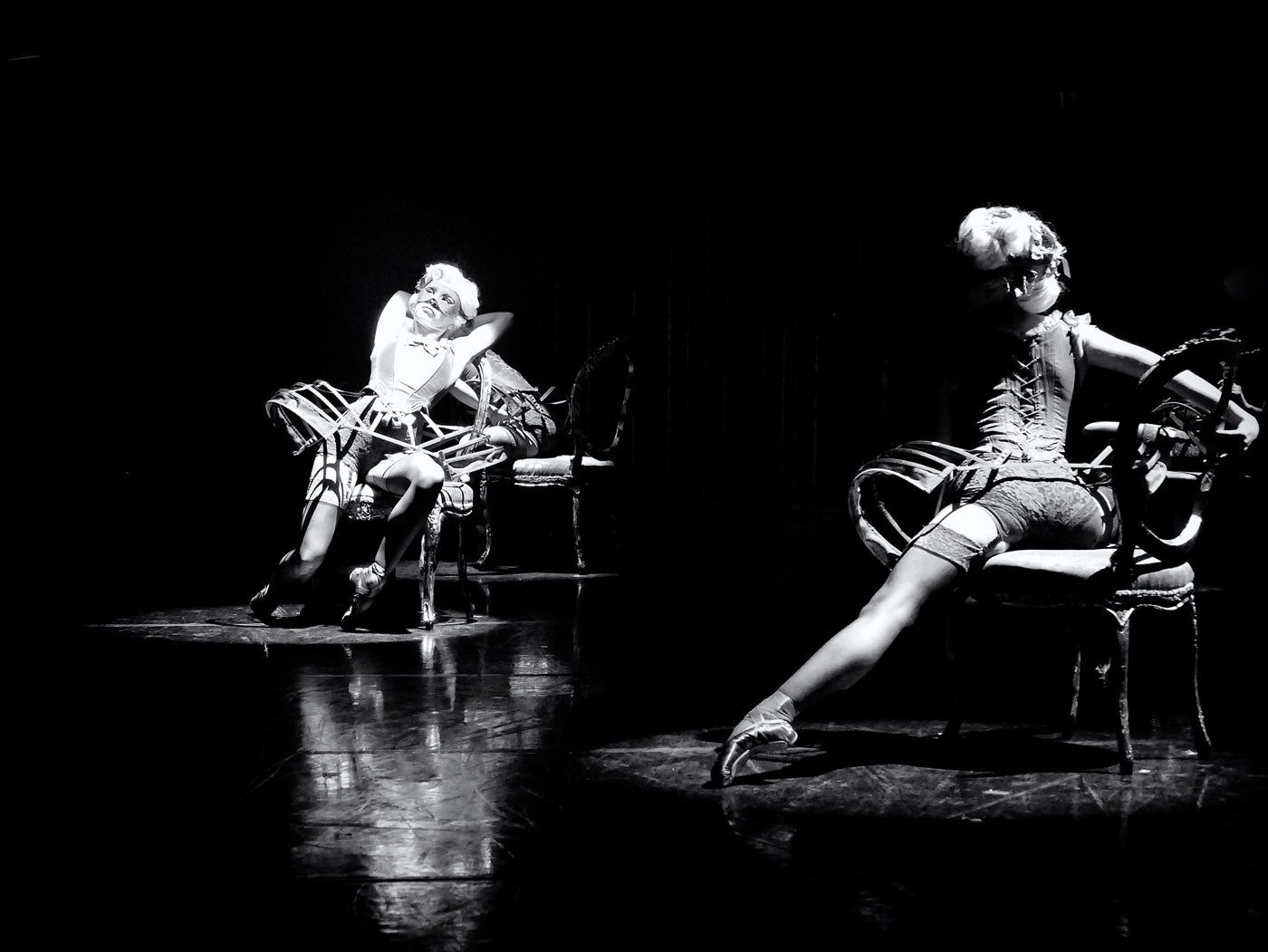 Cloaked, hooded figures process ceremoniously across the stage. They cross themselves before an unseen altar and disappear into the darkness between towering pillars. Dramatic, stately chimes enhance the pious atmosphere. Kneeling at their pews the company begin a sequence of precise and ordered movement, the angular isolations of their arms and upper body suggesting a ritual of prayer.

Yet this devout opening does not last long.

This is “Casanova,” and Kenneth Tindall’s new work for Leeds-based company Northern Ballet is a decadent period depiction that abounds with sex, indulged fantasises and mischievous liaisons.

With the descent of a single chandelier the scene shifts seamlessly from High Church to grand ballroom. The church pillars are now the opulent, gilded walls of a Venetian ballroom where the aspiring priest Casanova, forced out of the church after his seduction at the hands of two red-headed sisters, begins to reassess his calling.

Christopher Oram’s intelligent set design is one of the highlights of this work. It’s grand yet simple, the ideal backdrop for a story that shifts, often in a matter of moments, between the cool darkness of the church and the indulgent high-society of Venice and Paris.

The world of grandeur and excess that Casanova (danced by Giuliano Contadini) finds himself in is brought sumptuously to life in Act One’s masquerade ball. All black lace, masks and pseudo-leather touches, Oram’s costume designs (with wigs and make-up designed by Richard Mawbey) are part 50 Shades of Gray, part lavish eighteenth-century Venice. It’s the perfect complement to Tindall’s uplifting and stylish choreography; a ball-scene filled with swirling partnering and leg-wrapping lifts. Set to Kerry Muzzey’s filmic score, played here by the Northern Ballet Sinfonia, it’s a joyous opening scene. However, Tindall dwells upon this masquerade a little too long and, like the repeated movements of the accompanying strings—as beautiful as they are—it becomes somewhat repetitive.

In Tindall’s ballet, Casanova—employed as a musician at the ball—is then subjected to a robbery and rescued by the kindly Senator Bragadin who, attracted by Casanova, attempts to seduce him. Casnova in turn saves his life before the Church’s Inquisitors catch up with him. So follows imprisonment and an escape to Paris for a second act of new liaisons, another rich benefactor, gambling and scholarly pursuits—plus a brief-chance at love.

Yet to decipher all this from the ballet alone will prove a challenge. Tindall’s Casanova is so quickly seduced by the new world he finds himself in that there’s little time for any studied development of character or plot. There’s no strong storyline to follow and few recurring characters—when they do reappear you find yourself backtracking to discover where you left them last. As Casanova leaps from one liaison to another, and from one fortune to the next, the best remedy is to sit back and enjoy the spectacle.

The strength of this ballet lies in its stylised sets and costumes and Tindall’s fluid, expressive choreography. There are some striking images, such as the moment in Act Two where a line of suitors—both women and men—file past Casanova. He catches each and moves on to the next, a passing image of compromising positions that aptly captures one man’s heady list of sexual encounters.

Surprisingly, Casanova’s pursuit of pleasure brings him close to finding love. While the parallel lives of Bellino and Henriette (two different women who both dress as men and look deceptively similar) with whom Casanova has relations in the second act mainly adds to the plot confusion, the resulting duets are some of the strongest in the ballet. There’s a touching uncertainty to Casanova’s encounter with Bellino (Dreda Blow) that leads to some expressive partnering and soft, fluent choreography. Likewise, his duet with Henriette (Hannah Bateman) is both lyrical and impassioned, Contadini and Bateman managing to draw an effective emotional connection from their brief encounter.

It’s in these close, intimate interactions that Tindall’s choreography comes into its own and, equally, the company show their dramatic skill by creating believable characters in just a few short moments.

Throughout, Contadini makes a tender and likeable Casanova, a more nuanced and less heartless pleasure seeker than his acts would have you imagine. It’s quite touching that for all Casanova has encountered he cannot have the love he really desires. The whirlwind of pages in which this work ends, the characters that have littered Casanova’s colourful life circling around him, is an apt closing image for a full, but ephemeral, way of being.

From Venice to Paris, Tindall and the company of Northern Ballet have created an elegant world of decadence and desire, where the dark, looming presence of the high-church is never too far away. Yet even amidst these scenes of pleasure Tindall offers a glimpse into the lesser-known side of Casanova’s persona. From the opening, Casanova seems as charmed by books as he does by love and even in the freedom of Paris, where the cast’s silks and corsets come alive with colour, and the mirrored surfaces of the pillars bring to mind the palatial halls at Versailles (which is indeed, where Casanova finds himself) our protagonist begins to fall back upon intellectual pursuits. Here we are proffered a hint of the man Casanova may have been and not simply the pleasure-seeker of legend—even if he remains easily distracted. However, when the results of his distractions are filled with as much life as Northern Ballet bring to the stage, these sins of the flesh are happily forgiven.