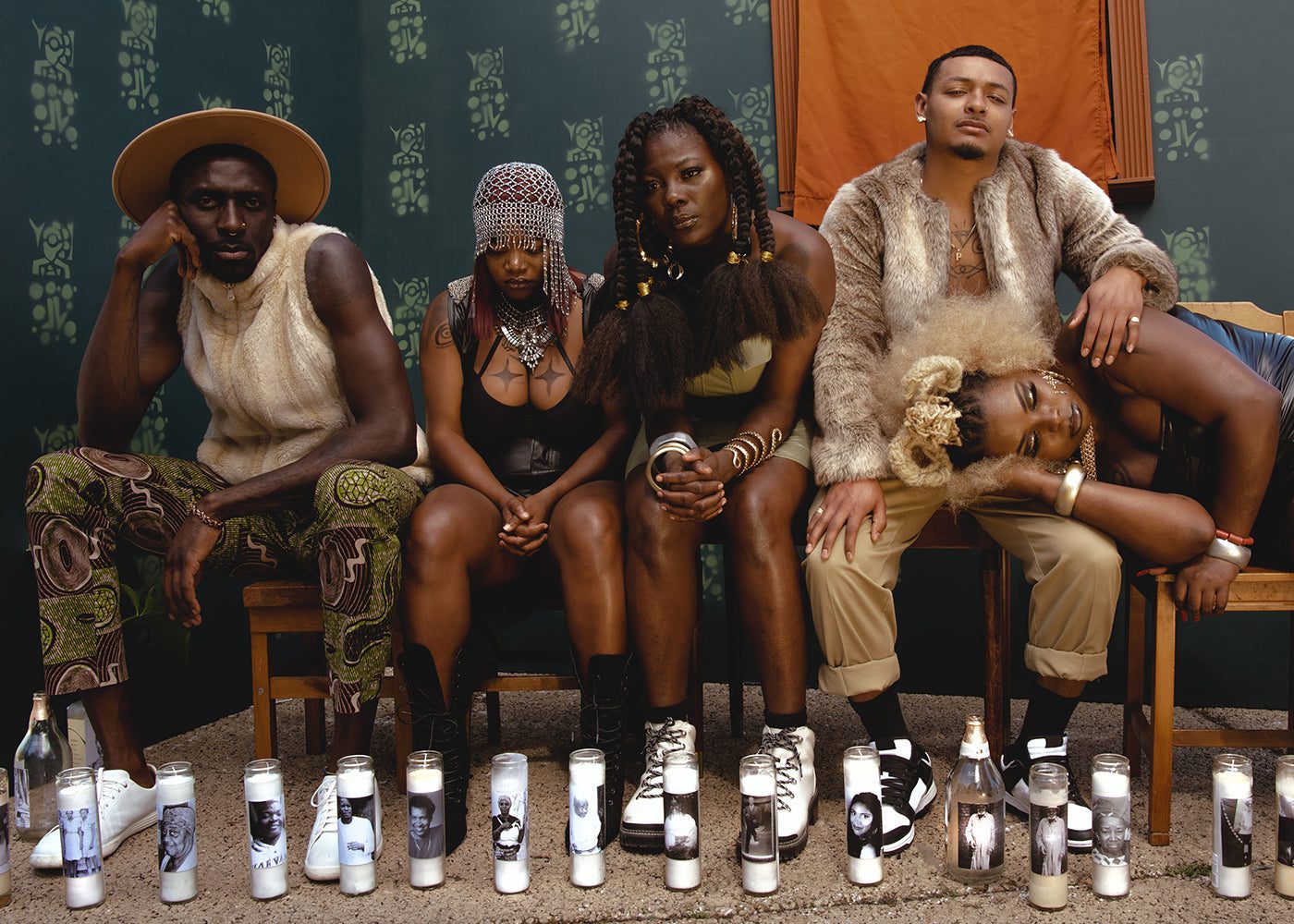 In the chaotic, dirty heart of San Francisco’s Tenderloin neighborhood, in a fuchsia building that once housed a porn palace, stands a venue named CounterPulse. I’m always curious what’s going on at CounterPulse because the place seems to welcome subversion with an edge of sexiness, because it prioritizes racial equity in a way that goes way beyond lip service, and because you never know when you’re going to discover something mind-blowing there. That all proved true again in early June, when I was lured to the culminating performances of CounterPulse’s ARC Edge residency by Audrey Johnson, a beguiling dancer in Gerald Casel’s company whose premiere, “[and then we must be],” turned out to be lovely but not revelatory. Then I came back from intermission for an artist I’d never heard of but clearly should have: Nkeiruka Oruche. Her company, Gbedu Town Radio, proceeded to blow the roof off the place.

The experience began in the lobby, where an altar with candles bearing photos of Black ancestors stood behind a bench. A man who appeared seven feet tall roamed silently among theater-goers, wearing all white with a black mask over his face and a huge hat with a long fringe of dried grasses. As we moved from the lobby back into the black-box performance space, we found it transformed. Black cloths bearing indigenous African paintings in white and red covered every inch of wall. An anticipatory drone rumbled from the sound system. Three rows of performers standing with powerful posture stared (well, except the children among the performers, whose eyes sweetly lit up when they spotted friends in the crowd). They seemed to be waiting for us to buckle our seat belts. Then a scream pealed, a woman fell to the floor, and the other performers wept and howled. The ride had begun.

“Mixtape of the Dead and Gone #1” tells a simple story. The dead woman, named Ahamefula, is met by the tall Shaman-like figure from the lobby, named ASA-#7. He informs Ahamefula that she’s bit the dust and has to decide whether to become an ancestor to those she’s left behind; Ahamefula fights this with everything she’s got, shouting “Do you know who I am?” and protesting that she’s important—her son won a degree from Oxford University. She tries to bargain for more time. Finally, after a journey through several thrilling group dances, some of them influenced primarily by African dance, others leaning towards contemporary hip-hop idioms, Ahamefula accepts her new role as an ancestor, and she and her spirit guide share a spliff and shoot the shit.

You could credit the two commanding lead performers for much of the magic: As Ahamefula, saucy Uzo Nwankpa is sheer force of personality, while Moses Omolade, as ASA-#7, seems a little greener to the stage but slides around the action with just the right winking cool. You could also point to the fabulous dancers among the seven-member adult ensemble—their energy, full-body articulation, and unbounded musicality is top-rate, led especially by Richmond-raised Ebonie Barnett. But the brilliance of Oruche as creator, writer, and director of this odyssey (not to mention choreographer, along with contributions from Barnett and others)—this needs to be fully celebrated.

“Mixtape of the Dead and Gone #1” crackles with the energy of a hundred or more ingenious theatrical touches. Live drummers and a DJ sit stage left, interacting with the performance and interjecting DJ jokes from contemporary culture. (When ASA-#7 says “I’m a big boy now,” a dollop of Biggie Smalls’ “Big Papa” plays, and the crowd cracks up.) The script is also fresh in its fluid movement between the story’s Pan-African setting and of-the-moment references—“Is this you sliding into Dre’s DMs?” ASA-#7 asks as he proves to Ahamefula that oh yes, he does know exactly who she is, with enough intimate detail to make her cringe. Every five seconds, it seems, Oruche’s playfulness gives the audience a reason for pleasure. But there is seriousness to this journey, too. Ahamefula is a complex character, and her resistance and then embrace of becoming an ancestor speaks to profound themes without reductive moralizing.

So, since I am late to discovering Nkeiruku Oruche, let me pass on what I’ve been able to learn. She is a descendant of the Igbo, an ancient people originating in Southeastern Nigeria; she has previously co-produced a Bay Area-based Afro-Urban festival, Bakanal de Afrique, involving more than 60 Bay Area artists and 45 national and international artists; she has already been recognized as a Yerba Buena Center for the Arts 100 honoree, and has received significant grants from the National Dance Project, the Creative Work Fund, and many others. She is the founder of the nonprofit Afro Urban Society, of which she writes: “In an ideal world, we don’t need to exist. Until then, we envision community-powered societies where Black folks live, breathe, and create without permission.”

I write this with humility as a white viewer offering impressions of a Black performance. One of the important questions I’ve been listening to over some years now is “How can Black artists in the U.S. make art that is not for the white gaze?” Oruche asks other important questions in her program notes: “How do we hold pain, grief & joy for ourselves and as a community? How do we define & self-determine our liberatory practices? And how do we remember who we are in societies designed to make us forget?”

Oruche doesn’t need my evaluation. Her art was made for a perspective beyond mine, though it thrills my gaze, too. For what it’s worth (and I’m fine if the worth is not much), I think “Mixtape of the Dead” offers one hell of a powerful answer to all her queries.