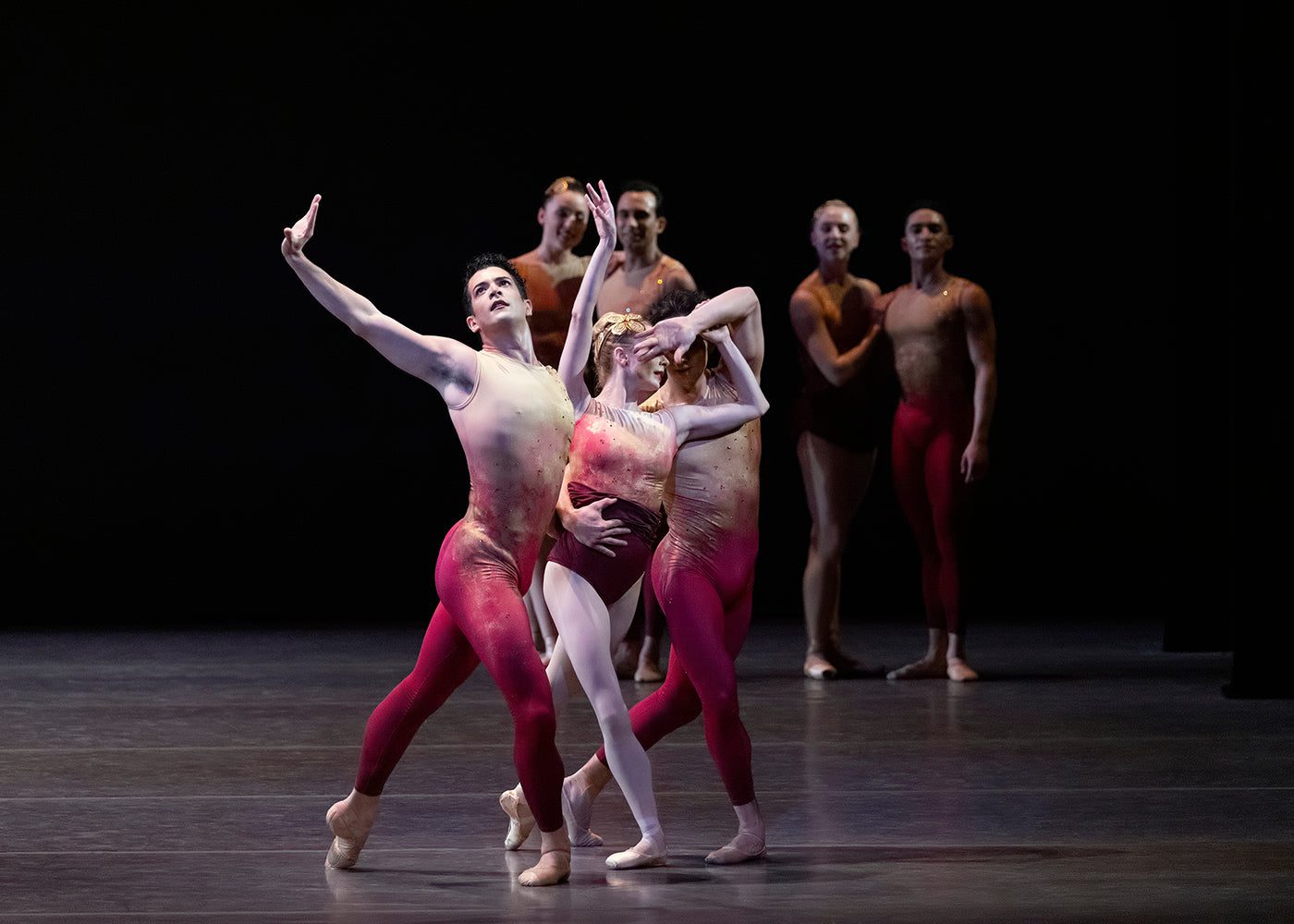 The 1972 Stravinsky Festival at New York City Ballet is one of those mythical moments people speak of with glowing tones of wonderment: 30 ballets! 20 premieres! New works by Balanchine, Robbins, John Taras, Todd Bolender, and more! Not to mention the fact that it was the occasion of the creation of two the greatest Stravinsky ballets ever made: “Symphony in Three Movements” and “Stravinsky Violin Concerto.”

Nothing can hold a candle to that level of creativity and excitement, and one can be forgiven for finding that there is a slightly warmed-over feeling about this year’s tribute to the event, packaged as a two-week Stravinsky festival. (This week and next.) Most of the ballets, which are almost all by Balanchine or Robbins, are already in regular circulation. The only rarities are “Scherzo à la Russe,” a pretty, faux-folk dance for a cast of young women in tunics and Russian crowns, and “Divertimento from ‘Baiser de la Fée.’”

Nevertheless, the lineup includes many great works, including “Symphony in Three” and the “Violin Concerto,” both of which are being performed this week. There are also two recent ballets by Justin Peck set to Stravinsky (“Scherzo Fantastique” and “Pulcinella Variations”) and the requisite new work. The latter was unveiled at the company’s Spring Gala on May 5. With the title “Architects of Time,” it is a ballet by the recently-retired City Ballet dancer Silas Farley, who, at 28, is now the dean of the dance institute of the Colburn School in Los Angeles.

The ballet has a delightful lineage: It is set to a series of variations by the composer David K. Israel, which are in turn inspired by a George Balanchine’s musical setting of an acrostic poem he wrote as a birthday present for his friend Igor Stravinsky in 1946. Balanchine’s simple tune was first amplified by Stravinsky into a more elaborate musical work, a copy of which Israel discovered in the Harvard Theater Collection and spun into eight very Stravinskyan variations on a theme. Farley has turned them into a ballet for a large ensemble, out of which emerge solos, duos, and trios. The title refers to a Balanchine beau mot: “Composer is architect of time,” said the choreographer, “and we have to dance to it.”

Farley’s ballet, and its accompanying score, are thus filled with multiple allusions. The score reflects the dancyness and rhythmic propulsion that are typical of much of Stravinsky, with syncopations and frequent variations in meter. Like Stravinsky, too, it favors clarity and the featuring of single instruments—there is a section dominated by high strings, another by the flute, or the trumpet. But Israel’s language tends to be a little bit richer, friendlier, less spiky, than Stravinsky’s, and towards the end, veers slightly toward sentimentality.

Farley has combined this structure with an intimate knowledge of the company, and of its style. “Architects of Time” is fluid and fluent, with an elegant sense of space and the way bodies travel through it. Often the dancers are part of a fluidly-moving maelstrom, from which they peel away, alone or in smaller groups. It is not unusual to see several clusters of activity at once. Dancers enter and leave the fray with fluidity and ease. Farley shows confidence in his handling of structure; you immediately feel you are in good hands.

Out of this maelstrom emerge individual dancers, with clear personalities. Jovani Furlan is stretchy, curious, pensive, and warm. India Bradley and Kennard Henson are witty, light, fast. Roman Mejía is irrepressible, a creature of the air, but also a dancer with a strong connection to the ground, from which he draws energy, strength, speed. Claire Kretzschmar is both strong and delicate, eager and absorbed. (Two dancers previously unknown to me, Samuel Melnikov and Cainan Weber, also made an impression.)

Lesser-used dancers have their day, as in an unabashedly emotional pas de deux for Emma Von Enck and Lars Nelson. Has either been given an extended pas de deux before? Their duet is of a type not often seen these days, full of rapture and Romantic feeling. She bourrées away from him, he lifts her into the air, she stretches in his arms, and then they embrace, as she places a head on his shoulder. Here, Farley re-embraces the romantic potential of the pas de deux, and why not? This is one of the things ballet, with its stretched lines and generous, expansive use of the body,  does well.

Toward the end, as Kretzmar enters for a solo, the atmosphere darkens and the music turns woozie. What follows is a loving exploration of the ballet vocabulary, revealing isolated movements: ronds de jambe, développés, coupé turns. The others return, and, after what looks like an extended center exercise, they do a reverence. It’s a lovely ending.

As a first ballet for City Ballet, “Architects of Time” is admirable. What it lacks, perhaps, is clarity and a greater sense of purpose, of boldness. One of Balanchine’s great skills, revealed once again in the performance of “Stravinsky Violin Concerto” that followed, was his ability to create strikingly original images that seared themselves on the eye, and then reverberated in the viewer’s brain long after. Like the X pose, legs and arms stretched as far as they will go, struck by the two dancers in the second “aria” of the violin concerto, they force the viewer to ask, what does it mean? Why is it so powerful, so intriguing? Farley’s ballet could use a little more of this boldness, in moments that stay in the memory and begin to suggest larger ideas about the whole. As it is, the ballet lacks a through-line, a guiding idea.

The evening ended with a solid performance of “Stravinsky Violin Concerto,” anchored by two couples: Unity Phelan and Amar Ramasar in the first “aria” and Ashley Laracey and Joseph Gordon in the second. Laracey was stepping in for Sterling Hyltin, just as, the night before, she had stepped in for Tiler Peck in “Symphony in Three Movements.” The more Laracey is put in these principal roles, the more confident she looks. Her delicacy and absorption have always made her special, but she has often been obscured by more showy dancers.

Danced by Phelan and Ramasar, the first duet seemed less tense and combative than usual. Phelan and Ramasar had a friendly, almost playful rapport; he smiled at her, almost egging her on, and she reacted, confidently, almost flirtatiously, as if responding to a dare. Phelan’s flexibility is eerie; she makes the ballet’s extreme moves look almost too easy, which in turn gives a different shade to the situation described in this duet, turning it from almost violent to stylish and seductive. In contrast, Joseph Gordon and Laracey were quietly engrossing, as they attracted and repelled each other with desolate eyes and vulnerable bodies.

The gala began with a short curtain speech by the company’s two leaders, Jonathan Stafford and Wendy Whelan (in a fabulous, sequined dress), followed by performances of Robbins’ “Circus Polka” and Balanchine’s “Scherzo à la Russe” by girls and young women from the School of American Ballet. In “Circus Polka,” where very young students do simple steps in crisp formations before finally forming an “I” and “S” (for Igor Stravinsky), the recently-retired Maria Kowroski stepped in as the tongue-in-cheek master of ceremonies. “Scherzo,” with its pseudo-Russian-doll cheerfulness, was an uncomfortable choice, given the images of Russia’s more bellicose and decidedly less cute side that are being played out on the world stage every day. That doll-like innocence is a relic from another world, one that only ever existed in the imagination. But then, Russia also produced Balanchine and Stravinsky, two of the most innovative, playful, and worldly artists of the twentieth century. At New York City Ballet, this is the Russia that is being celebrated.