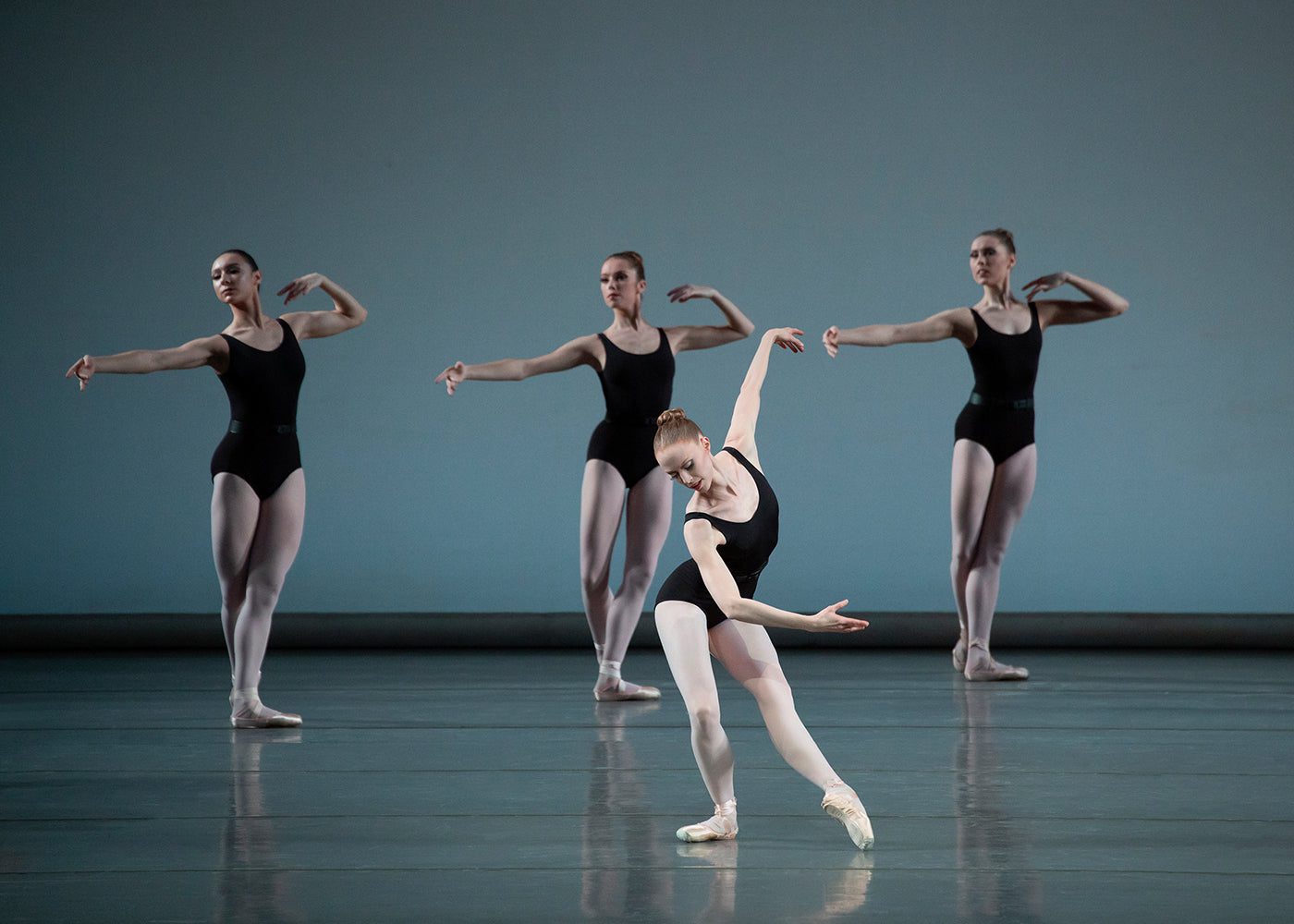 Fall is here, and the New York City Ballet embarked upon a new season on Tuesday night. Business as usual—except for the fact that I watched it on Wednesday morning. The dance scene in New York will remain virtual for the foreseeable future, alas. But there was great comfort in the fact that City Ballet could still offer an All-Balanchine program to commence its calendar year. The company’s fall season generally begins with a strong return to roots after the lengthy summer hiatus. I so look forward to seeing pristine executions of the Black & Whites, or a slate-clearing “Serenade,” as autumn’s crisp air blows in. So, even though the real dancers are still on an interminable break, it was a balm to have a mixed bill from the company’s founder nonetheless. The sounds of the orchestra tuning over the opening credits gave me chills—I’ve missed that noise so much. And for some reason it is a far more welcome simulacrum than the canned crowd roars being dubbed over sports games, which I find hokey.

But when the show began I remembered that digital dance is a very different animal. Case in point: the first piece on the docket was an excerpt from “Symphony in C,” a perennial closer. Though a live show would never kick off this way, it made perfect sense online. The first movement of “Symphony in C” is almost a complete ballet in itself, and if it were to ever run untethered to the work’s gargantuan finale it could indeed open a program. As I watched the performance, I was struck by the many surprising differences like this one. It led me to contemplate what is more or less pronounced from the seats at the David H. Koch Theater than from my kitchen stool.

I’ve decided that my enjoyment of these virtual shows really boils down to camera angles. “Symphony in C’s” camerawork was mostly fixed wide, which served it well since there is so much going on. The musical relationship between the soloists, demi-soloists, and the corps is intricately bound; you need them all in the frame to understand Balanchine’s overarching picture. Later in the program, for the Bach section of “Episodes,” the inverse was true, and the complex whole was obscured by unnecessary close-ups. Though Theresa Reichlen (in a debut) and Adrian Danchig-Waring were good in their roles, this part of “Episodes” is more about structure than star turns.

Reichlen and Danchig-Waring occupy the center of the stage, and they are flanked on both sides by squares of corps women, as well as a line of taller corps women behind them. When each of these groups start and stop moving is of the utmost importance, as is how they interface with each other and the leads—for Balanchine carefully parses the fugue format of Anton von Webern’s score. This filming undermined key moments, like when the first two corps women begin to dance. They establish the theme step of the entire movement; thus, the poignance of the da capo return to their phrase at the end was diminished. Or when Reichlen executed a skittery solo against the taffy-like moves of her surrounding retinue. The camera was mostly fixed on her, and the tension of this juxtaposition was lost. It was also odd to have various corps women’s fingertips or knees frequently intruding into the frame. The principals’ steps throughout, though interesting, are not exactly technically dazzling on their own. You wouldn’t take this pas de deux on a gig without its corps, so why show it that way on video? The totality Balanchine’s vision was obfuscated.

In general, pas de deux work best online because two people can more easily be contained by the engaging closeup format, and accordingly the two excerpts from “Liebeslieder Walzer” showed very well. The tight shots allowed home viewers a closer vantage than even front row seats at the Koch. This approximated intimacy was particularly neat for this ballet, in which the rest of the cast sits in chairs around the ballroom set to watch the action when they are not dancing. Internet spectators could feel as if they too were perched on plush seats just across the parlor, awaiting their own turn about the floor.

The details in costuming and décor were also wonderfully rendered in closeup. One could see how Maria Kowroski’s scapulae are as much a work of art as the filigreed bodice of her Karinska gown. And how Jared Angle’s coiffed widow’s peak was as dramatic as Lauren Lovette’s exquisite rondes de jambe à terre. Has that basic step ever been so effectively used as in this pas? I would nominate “Liebeslieder” as the perfect candidate to be made into a proper ballet film. (But I wondered why only one couple got a bow? That seemed like sloppy formatting.)

Dramatic sets and lighting seem to work best in the virtual realm. The plain blue cyclorama of so many Balanchine classics reads as slightly pixelated onscreen, almost gridded. This somewhat marred “Symphony in C,” “Tchaikovsky Pas de Deux,” and “Stravinsky Violin Concerto.” Yet the blackout background and glowing spotlights of “The Unanswered Question” section of “Ivesiana” looked great—after I got my own room sufficiently dark enough to get rid of my computer’s black mirror reflective glare, that is. But once I did so, Janie Taylor (excitingly out of retirement for the evening, like some others) was as luminous as ever as she floated above the ground on the shoulders of four men, tantalizing the tormented Anthony Huxley below. Her long cornsilk hair behaved like an extra appendage. And her beautiful, yet spectral, mien was the perfect complement to the abutment of the dissonant brass and reeds against the harmonic strings in Ives’s score. To air this uncommon bit of rep was an inspired idea.

It was also a good move to have Maria Kowroski, the company’s senior ballerina, introduce the season. Though there are occasionally toasts or speeches in front of the curtain before performances at the theater, every virtual show starts with a spoken introduction. And they have been uneven. Kowroski gave perhaps the best of these to date. She was well-spoken and warm, and she relayed a delightful anecdote about working with the late Karin von Aroldingen on “Stravinsky Violin Concerto.” This was to be Kowroski’s retirement year, and to see her speak so fondly about dancing in every single ballet on the program was frustrating: how terrible that we are deprived of a great ballerina’s swan song. Though it is nice to have ballet back in our lives in any capacity, the performance also served as a bittersweet reminder about how much we have lost.