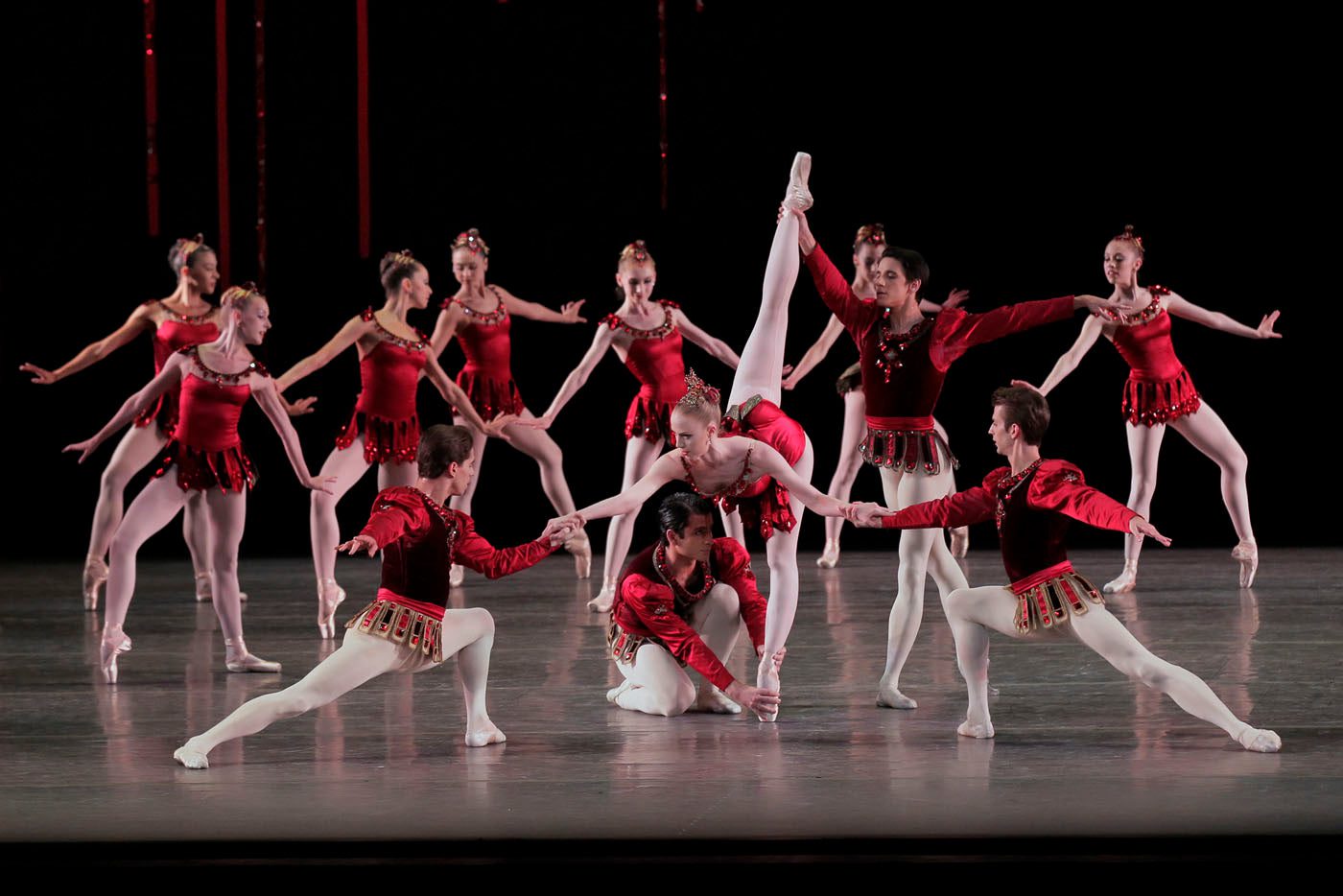 George Balanchine’s “Jewels” will turn 50 next year. It was, and still is, a ballet like no other; a perfect night at the theater and a great introduction to the art of Balanchine.

After its premier at the New York State Theater in April 1967, audiences and critics alike were instantly smitten by the ballet’s ingenious concept and artistic invention. It was the first plotless full-length work—an abstract trilogy, its three acts connected by a motif of gemstones (marvelously channeled by Karinska’s jewel-encrusted costumes and Peter Harvey’s scenery) rather than a narrative. It was also a star vehicle for some of the most prominent NYCB dancers of the time: Violette Verdy, Patricia McBride, Edward Villella, Suzanne Farrell and Jacques d’Amboise. “It gave many dancers roles that made them glitter as never before; and it contained choreography of dizzying variance, wicked wit, and shattering poignancy,” Farrell described the significance of this ballet in her autobiography. “Jewels” was instantly recognized as a remarkable choreographic achievement and proclaimed a masterpiece.

Set to music by three different composers (Gabriel Fauré, Igor Stravinsky and Tchaikovsky), “Jewels” is a study in contrasts: each part of the ballet has its distinctive color, mood, tempo, impulse and style; and each can be perceived (and danced) as a stand-alone work. Yet all three parts—the languid and contemplative “Emeralds,” the dynamic and athletic “Rubies,” and the regal and triumphant “Diamonds”—beautifully enhance and complement one another when performed and seen together.

Watching the performance of “Jewels” by NYCB these days is to experience an overwhelming sense of exhilaration—after half a century since its creation the ballet hasn’t lost its shiny lustre and ability to wow the audience. The performance I attended was especially notable for it was led by a superlative leading cast, featuring some of the brightest stars of the company’s ballerina roster: Tiler Peck, Ashley Bouder, Teresa Reichlen and Sara Mearns.

With its evocation of a lush, misty forest, the opening “Emeralds” looks and feels like a fairytale. An exquisite dance for a chamber ensemble (the cast consists of two principal couples, a trio of soloists and a corps of 10 female dancers), it is the neo-romantic part of the ballet in which the choreography brings to mind the images of courtly love and tragic destiny—themes that often permeated Balanchine’s works from his “Serenade” (1934) to “Davidsbündlertänze” (1980).

The supremely musical Tiler Peck, in the first ballerina role, gave her part its full romantic measure, dancing with an air of serenity and mystery, her fluid and softly-nuanced movements created an impression of a sustained unbroken phrase. In her solo, she turned and whirled about the stage as if being swept by morning breeze, her liquid arms created in the air an intricate tapestry of lines and patterns. She was assuredly partnered by the dashing Amar Ramasar, who, in turn, demonstrated impeccable deportment and projected noble charm.

As the second principal couple, Rebecca Krohn and Ask la Cour, imbued their languorous duet with a touch of affection, even drama—the two lovers as victims of tragic fate. They rendered each step with utmost delicacy as they gently moved through space as if walking on fragile ice.

Erica Pereira, Indiana Woodward and Antonio Carmena brought a happy note to the piece as they dazzled in a pas de trois, skimming through the invigorating steps with lovely spontaneity and ease.

A stark contrast to the unhurried opening act, the blazingly hot “Rubies” is a pure Stravinsky-Balanchine ballet in which the classical idiom is accelerated, stretched to extremes and thrown off-balance. Here the choreography captures the humor and high-voltage energy of Stravinsky music (“Capriccio for Piano and Orchestra”), sending the cast into a whirlpool of tantalizing dances, comic and athletic all at once.

In the principal roles, Ashley Bouder and Andrew Veyette gave the central pas de deux a special tinge of playfulness and vaudevillian mischief. But it was Teresa Reichlen, with her exceptional technical prowess and gorgeous lines, who commanded attention every moment she was onstage. Watching her channeling a feisty showgirl, her long beautiful legs slicing the air with spectacular abandon, was a sight to behold.

The final “Diamonds” is a pure classical ballet inspired by Tchaikovsky (selected movements from Symphony No. 3 in D Major, Op. 29.) It’s a tribute to the grand traditions of the Imperial Russian Theater and a nod to Balanchine’s dancing roots. It renders a majestic kingdom of white tutus, noble manners and epic grander; and Sara Mearns was its reigning queen. Exceptionally expressive and dramatically insightful in her dancing, that night she came closer than ever before to the illusion of “the freest woman alive.”

The New York City Ballet Orchestra under the button of its new music director, Andrew Litton, delivered an inspired rendition of the music, making this “Jewels” shine with a special bright light.

Next
The Good WIFE