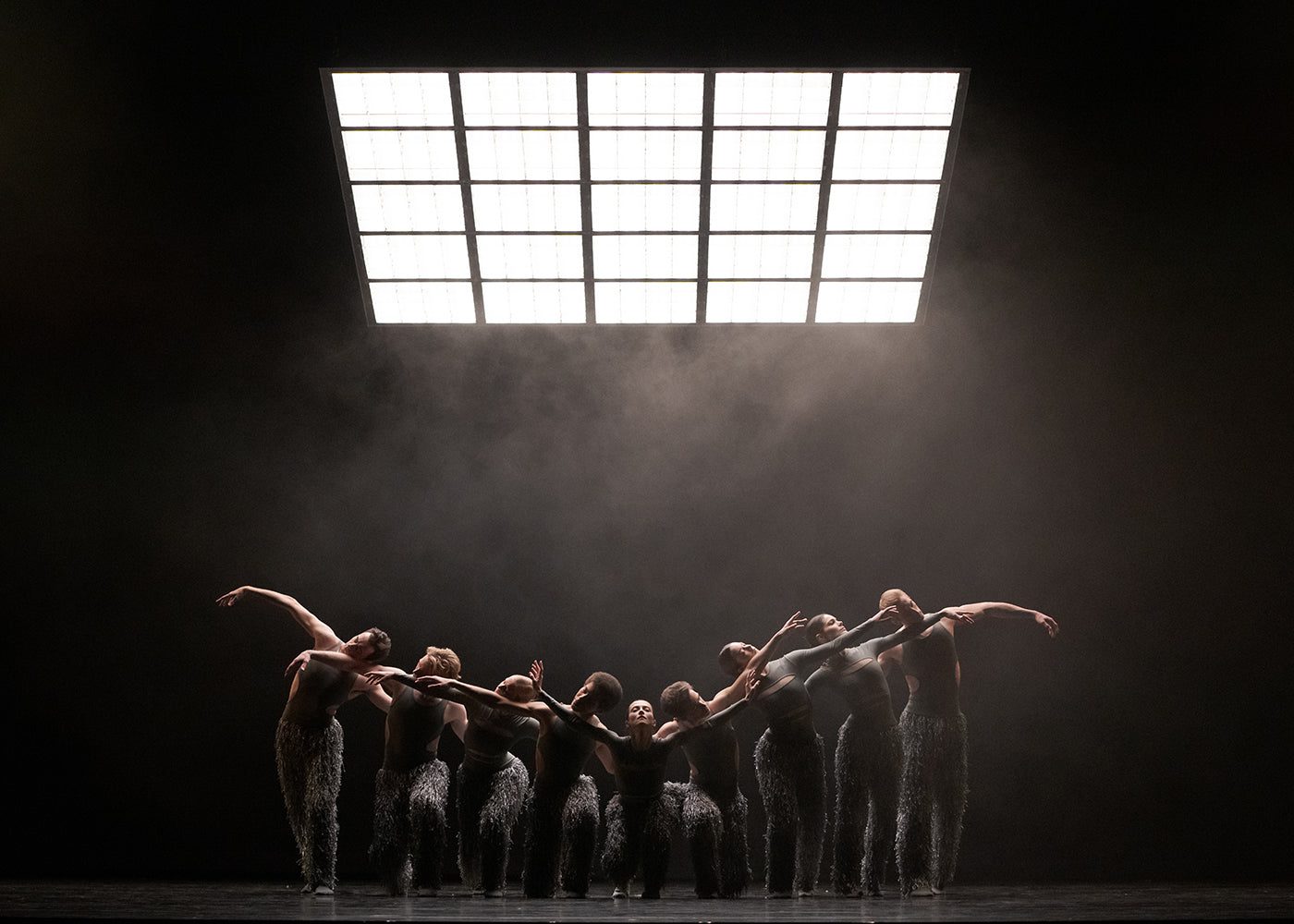 With new artistic director Hope Muir taking the helm of the National Ballet of Canada in January 2022, the company returned to the stage early March in a mixed winter programme that had a bit of the new, the old, and a goodbye. The quadruple-bill evening at the Four Seasons Centre included world premieres from Alysa Pires and Siphe November, Kenneth MacMillan’s ragtime classic “Elite Syncopations,” and a retirement performance from Jillian Vanstone in Christopher’s Wheeldon’s “After the Rain.”

Recently promoted to principal dancer, November proved his choreographic might in his debut piece for the company’s main stage, “On Solid Ground.” It was a short but effective contemporary number for nine dancers on the “joy, self-awareness, and self-expression of the body in movement.” This type of joy wasn’t exuberant, but rather a quiet and internal one that stays aflame even when no one is watching. In the opening phrases, the dancers crouch and link arms to create the shape of a large winged bird, solidified in its simple beauty by the warmth of Lesa Wandi, an African hymn by Choolwe Muntanga. November chooses to stick to unison for the most part, with the group staying close together as they move around the stage under a grid of light. The movements are loose, soft-edged, supple, and never breaking, much like November’s intuitive qualities. There is something refreshing about the unaffectedness of the work. Even when principal dancers Svetlana Lunkina and Ben Rudisin peel away from the group, their unassuming duet does little to shift attention away from the group, which jumps softly up and down in a dark corner upstage with their backs turned from the audience. “On Solid Ground” feels wholly even and comfortable in itself. It doesn’t press or aspire, and as it moves through Benjamin Gordon’s soulful lyrics on love, it leaves me with a comforting feeling that everything will be alright in the end.

The second world premiere of the evening, an airy neoclassical piece on pointe by choreographic associate Alisa Pyres, tended to greater ambitions. Pires, a strong contemporary choreographer, tested her classical metal in “Skyward” with dancers executing a complex series of quick turns, swooping attitudes, and phrases that barely landed before they took off in another direction, spritely conveying the upward flight of birds. The dancers looked completely committed to the gravity-defying quality of the thing, but struggled in their footing at times. While pleasant to watch and choreographically new for Pires, I much prefer the weight of her contemporary creations.

If I had to pick a highlight of the evening, it was “After the Rain.” In honour of Jillian Vanstone’s 22-year stage career, the two-act piece originally created by Wheeldon for the New York City Ballet, was selected by Vanstone for the occasion. It made total sense given Vanstone’s affinity for Wheeldon ballets and having performed the title character in his “Alice’s Adventures in Wonderland.” The first act consisting of three couples is minimalist and all clean lines. To the gentle ticking of Arvo Pärt’s Tabula Rasa, the female dancers stand head on to the audience and we see their legs move from penché arabesque to second position and back like the precise hands of a clock. It is an astounding showcase for first soloist Calley Skalnik and second soloist Genevieve Penn Nabity, two up and coming dancers in the company who interpret their roles with maturity and technical confidence alongside Vanstone. The second act abandons all mechanics, and we see Vanstone, hair loose and in soft shoes, perform a tender pas de deux with partner Harrison James. It’s no exaggeration to say that everything melts away in this moment. Vanstone and Harrison are in a world of their own, entwined in a tenderness that only dance might speak of. There is an astounding patience and simplicity to Wheeldon’s choreography for Pärt’s Spiegel am Spiegel. It allows us to see Vanstone’s brilliance as storyteller, technician, artist, and spirit.

At the evening’s close, the company took the stage with “Elite Syncopations.” Its appeal is in the optics rather than choreography, with eye-catching unitards hand-painted in patterns, stripes, and solids (Ian Spurling), as well as an on-stage ragtime band replete with honky-tonk piano. However, even in its impressive trimmings, MacMillan’s 1974 ragtime vision felt a bit outdated and flat with its gimmicks between flirting couples and cutesy character roles. Tanya Howard was the self-absorbed seductress in the “Calliope Rag,” but altogether too stiff and proper, she came off like a severe late-career Madam. Second soloist Noah Parets had a knack for winning the audience over and fully lived up to his pink suspenders, but his young-and-awkward duet with Jaclyn Oakley seemed like a joke for an older crowd. Several ragtime dances ensue and overall, I would have liked to see a less exacting approach from the cast in what’s meant to be a late-night, boozy dancehall affair. Once again, the belle of the ball was Jillian Vanstone partnered by Harrison James. This time, she appears in a white unitard bedazzled with red stars on each butt cheek under a glittering red hat, smiling like a rabbit who has just disappeared its magician. In an acrobatic 180-degree turn, its amazing to see this completely different side of Vanstone just after her moving performance in “After the Rain.” A confident and commanding presence, this final show piece is a real testament to her versatility as an artist and is certainly one to remember her by.

Next
It’s Only Rock and Roll