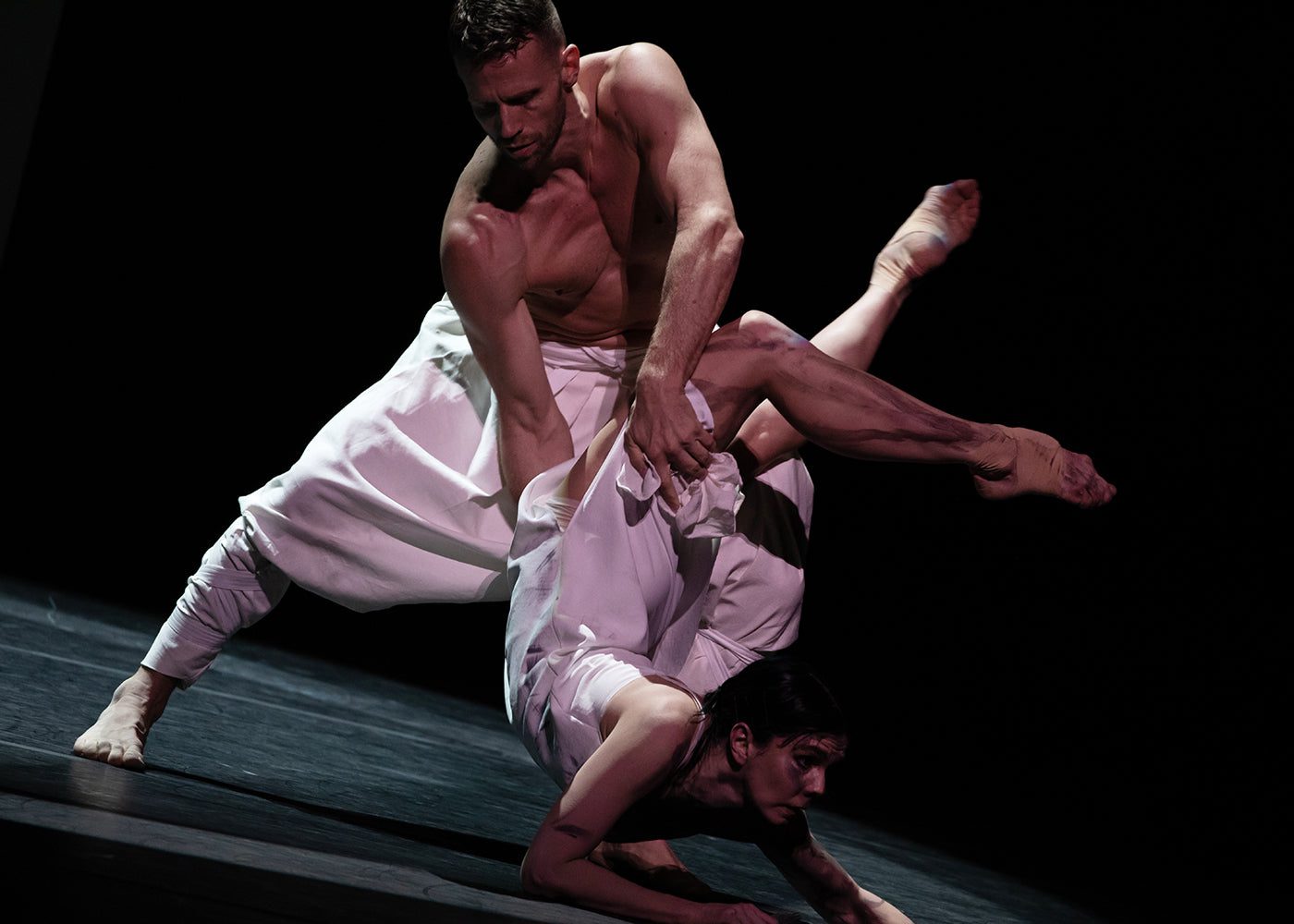 It is always interesting to see what a famous ballerina does when given the freedom to program her own show. On Saturday, Natalia Osipova, the Russian-born superstar (who has been a principal with the Royal Ballet since 2013), brought her much-hyped and sold-out extravaganza, “Natalia Osipova: Force of Nature,” to City Center for one night only. The ambitious, crowd-pleasing lineup—including the “Don Quixote” Act III Pas de Deux and “The Dying Swan” solo—was announced in a press release in early January and promoted in an interview with Pointe’s Kyra Laubacher less than a week before the performance. I don’t know what happened in the days leading up to the show, but by Saturday night “Don Q” and “Dying Swan” were out, and several monotonous contemporary dances in jammies were in. Also in, and kicking off the show, was the Act II Pas de Deux from “Giselle,” her signature role.

“Giselle” seemed like a fair trade then, but it was strange that she started it off by omitting the famous à la seconde and penché sequence. Still, she was lovely. And her Albrecht, fellow Royal Ballet principal Marcelino Sambé, was fantastic throughout the evening. Balletgoers were actively sighing all around me every time Sambé swished Osipova like a bell from fifth on pointe to a low saut de chat lift, which made me think of the similarities between ballet and wine cultures, and how people just want permission to enjoy something. Ask someone to blind taste a glass of wine and they panic and second guess their own perceptions; tell someone they are sipping Cheval Blanc and they will confidently rhapsodize about it. Something similar was afoot in the Osipova audience. Much of what she did was beautiful, but nothing was as good as the amount of insert applause would lead you to believe. Osipova is indeed a Giselle for the ages, but this performance was not anywhere near the best of even her YouTube “Giselle” output. (Gushing over the film of her 2014 Act II with Carlos Acosta, for example, is merited.) She did float impressively in her entrechat-quatres and passé sautés, but her landing foot for each massive fouetté jump in the coda was completely turned in. It felt like she was hitting some marks for the audience, but her heart wasn’t really in it. The audience, however, was all too ready to clap up a storm for any old step. It was like Fall for Dance on steroids.

Osipova’s next appearance was in the Act I “Bedroom” pas de deux from Kenneth MacMillan’s “Manon,” with new Royal Ballet principal Reece Clarke. Sexual ecstasy is hard to convincingly excerpt, especially when done to a grainy sound recording and without full sets. When the curtain rose on Clarke, writing with a quill pen at a lonely desk in the corner, he evoked Jimmy Fallon’s Thank You Notes bit. Even so, the crowd applauded for some of the acrobatic partnering moves even though they were a tad clunky. Osipova was more committed to her acting than her lines: her knees were often bent, and her shoes were so dead that she didn’t point through her feet the whole way. I don’t mind when a dancer sacrifices technique and aesthetics for dramatic realism in story ballets, but since the story was mostly missing, and Osipova only made three appearances on pointe in nine dances, it left one wanting.

Also, “Manon” was followed by Sidi Larbi Cherkaoui’s “Pure,” which was basically “Manon” with a crayon and smoke effects. She danced this with her husband, the modern dancer Jason Kittelberger, in bare feet and a ponytail. She wore a chic, white silk negligee instead of “Manon’s” off-white corset undergarments, but it was just more topsy turvy partnering (though at a lower altitude) until Kittelberger left the stage. He fetched her a little bowl and a paintbrush, which she brandished about monomaniacally. Then she covered herself in brown streaks while doing yogic poses. After a while she started to paint the floor, and just as I was pitying the stagehands’ intermission cleanup, Kittelberger reemerged with a white towel and started wiping up whatever he could of her mess. They began to dance together again, with her painting him and him wiping them both down as much as he could. The metaphors were too obvious, and the acts themselves were quite funny. It was hilarious when he lifted her to his shoulder and reached up to clean her armpit, and when he tried to wipe the brown skidmarks running from her rear down her leg when she split her legs. My mom brain wanted to shout to him to just take her paintbrush away.

Kittelberger returned twice more in the second half, as both dancer and dancemaker. He choreographed the only premiere: “Weight of It,” to moody music by Ilan Eshkeri. In this meandering, overlong dance, he joined Osipova and Sambé for cheerless writhing in off-white loungewear. There was a bondage prop, with which they tied themselves together like a chain gang for a while. In Kittelberger’s “Ashes,” the peculiar pair of solos that closed the show, he teetered on a stool and performed slinky dolphin floorwork, this time in baggy black garb. (No costume designers were credited in the program.) Osipova interrupted his solo by dragging in a thick floor rug, then danced her own number of folk-accented memories—including one gargantuan Kitri jump that felt like a blast of fresh air. At the end, she rolled herself up in the rug and the curtain fell. It was an unconventional way to close out a prima ballerina showcase, I’ll give her that.

I was confused and intrigued by the whole night. Why the bait and switch with the programming? Why solicit the “Don Q” fans then deny them tutus and tiaras? It didn’t do her or her Kittelberger any favors. When you enter a performance with certain expectations, it can be hard to get into a mindset that might be more appreciative of radically different fare. It was like ordering chateaubriand and getting vichyssoise. The audience went from sighing and clapping at the drop of a hat to yawning. When Osipova finally did some bravura turns and tricks in the penultimate number, Alexei Ratmansky’s “Valse Triste,” the crowd didn’t even applaud for all the feats: numbness had set in. Something was off between the billing and the execution of this evening. Perhaps she should have booked the Joyce Theater instead and announced a new direction? Or, instead of “Force of Nature,” maybe it should have been called “Osipova’s Pandemic Diary.”

I’m no fan of showpiece warhorses one after another, but it was bizarre that Osipova marketed them and then didn’t deliver them or explain their absence. (I guess I should’ve given more weight to the campaign poster, in which she is barefoot in arabesque with a scarf and a turned-in standing leg). As it was, her most classical offering was the abridged “Giselle.” And she curiously outsourced two dances to guests. She invited teenagers from the American Ballet Theater School and Studio Company to do the showy “Flames of Paris” pas de deux, with mixed results. She also handed off Frederick Ashton’s “Dance of the Blessed Spirits” to Clarke, which was disappointing. I was excited to see her tackle this male solo, full of controlled arabesques and big sissones. This gender-flipped casting experiment was one of the most interesting draws of the night. Clarke was fine, he had nice long lines but a blocky movement quality.

There were two pieces on the program that served Osipova well, however: Ashton’s “Five Brahms Waltzes in the Manner of Isadora Duncan” and “Valse Triste.” Perhaps the live music helped. With the talented Oleksandr Grynyuk at the piano, the Duncan Waltzes marked the first time Osipova seemed truly inspired by her chosen material. Barefoot again, in a Grecian gown and a short wig, she committed to the freewheeling movements with her whole body. I’ve seen this piece done with more softness and nuance before, but I enjoyed Osipova’s go-for-broke interpretation; it felt authentic to her. She wafted her scarf like Sylvia wields a bow, and she scattered petals like a madwoman instead of a flower girl. She danced with an exciting kind of desperation, more an unhinged Ophelia than an Earth Mother or goddess. From someone so good at hanging in the air, I didn’t expect this grounded dance to be a highlight.

But leave it to Ratmansky to fully unleash her talents. His “Valse Triste” pas de deux, made for her and her former frequent partner David Hallberg (whose role was danced by Clarke), captured her in all her paradoxical glory.  She is an artist who contrasts supersized textbook steps with a defiant abnegation of form. For example, she almost always does her “Giselle” entrechat-quatres with dangling arms and a slightly hunched back, demonstrating how, without even using her ballerina wings, she can still fly higher than everybody else. The juxtaposition is dazzling. She plays up her beautiful, doll-like features in mime (that dark hair, parted sharply in the center against her pale skin, those sculpted cheekbones!) and then runs aggressively across the stage like a linebacker. Unlike many prima ballerinas, she is not a meticulous craftsman; she doesn’t seem to have any interest in making sure that every moment is perfect. Rather, she is impetuous and explosive. Ratmansky’s dance lovingly demonstrated her affectations and sometimes comical extremes, as well as her astonishing power and thrilling wildness.  In the Pointe interview, when Laubacher asked Osipova why she wanted to put on this show, Osipova replied that it was partly to prove that: “I’m not so old! I’m just 36 and can still dance.” Why sure she can. But is she sure about what she wants to dance?

Next
Off to the Races