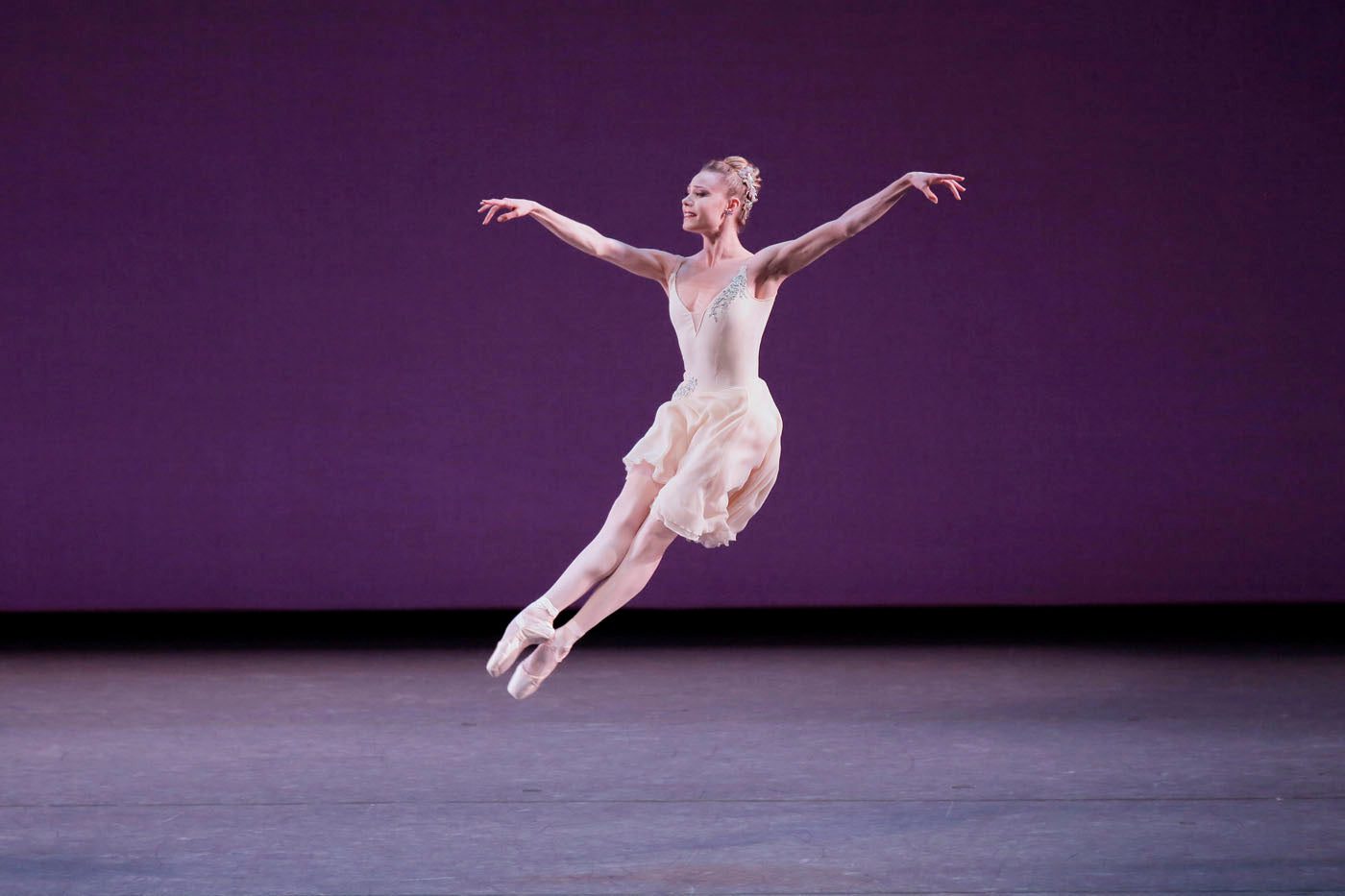 A dance of transcendent beauty, “Mozartiana,” set to the musical suite of the same title by Tchaikovsky, was George Balanchine’s final masterpiece. The ballet was created for Suzanne Farrell, his last and greatest muse; in a way “Mozartiana” was his farewell gift to her. Choreographed in 1981 to commence the New York City Ballet Tchaikovsky Festival, this ballet was also a heartfelt homage to Tchaikovsky himself, whom Balanchine all his life regarded as a mentor and inspiration. “Balanchine at the age of seventy-seven had given us a vision of heaven as he interpreted it from the Lord’s Prayer, ‘on earth as it is in heaven,’ and it was a very beautiful place indeed, a place past desire, where dancers perform for the glory of God,” Farrell evocatively described this ballet in her autobiography Holding On to the Air.

“Mozartiana” in all its spiritual glory was the centerpiece of the all-Balanchine program that NYCB presented at the David H. Koch Theater during the company’s winter season. In a revelatory performance, Sara Mearns, in the role originated by Farrell, brought the entire ballet to a new emotional height. In the opening “Preghiera,” her dancing was so dramatically expressive and poignant she completely disappeared into her part; it seemed as if she wasn’t merely dancing but praying. I have never seen before the opening “Prayer” danced so perceptively and sincerely. Alternating meditative slowness with spirited passion, Mearns created a special world onstage, both private and sacred, dancing as if conversing with the divine. Remembrance, harmony and peace were movement leitmotifs here, all perfectly attuned to the sublime “Ave verum corpus.” In her solemn ritual, Mearns was surrounded by a quartet of little girls, all dressed in matching black tulip-shaped tulle gowns. They beautifully mirrored her poses and gestures, giving the whole opening part an icon-like air.

With the lively “Gigue” that followed, the mournful prayer gave way to jubilant celebration. Troy Schumacher, yet a member of the corps de ballet, made a fine impression in this solo, his footwork vigorous, crisp and well-articulated.

The stately “Menuet” invited on the stage four ballerinas (they looked like grown-up versions of the girls who danced in “Preghiera”) in some of the loveliest sequences Balanchine ever devised for a chamber ensemble. It is the perfect chance for the up-and-coming female dancers of the corps to showcase their musicality and expressive power; and Marika Anderson, Megan Johnson, Emily Kikta, and Gwyneth Muller spectacularly rose to the occasion, dancing with appealing nuance and luster.

Yet the focal moment of “Mozartiana” is its central pas de deux choreographed to “Thème et variations,” which brings back onstage the leading ballerina and her cavalier (the noble and courteous Tyler Angle) for an exuberant series of duets and solos. Watching Mearns inhabiting the world conjured by Balanchine, Tchaikovsky and Mozart was to witness nothing short of a miracle. She is a one-of-a-kind dramatic ballerina, and “Mozartiana” provides a superb vehicle for her extraordinary gifts.

The program began with an exuberant rendition of “Walpurgisnacht Ballet,” another Balanchine ballet in which Farrell originated the principal ballerina role. Choreographed to dance music from Gounod’s opera “Faust,” the ballet sets in motion the central couple and an ensemble of 22 ballerinas. With a nearly all female cast, “this was definitely the world according to Balanchine,” Farrell mused in her book. Originally, “Walpurgisnacht” was envisioned as a pièce d’occasion for a gala; but the ballet proved so popular with the audience that it was ultimately included in the company’s repertoire.

Dancing with exceptional clarity and neat phrasing, Teresa Reichlen was glamorously poised, yet somewhat impersonal and aloof, as the leading ballerina in the ballet’s first “formal” part, where the movements—and the dancers—look elegant, glamorous and languid. Still, despite her remoteness, she was endlessly captivating to watch. With her exquisite turns and spacious arabesques, her deep plunging swoons into her partner’s arms and her finely etched footwork, she delivered a master class in prima ballerina technique. (Adrian Danchig-Waring was her gracious cavalier.) Yet she was a force of nature—wild, fearless, passionate—in the ballet’s final section, in which all 23 ballerinas, in long lavender gowns, flooded the stage. Their hair flying unbound, they whirled about the stage with thunderous speed and untamed abandon, holding the audience bewildered and awe-struck.

Megan Fairchild and Gonzalo Garcia brought to life the poetic spirit of Ravel’s music in “Sonatine,” a lyrical pas de deux in which the delicate and intricate movements masterly convey the impressionistic aura of the music. The entire duet comes across as an intimate conversation that unfolds in a quiet, languorous manner—a serene, sweet talk between two lovers whose relationship is harmonious, time-tested and secure. Fairchild was dancing with delightful lyricism and musicality, but she looked too somber and listless to properly transmit the piece’s tranquility and warmth. Although an able partner, Garcia wasn’t always technically refined.

The program culminated on a high note—there is hardly a better finale than the life-affirming “Symphony in C.” Set to Bizet’s Symphony in C Major, this ballet is the ultimate showpiece for the company’s dancers. Its four movements form one exhilarating whole—a continuous, ever-growing crescendo that culminates with one of the most stirring ensemble numbers in all modern classical ballet.

Ana Sophia Scheller and Andrew Veyette led the ensemble in “Allegro Vivo” with radiant brio and style. Sterling Hyltin was stately and enigmatic in the languorous “Adagio,” with Justin Peck as her fastidious partner. Ashly Isaacs and Joseph Gordon gave “Allegro Vivace” an extra jolt of youthful energy and vigor; and Lauren King and Devin Alberda sparkled in the ballet’s final movement that brought onstage the entire cast in what looked like a dazzling celebration of dance and music.