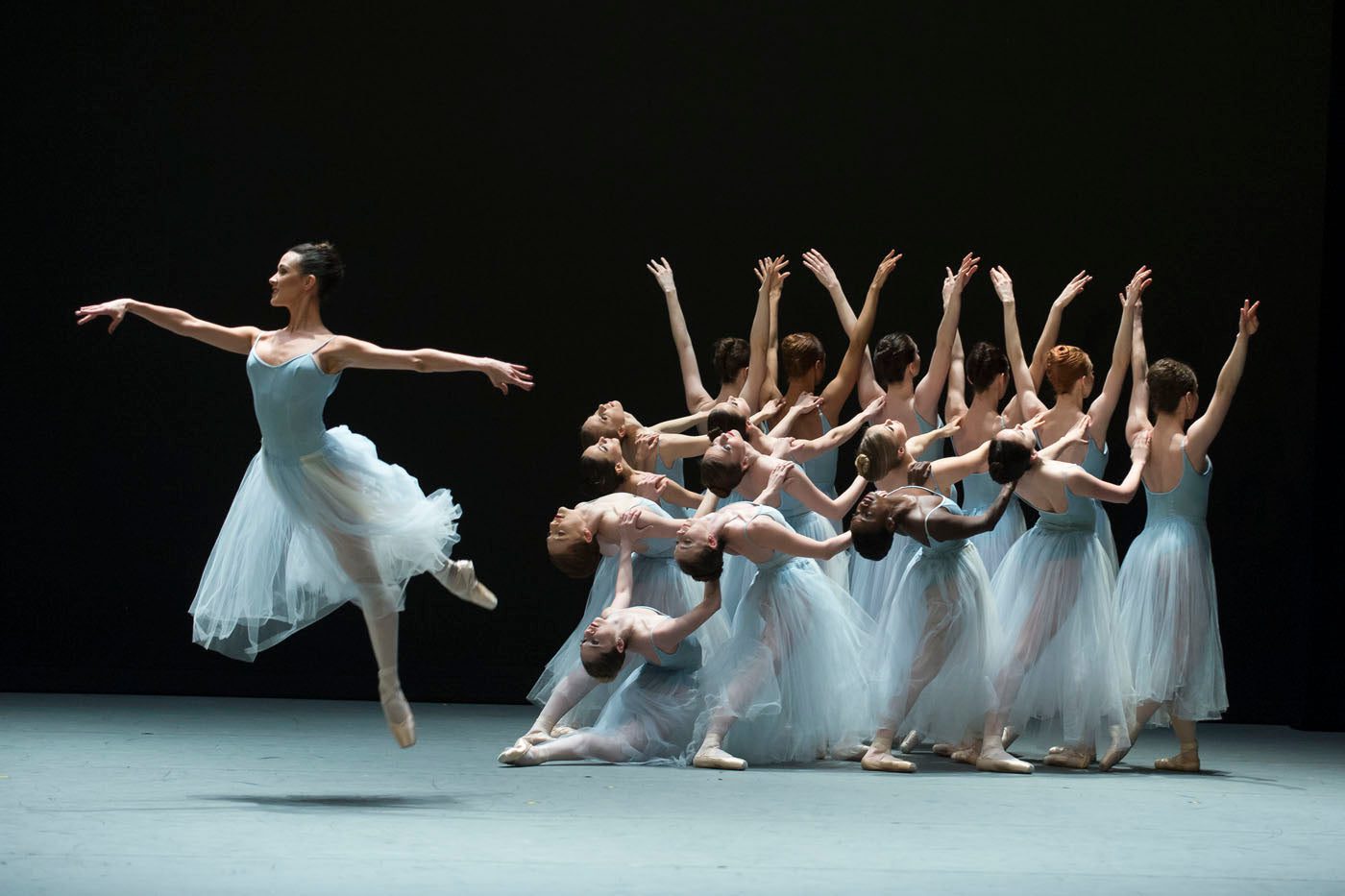 There was much to admire about the Washington Ballet’s program titled “Mixed Masters” which the company brought to the Kennedy Center Eisenhower Theater in April. This sophisticated, ambitious and highly enjoyable triple bill included signature ballets by the 20th century great choreographers: George Balanchine, Frederick Ashton, and Jerome Robbins—the masters “whose genius has shaped our art form immeasurably,” artistic director of the Washington Ballet Julie Kent wrote in the program notes.

The company rose to the challenges of the program that featured “Serenade,” “Symphonic Variations,” and “The Concert (or, The Perils of Everybody),” revealing unexpected nuances and touches in all three pieces. For the most part, the dancing was assured and accomplished, especially among the soloists. One could feel that the dancers enjoyed every moment onstage, dancing with sheer abandon and excitement, striving for perfection and giving their all in the process.

Over the past few years, there was a string of notable performances of Balanchine’s “Serenade” in Washington, D.C., notably by New York City Ballet. And just recently the local audience was treated to the most inspiring “Serenade” in memory, staged by Balanchine’s supreme ballerina and his muse Suzanne Farrell and performed during the farewell season of the Suzanne Farrell Ballet at the Kennedy Center Opera House. It was a “Serenade” for the ages—the benchmark to which all other stagings of this ballet should aspire.

In the Washington Ballet’s rendition, “Serenade” reflected its sense of youthful fragility and innocence, hinting to the days when the ballet was originally choreographed for the students of the School of American Ballet nearly 85 years ago. Set to the lyrical strains of Tchaikovsky’s Serenade for Strings in C, Op. 48, the piece celebrates the glory and power of the female corps de ballet. Inspired and guided by Tchaikovsky’s music, Balanchine created some of his most visually arresting ensemble choreography, conjuring onstage the imagery of unparalleled transcendence and beauty.

Yet the ensemble dancing on Friday night was the least satisfying part of the performance. The corps de ballet, however dedicated and vibrant, looked somewhat uneven, their footwork lacking definition and polish. It was the dancers in the principal roles, especially the excellent EunWon Lee, who made an impression.

Eloquent and graceful, Lee proved a tragic heroine from the first moment she appeared onstage, bringing more than a pinch of drama to her part known as “The Waltz Girl.” Her expressive and exquisitely poetic dancing, as well as her solemn features, reflected the romantic heartbreak and tragic predicament of her character. She was aptly partnered by Gian Carlo Perez in the second movement of the ballet, “The Waltz;” and Brittany Stone, in the role of the Dark Angel, also stood out for the clarity and incisiveness of her interpretation.

Unlike “Serenade,” Ashton’s “Symphonic Variations” is a rarely performed ballet. Two years ago, American Ballet Theatre brought this work back to its repertory after a nearly 10-year hiatus and performed it during the last two seasons at David H. Koch Theater in New York. Yet the Washington audiences haven’t seen this piece for neatly two decades. The last time “Symphonic Variations” graced the stage of the Kennedy Center was in 2001, when the Royal Ballet brought it to Opera House as part of its all-Ashton program. So it was a real treat to see the Washington Ballet’s cast tackling the stylistic and physical rigors of this timeless classic.

Created in 1946 and set to César Franck’s score of the same title, “Symphonic Variations” is pure and deceptively simple ballet for six dancers (three women and three men). (The original cast was led by Margot Fonteyn. Another original-cast dancer of note was Moira Shearer, a star of the 1948 movie The Red Shoes.) The atmosphere of serenity and peace permeates this work from start to finish; and the thoroughly classical choreography combines the moments of stillness with the languid flow of intricate movement. Resembling living statues, the dancers wear all-white costumes that suggest classical Greek attire, their hair adorned with a band of silver leaves. The greenish backdrop with floating black lines is simple and elegant and adds to the ballet’s aura of tranquility and repose.

Despite its visual simplicity, “Symphonic Variations” is an endurance test for the dancers. Kudos goes to the entire cast: Esmiana Jani, Corey Landolt, Nicole Graniero, Daniel Roberge, Ayano Kimura, and Alex Kramer. The dancers deserved nothing but praise for their selfless and dedicated performance.

The superb Glenn Sales played the piano solo part of Franck’s music with a lush tone and bright sound, but it was his hilarious turn in Robbins’ masterpiece “The Concert” that the audience would remember for a long time. In this ballet, Sales was a star in his own right, from the moment he walked to a piano situated onstage and blew a huge cloud of dust with his handkerchief from the piano keys, to the ballet’s finale when he fervently chased with a net all of the characters around the stage.

A comic gem like no other, “The Concert” (1956) is both a sidesplitting spoof of a Chopin piano recital and an apt meditation on human nature, thus the ballet’s subtitle “The Perils of Everybody.” Our life is a concert—the choreographer seems to be telling us—and we all can enjoy it, if we accept our differences and get along with each other.

The ballet is full of peculiar personages and unfolds as an improbable sequence of the most outlandish reveries or “the short anecdotes” as Robbins described them.

The cast seemed to be enjoying the fun and made the most of their roles; and if at times the corps de ballet looked dangerously out of sync—that was the whole point.

There were many effective performances from the leading crew. The willowy Brittany Stone gave a winning portrayal of an eccentric girl in a floppy hat. Lost in her dream world, she was at one point literally embracing the piano. Rolando Sarabia was pitch-perfect as the errant husband with murderous fantasies, complete with a cigar; and the petite Tamako Miyazaki proved a real comedienne, claiming the spotlight as the ardent music lover and as the bespectacled dancer in the “Mistake Waltz.”

Next
Forsythe at the Ready