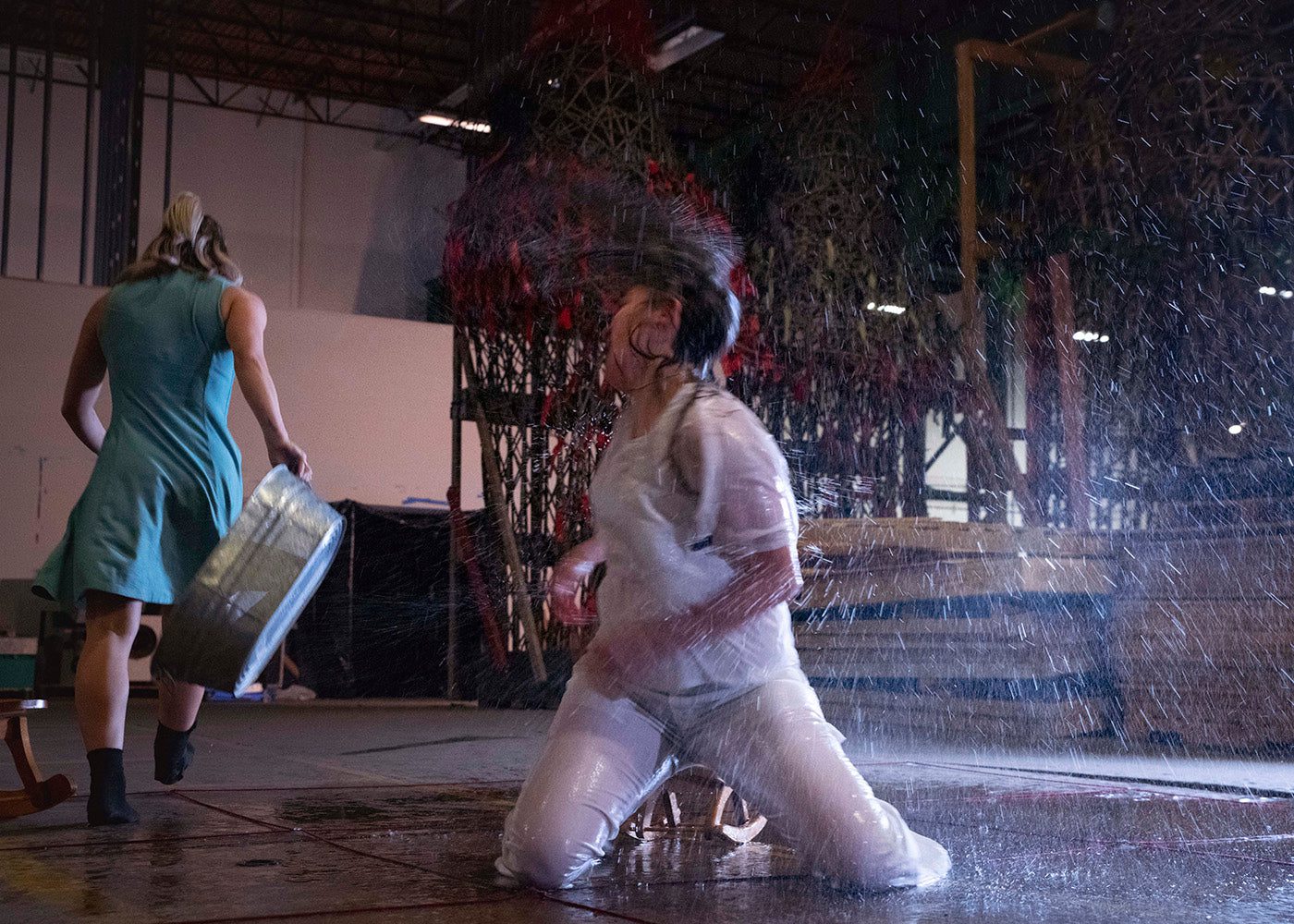 I must admit, I was scared walking in. The warehouse was dark, and I got lost. I called for directions, and someone shined a cell phone light to show me the path to the front door. I walked in, and was asked to sign a document to ensure I would not sue the company if I tripped and fell over the string that would be present through the performance. I’ll repeat—I was scared at first. But wow, what an incredible evening! I’m so glad I drove through the dreary night, in the rain, to see this performance.

Mignolo dance pulled it off again—a multimedia experience about mental illness and mental health. To begin, one dancer (Charly Santagado, co-choreographer) sitting inside an archway similar to a manger moved to a complex poem (“Visits to St. Elizabeth’s” by Elizabeth Bishop) either about a man, or about mankind, speaking of a “House of Bedlam.” She reiterated the first line after every new stanza, moving with precision through neck tics and odd twisting movements with a solemn but determined face. The poem unfolds, each repetition of the story about a cranky man, a busy man, a tedious man, a wretched man. Is the world flat or round? The movements resemble a sign language for the deaf or hard-of-hearing (the makeup of which the mignolo dance calls Movenglish) as the motions and the words wrap around each other, clearly depicting the sense of disarray and distress this person is feeling.

Suddenly, a film is projected above her; the audience looks up to see what’s happening. A woman in a green dress is tearing apart the walls of a room. The walls’ material is silver foil, and its crackling noise and the music together create a dramatic sense of being out of control. And then, somehow, we realize this woman is right behind us. We turn 180 degrees to see the room being torn apart, the woman in a fit of rage and agony, surrounded by string. She is screaming. She cuffs her ears as the music gets louder and faster.

This is just the beginning of a 70-minute performance in which the audience is asked to actively participate, moving to different places in this drama. Some audience members are reticent and some are clearly absorbed in the experience. A refrain of the performance is the interaction between a therapist and the woman in green—the patient­—sitting in chairs across from each other. When they ‘speak’ (pre-recorded text), their movements simultaneously connect with the words, and they have a ‘discussion’, in movement, many times during the night. “How was your week?” the therapist asks. “The same, but not exactly the same,” says the patient. The conversation over time shows the intensity level rise for both the therapist and the patient.

The patient takes the therapist down to what she calls ‘the basement,’ an area that appears to represent a mental institution, where individuals portray their intense personal traumas through repetition. One person is sitting counting on an abacus; another is working on puzzles in ways that could never solve them, holding them upside down or putting her arms through the rungs. She splashes herself in a metal tub like the ones used years ago to wash clothing; the patient takes the tub and dumps the water on her. Chaos ensues.

There is an extended period where the choreography is positioned in and around three cars. One dancer hits her head against the horn; lights of another car come on as the dancers use the vehicles as props in unconventional ways. People come out of windows feet first, they are on the hoods and through the sunroofs, they are interacting chaotically and suddenly not interacting. It is painful to watch how disturbed these people look, and yet the sense of urgency is similar to what one sees on a highway when traffic is backed up—angry, unhappy drivers and their passengers. Only more so.

When the patient and therapist talk again, their movements are wilder and less restrained, though the words are the similar. As the dancers start to merge together, it is clear that the therapist is in their world. She is guiding them; they are all together, and guitar strings sound in the background as the music emulates the comradery. Each dancer is lifted individually by the group as they all lean in together and become cohesive and synchronized to help each other. The group is simulating growth, and community, and offers a very memorable end to a piece that seemed very sad at its start.

But it’s not over. There is a tunnel with silver foil being pointed to by several dancers. They are asking the audience to step into the tunnel, while a disembodied voice tells the audience that it is dangerous, and that they should not enter under any circumstances. The audience enters anyway.

And there we all stood, in a circular room of silver foil, looking at each other. How terribly poetic. One audience member turned to me afterward and said, “It’s a teaching. It really touched me.” For me, it was a powerful, emotionally riveting experience. I was impressed with the depth of the presentation: the use of video, the implementation of many created sets inside a warehouse, the dimensionality of the movements the dancers used, and the words and music that worked seamlessly with it to create an understanding.

Next
You Cannes Dance