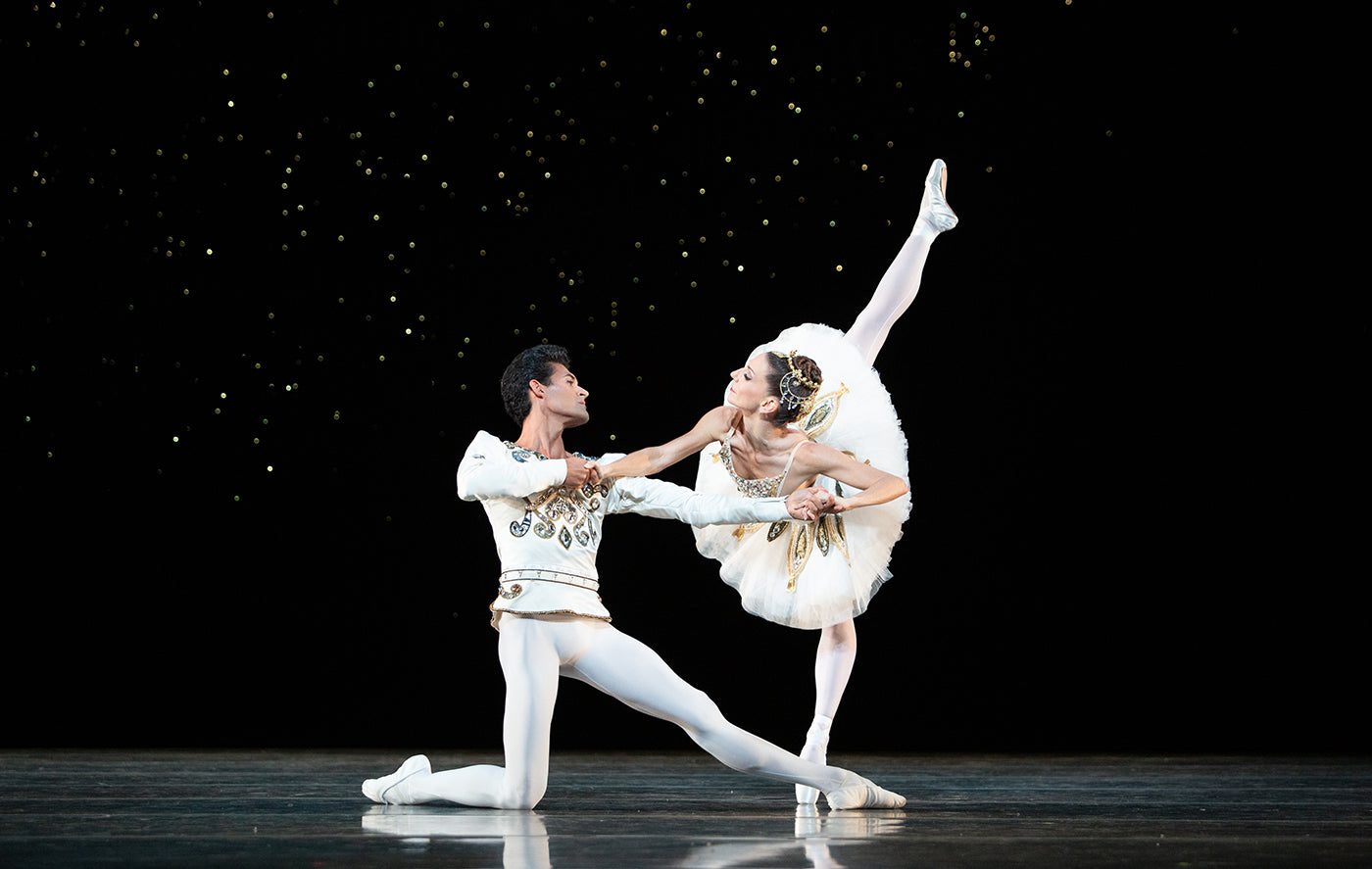 This return of Miami City Ballet felt like lifting the curtain on a new, wide-open moment. Fifteen years have passed since MCB last visited Berkeley’s Cal Performances; ten years have passed since MCB founding artistic director Edward Villella stepped down. The world is now post-covid (sort of), and the dance world is post-leadership changes at its Balanchine bastion, New York City Ballet. And so, we Californians had a clean stage for seeing what Lourdes Lopez has done with Miami’s Balanchine legacy over her decade of helming the 52-member troupe. What a refreshing view it was.

The audience dependably oohs and ahhs when the curtain rises on each act of “Jewels”—Balanchine was never savvier about opening spectacles than in this 1967 triptych. But in this performance, the amazement (almost) never abated. From the smallest corps dancer in the back row to the principals, this was clean, clear, musical dancing, lush but unpretentious, spirited and generous.

Much of the amazement was in seeing the occlusions layered onto a choreographic gem over the years wiped away. It’s almost hard to believe that when MCB first brought “Jewels” to UC Berkeley in 1999, the ballet had never been seen in its entirety on the West Coast. Now San Francisco Ballet has danced it many times, and companies around the world have taken it on, with eclectic and sometimes dispiriting results—as danced preeningly by the Mariinsky, it doesn’t even feel like “Jewels.”

In Miami City Ballet’s rendition, the power of a transparent, musically driven approach shone most powerfully in “Emeralds,” the subtlest act, to dreamy but also mournful selections by Faure. The depth of Balanchine’s choreography as liturgy, as ritual, re-emerged; you could feel the influence of his Russian Orthodox roots. Most moving of all was the coda, three men and four women in simple walking patterns like a church procession, until only the three kneeling men are left, gesturing with reverence to the empty air. Elsewhere in “Emeralds,” the Miami dancers captured the ballet’s feeling of interior reverie, and the audience got to be voyeurs. Nicole Stalker had the stage-circling, rushing solo in the pas de trois, and she rode it like waves in the ocean, so that we saw one long breath suspended by the strings of the Berkeley Symphony in the pit. Dancing the main pas de deux role originated by Mimi Paul (the one with the arms and legs that seem to tick on the beat like the hands of a clock), soloist Jordan-Elizabeth Long left the most pungent impression in her play of slow versus fast momentum and her floating bouree.

“Rubies” calls for the abandonment of subtlety, and this “Rubies” had it all. Because the chief virtue of the Miami dancers is a sense of spontaneous musicality, it mattered hugely that the pianist, Francisco Renno, gave a rip-roaring rendition of Stravinsky’s Capriccio for Piano and Orchestra. Alexander Peters was a last-minute sub for Shimon Ito in the principal role created on Villella, and he came in with fire in his eyes (and in his red hair), perfect for the slightly slapdash athleticism and wonderfully connected to his partner in louche hip-thrusting, the delightfully risk-taking Taylor Naturkas. Adrienne Carter was interesting in the presiding-priestess role of a long-limbed woman pulled like taffy by four crouching, and definitely intimidated, fellas. The dancers I have seen in this role are usually taller, and icier; at first I wondered if Carter had enough strength of command. But as “Rubies” went on, her confidence grew, and the note of menace one usually feels was supplanted by sheer fun. Well, who could object to that in these tense days?

Only in “Diamonds” did MCB’s luster dim. It’s generally accepted that the grand corps choreography to Tchaikovsky’s third symphony here is blander than the other acts; the ballerina (Suzanne Farrell in the original) really has to carry the moment. Katia Carranza, though highly likeable, did not quite take us to the higher plane. She is getting on in her career (trained in Mexico, she joined MCB in 1998) and some tricky steps, like a sharp jump with a clear airborne second position before springing up into a pirouette, were simplified. Or maybe I have been too taken with recent performances by San Francisco Ballet dancers Sarah Van Patten and Sasha De Sola in this role; though very different, they each brought a sense of a private storyline to the ballroom drama playing out with their consorts. The chemistry here, too, was off. Carranza was warm, almost a girl-next-door; her partner Renan Cerdeiro not only stole the show with his grand pirouettes, but seemed self-contained. I did not quite believe his devotion to her, so what we had here amounted to two dancers showing tricks.

I don’t think Balanchine would have liked that, but I am far less an expert in his wishes than Lopez, who worked with Balanchine directly as a New York City Ballet member during the last nine years of his life. I like to think, though, that I could see her connection to him shining through the rest of this performance, which was coached by Merrill Ashley (“Emeralds” and “Diamonds”) and Bart Cook (“Rubies”). The dancers of today’s Miami City Ballet are open, honest, and in the moment. They left their Bay Area admirers rejuvenated.

Previous
Better to Dance Than Kill

Next
The Dancer and her Writing Life