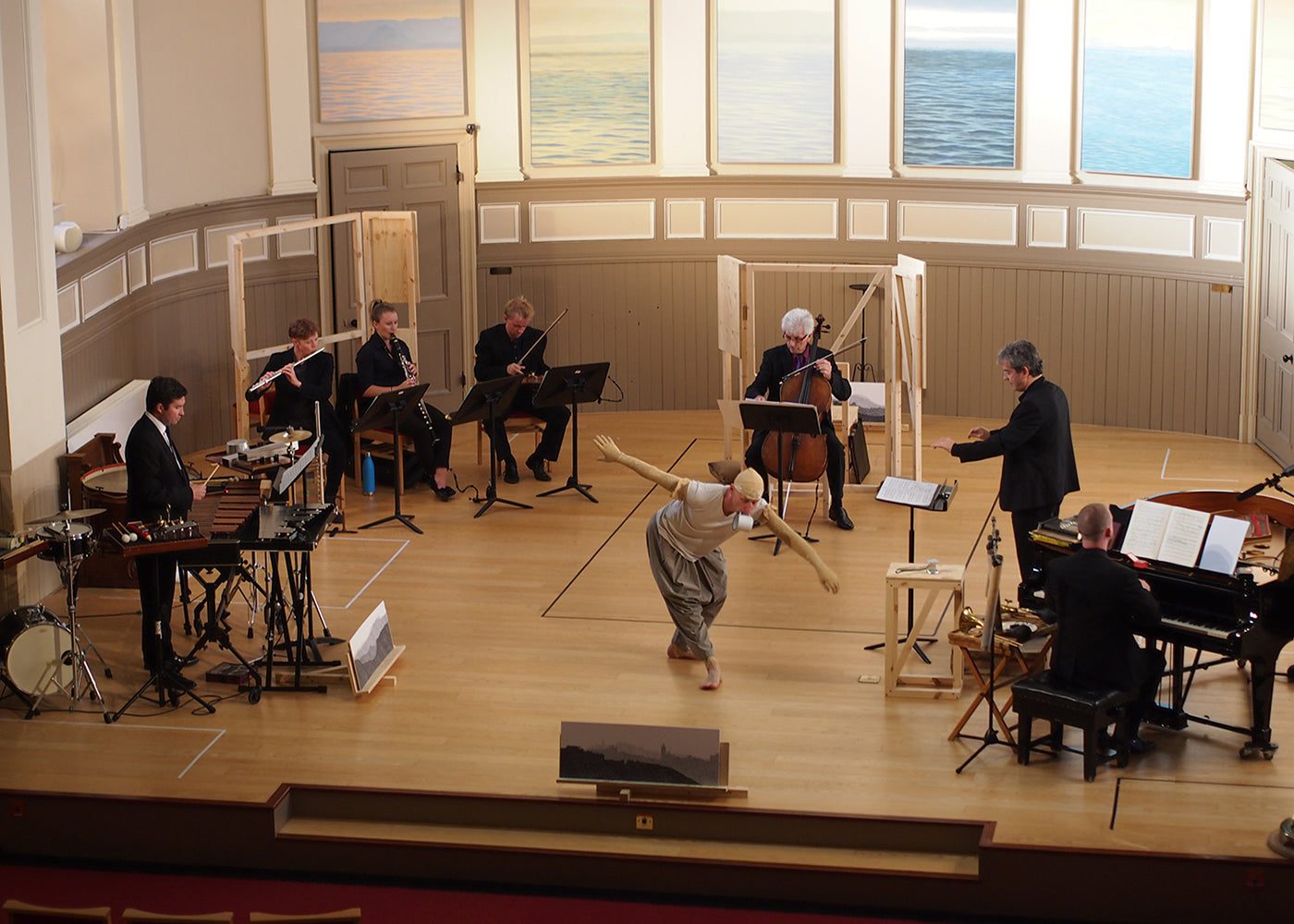 London-born dancer Matthew Hawkins has always been a singular force of nature, so it makes sense for him to collaborate with the iconoclastic Scottish musicians Red Note Ensemble and lithe, soulful French dancer Soraya Ham. For this film, Iconnotations, the setting is the beautiful Greyfriars Kirk in the “old town” side of Edinburgh, a spacious and ornate parish church. It has been previously performed in St. Magnus Cathedral in Orkney, the island where Maxwell Davies lived laterally. The main piece, Vesalii Icones, features a musical score from late English composer Peter Maxwell Davies from 1969, which is filled with so many musically capricious twists and turns that it takes a seasoned dancer like him to equal all of Maxwell Davies’ little genre-bending ideas.

But before that piece, he and Ham perform a short, loose, introductory routine born of improvisation called Do You Have Silence, a curio in which the pair respond to onomatopoeic language from Red Note, fusing sharp, very geometric undulations and metronomic swings together. It’s a nice foreshadowing of the work to come.

Vesalii Icones, a wildly inspired choreography from Hawkins, is very much a knotty, allegorical work, based on the 14 Stations of the Cross, and the series of 16th century anatomical drawings by Vesalius. These drawings are gorgeously homaged in large, finely detailed illustrations by artist Brian Hartley, and pored over by the duo in a large sketchbook.

Hawkins initially extends his whole large, robust form outwards from a crucifixion pose, into very controlled, minimalist steps. His movements can be as langorous as the percussion is staccato, before evolving into mimesis and deadpan playfulness, in which he wears trousers on his hands, before enveloping himself in them. Sometimes, he appears to flagellate himself like a martyr, is lost in contemplation, or simply stretches out like a sleepy, imperious feline. In other instances, he hides behind various musicians, such as the cellist Lionel Handy, or dons a wooden crate from Calum Duncan’s portable set. It’s like the disruption of ballet: maintaining the poise, but refusing to stay in one place for too long.

Hawkins and Ham’s dance, as with the music, constantly interrupts, refines, and redefines itself, an interrogation of process and arrival at fixed points. In one segment, there is a nod to music hall, although the jaunty rhythm is rendered ghostly through a sonic dissonance, as Hawkins flaps his arms, and shakes. There’s a slinky, honky tonk strut. Another moment has clockwork—like precision, not quite human: a natural response to a chaotic musical interlude.

For all of the ensemble’s little quirks—a cheese grater and typewriter become instruments used in solos—there is nothing contrived or wacky in the performance, as the sounds (thunderous brass, crackling, music box twinkles) seem perfectly integrated with the restless movement and use of artworks, on occasion held up like evidence. Thus, the visual and aural are a perfect pairing. Maxwell Davies would have approved.

Violent bursts of music give way to more soft parts, and measured, contemplative strides from the pair. What is so striking is that the piece feels almost improvised, because of the instinctive, effortless way both dancers move, as well as the relaxed, non-linear structure—however, it soon becomes apparent that there is a pleasing symmetry to Hawkins’ choreography, with repeated patterns, gestures and motifs which start to reveal themselves more as the film progresses. A curved arm and pointed fingers start to become lyrical lines like a sonnet, gaining in impact with each reiteration.

Patience is its own reward—this is not dance that leads you by the hand—rather, it’s full of unexpected mood swings: it can be poignant, witty and intense. Simply let it take you down strange meandering roads and zig-zagging paths, and you will fall into worlds within a world.

Next
The Rise of Frances Rings