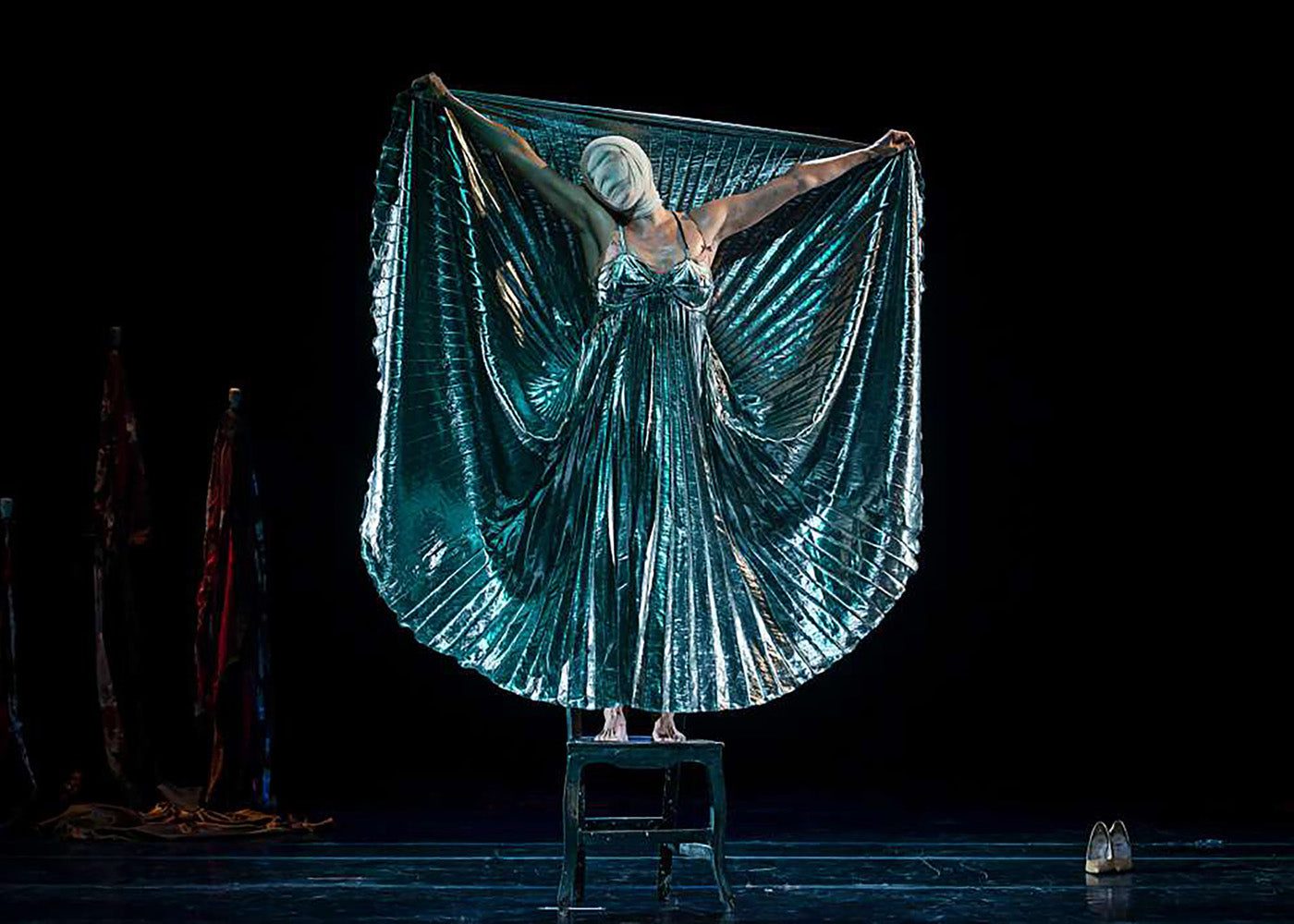 Who is Marta Carrasco? Her bio says that she’s a “celebrated Catalan artist who moves between theater, dance and the visual arts as a performer, dancer, choreographer and director.” She also formed her own company in 1995 and has taken home a fistful of awards, including the National Dance Prize of Catalonia and several Max awards. But in what was billed as Carrasco’s farewell performance at Los Angeles Theatre Center, in a mind-blowing 11-day run presented by the Latino Theater Company, Carrasco delivered a gut-punch to the soul in her never less than astonishing, “Perra de Nadie.”

Translated as “Nobody’s Bitch,” this one-hour solo managed to live up to its title, no matter the obtuseness of the situation, with comedy, silent screams and downright horror, all on unabashed, unforgiving, yet glorious, view. As Barcelona-based Carrasco, who recently turned 58 and also created the piece, donned a number of costumes (designed by Pau Fernández i Cía and Carrasco), she embodied an array of characters she’d honed over the years.

Indeed, there was Lili, the so-called bitch supreme who was last seen at REDCAT in “B. Flowers,” from 2013; from her “Aiguardent” (“Firewater”), Carrasco reincarnated Violeta, her 1995 portrait of an alcoholic that she performed at the Ford Amphitheatre in 2003, which earned her Spain’s top prize for best female performance. In addition, Carrasco portrayed the French sculptor Camille Claudel, from the artist’s 1997 “Blanc d’ombra” (“White in the Shadow”), which had its U.S. premiere in 2004, also at the Ford.

If this seems like a lot to take in, it was—in both shocking and satisfying ways. Entering to the Joni Mitchel classic, “Both Sides Now,” Carrasco greeted the audience with a wry smile and outstretched hands, even moving through the aisles to communicate her welcoming presence. But dressed in a kind of layered muslin dress, replete with wrist and neck braces, was she a smiling gamin, a captive bride or merely an old woman?

It mattered not, with her spinning recalling a transcendent Sufi and her bare, arched feet a nod to her dance inspirations Martha Graham, Mary Wigman and Pina Bausch. Indeed, Carrasco’s mindset decidedly bends towards the darkness and flaws of humanity, with the artist stating: “Someone may have noticed, and rightly so, that the dog is one of the first domestic animals, which was very useful for hunting. But a bitch, if it belongs to no one, is good for nothing, or for anyone. Well, they do exist, yes! What’s more, they are essential in their uselessness . . . There, in the depths of each one of you, in that underworld of vulnerability, madness, tenderness and pure fragility, live Lili and her night watchmen.”

Segueing into the Habanera from Bizet’s “Carmen”—“L’amour est un oiseau rebelle (Love is a wild bird that no one can tame)”—Carrasco laughed wildly, her arms fluttering like an excited avian while also slapping her thighs. She then sat cross-legged on a small table (set design, by Carrasco, also included a chair, a rack of clothes and a long piece of fabric that resembled a river of blood).

Caressing herself, this fearless artist soon took a sinister turn by wielding an ominous looking dagger to the sounds of Nat King Cole’s “L-O-V-E.” I mean, really! From this potential act of murdering an unseen subject (the audience?), to, perhaps, committing hari-kari, Carrasco began twirling a ribbon as if a rhythmic gymnastics contender, now to the strains of “Ave Maria.”

Yes, this was religion, ritual, rebirth, as she donned a gold satin gown, her arms outstretched in crucifixion mode. Managing, then, to lie prone on this tiny desk/table, she crossed herself before becoming one with the floor, i.e., lying face down, spasmodically, no less. Returning to the chair, Carrasco finally collapsed across the table and shed the gold threads.

But there was plenty more to come: With clothes making the woman, or Carrasco making the case for yet another costume change, she slipped into a stunning, pleated silver lamé frock that might find Issey Miyake envious, after which she began wrapping her face in surgical gauze: Scary, but somewhat sacred (a mummification thing?), Carrasco performed to a soundtrack that featured either a boy soprano or countertenor, possibly in a work by Handel or Purcell (the program didn’t list the music tracks). With her many guises multiplying, the artist could have been a prisoner or an S & M participant, willing—or not—in this dance of doom.

Moving back to the chair yet again, she spread her arms like a butterfly emerging from a cocoon —or was her encased face akin to a plastic surgery procedure gone awry? Gripping her head while wailing and crying, Carrasco had no choice but to unravel the gauze, executing an empathic backbend and eventually slipping out of the gown to curl up on the table’s surface.

Sounds of thunder and a barking dog then permeated the theater, as our protagonist returned to the muslin garb, but now maneuvering to disco music and somehow looking like a, well, dancing nun. This elicited a huge round of applause before Carrasco draped her now nearly nude body in the aforementioned red cloth (shades of Christo?). Was it agony, ecstasy, or both, as her hands emerged triumphant from the fabric, fingers splayed.

Then the denouement: Carrasco, smearing her face with a creamy white substance, her visage demonesque, continued to slather the stuff on her bare breasts and torso (move over, Karen Finley!). Then, Carrasco as statue, albeit one on the move, came toward us before retreating, again, to the rack of clothes, her characters hanging there, limp, their tales now lodged in collective memory.

Privileged to witness one of Carrasco’s farewell performances—though she’ll continue to direct and choreograph—this writer left the theater, bedazzled, and in a heightened state of gratitude, awareness and awe. Muchas gracias, then, Ms. Carrasco, long may you create.

Next
Everything Everywhere All at Once