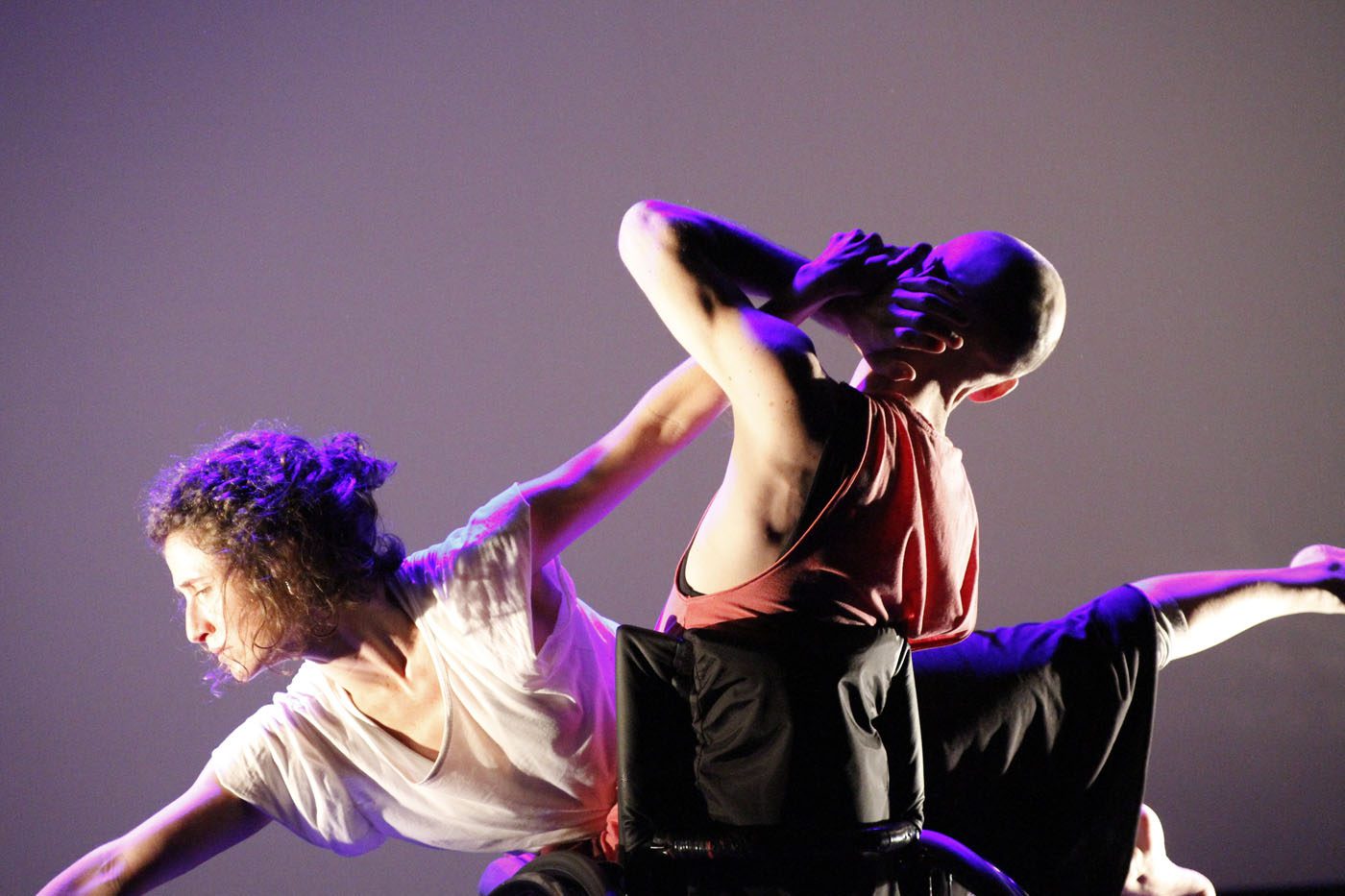 The Possibilities of Love

Fragile, delicate things must be handled with great care. So it is with choreographer/dancer Marc Brew’s “MayBe,” conceived and directed by Natália Mallo in collaboration with him. It is a thing of profound beauty.

Based on Zygmunt Bauman’s modern philosophy of ‘liquid relationships,’ which postulates that in contemporary society our fixed ties of love are loosening, and our need to be free strains against our need to love and be loved, the choreography explores this seemingly interminable paradox with enormous skill and clarity. This is less abstracted than some of Brew’s work; more theatrical and lineal.

To an electro pulse, moodily lit by Mirella Brandi, blue-clad Australian dancer Brew emerges from the dark in his wheelchair, circling around Brazilian dancer Gisele Calazans, who is undulating and flexing in a red dress. They are like sexy ravers in a nightclub, completely euphoric, lost in the moment. As they become aware of each other’s movement, they are head to head and they start to flow together. Soon, they are sharing and emulating the same staccato rhythms played by the live band—composer Mallo, pianist Edward Cohen and drummer Liam Chapman—which turn outwards, evolving into a beautiful cinematic score.

The vagaries of love, sex and rejection are now laid bare—Brew and Calazans tumble and slide over and through each other, Brew is carried on Calazans’ back and they engage in foreplay-like movement, crawling around each other and ‘melting’ as though sharing one body. They appear oblivious to everything else, as only new lovers are. It feels almost voyeuristic to watch such levels of intimacy. An audio clip of Marc provides a wry counterpoint to the choreography, he speaks of the humiliation in his teen years of saying he loved his girlfriend because that’s what characters in Neighbours and Home and Away said, and the girl just laughed at him. The duo wriggle and writhe on the floor, stroke and caress, and chase each other, before fighting and breaking apart. Calazans abruptly backs away, rebuffing Brew’s advances. If love is a dance, the steps are now forgotten, and both must be solo, positioned either side of the stage. The audio description goes into the inner monologues of each, with Calazans twisting her body, aggressive and tormented, and Brew flailing and fist pumping as he lies prone on the floor displays the pain of separation. Both are as vulnerable in their own way, aching to reconnect.

There is great power too in Mallo’s Portugese sign language and gorgeous singing. She steps to the front and performs an emotional cover of Suely Mesquita and Glauco Lourenço’s “Realejo,” which explores the many strands of love-from platonic to ‘supersonic,’ passionate love. A black and white clip from Italian film maestro Antonioni’s La Notte appears on the screen at the back: two lovers in evening dress with their backs turned to the camera walking away. They share the same space, but seemingly are out of synch emotionally, as with Brew and Calazans’ bitter ‘break-up.’

Eventually, the dancers reconvene. Brew is first soothed by Calazans, who with an embrace and a stroke of his head calms him down. He lifts a stretched-out Calazans above him like a goddess and spins her round. She stands on his shoulders, staring imperiously out like a statue. A slowed-down version of K. D. Lang’s “Maybe” plays: “Maybe I am crazy/ maybe I am confused/ maybe I have misconstrued.” It asks the tentative questions of those first complex navigations into romantic entanglements, and the light is focused only on Brew and Calazans, now curled up around each other on the floor as one, ready to start again.

The red eyes in the audience say it all. It is simply devastating.

Next
The Allure of Nijinsky