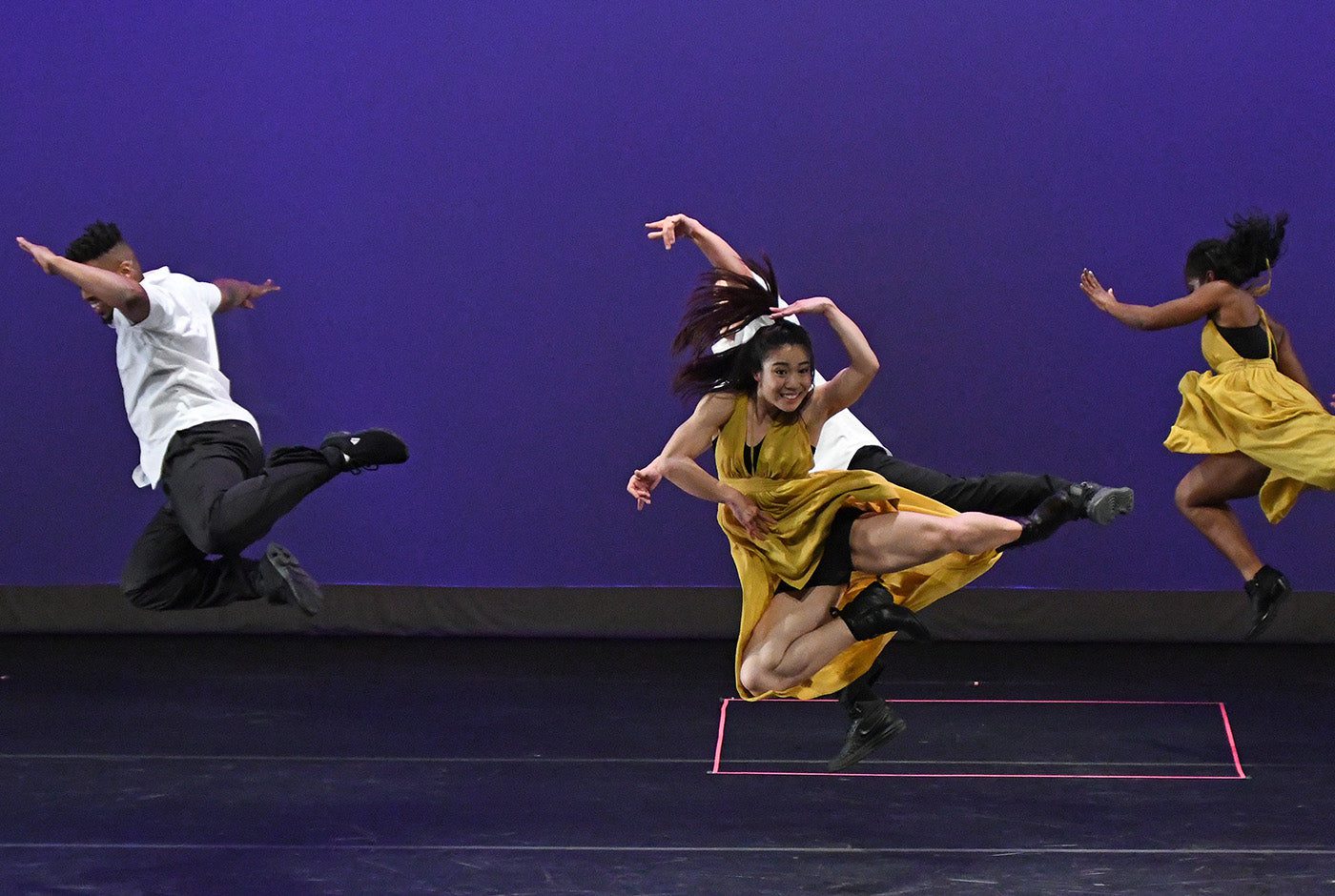 Black History Month was ushered in with a bang when members of Lula Washington Dance Theatre shredded the stage—in a good way—at the Wallis Annenberg Center for the Performing arts last weekend. At least technically speaking, as the 10 exceptional performers proved indefatigable, joyous and a solid reason to continue to support the art form that celebrates the body in motion—in this case, from an African-American perspective.

And another reason to celebrate? The troupe turns 40—yes, 40—this year, having been co-founded by husband and wife team Lula and Erwin Washington way back in 1980! Kudos to the couple, then, who is also observing a half-century of marriage, their stamina, determination and role as stalwart keepers of the Los Angeles dance flame attesting to a shining example of terpsichorean fortitude.

And while the programming, which included two world premieres, a West Coast premiere and a joyous rebooted finale, could have used some judicious trimming, the company’s mix of jazz, hip-hop, African movement, ballet, modern, tap and other dance styles (what, no Bollywood?), the evening demonstrated the power of the human spirit.

Opening with “Hands Up: A Testimony,” by Tommie Waheed Evans and set to the taped and very loud music of Michael Mindingall & [his gospel choir] Communion, the work, according to the press release, focused on the choreographer’s “experience growing up in Los Angeles and what it meant to him to be a product of that city.”

More a praise dance—a means of worshipping the lord by expressing devotion and reverence through movement—than a cohesive choreography, the four women and one male—Quron Clarks—deployed fine unisons, backward hops and plenty of lunging and strutting. What was missing, though, were lifts and human connections, as each dancer seemed in their own world in this Hullabaloo/Love-In-like show of swingy hair and bell-bottoms (the drab maroon and black costumes were uncredited).

With its overwrought soundtrack (shouts of “Hallelujah” and “Jesus” were threaded throughout the score), served to exacerbate the freneticism of the dance, which included an unnecessary coda that was possibly inspired by Alvin Ailey’s masterpiece, “Revelations,” but which merely tacked on several minutes to an already overly long number.

The other new work, “To Lula with Love/Warrior,” created by former Ailey dancer Christopher Huggins in honor of the troupe’s anniversary, was a ritualistic romp accented by a rhythmically propulsive score (heard on tape) featuring Kodo on Japanese taiko drums and Steven Ellison, known professionally as Flying Lotus.

Again punctuated by numerous unisons, the piece also made use of high-flying jumps and acrobatic barrel turns, with the 10 knee-pad wearing dancers a tribe in their own right. Martial arts-infused moves included some break dancing, ground-rolling and one-arm cartwheels. At times the dance veered into Diavolo|Architecture in Motion territory—but without the signature structures that the L.A.-based troupe (it appears at the Wallis in May) employs so effectively.

A walk-on by the ceremonially-garbed Lula Washington at the beginning and end of “To Lula,” bestowed her with Goddess-like stature, which she has decidedly earned from both her dancers and the community.

Washington’s choreography, on the other hand, leans towards message-bludgeoning, something that proved fatal in her “Fragments,” billed as “Excerpts 2017-2020 Sneak Preview/Premiere.” A noted teacher, activist and community builder, Washington has not made dancemaking her strong suit. And when performers came out and began muttering words including “Mueller,” “Bolton” and other triggering monikers, one had a feeling that this would be a rough ride.

Yes, these are divisive and frightening times (Trump’s impeachment trial, some would say, is an ongoing farce of the highest order), but to be pummeled with platitudes, spoken word and voice-overs reminding us of racial inequalities, the need to get woke and oppression—all to the music of Sun Ra, Marcus L. Miller and Nipsey Hussle—this dance suffered from overkill. Also featuring Lula’s daughter, Tamica Washington-Miller, who resembled a young Jessye Norman, beseeching the audience to shout out names of recently departed souls.

It was no surprise that the death of Kobe Bryant was invoked, as well as Harriet Tubman, Shirley Chisolm and other notable African-Americans. But there is a time and place for politics, albeit even in a dance, and while the performers, including Joniece Boykins, Ongelle Johnson, Kozue Kasahara and Danny Guerra, comported themselves with ferocity and grace, also exhibiting split-leg leaps, deep backbends and the occasional cabriole, did the audience really need to be reminded to vote? This scenario played out while snippets from “Le Marseillaise” and “Love Is All You Need” were heard, with Washington-Miller, in distinct non-Jessye Norman mode, crooned an original song “conceived by Lula Washington,” which proved to be a tra-la-la-la-ing plea for peace.

Fine, we get it, but with Washington’s program notes also acknowledging that the work is “my personal attempt at maintaining my sanity in a world that seems increasingly insane”—and collective white guilt coursed through the well-heeled Beverly Hills crowd in attendance—this extended screed/riff/call-and-response opus rambled on for a very long 25 minutes.

Esie Mensah’s 2018 work, “Zayo” a West Coast premiere, did manage to offer a showcase for Boykins, though, as a woman challenged by forces known and unknown. Nightmarish on occasion, the work also featured dancers stomping with sticks (or, as Lizzo might rap, “I’m 100% that bitch”) as a brutal scenario played out, ending in Boykins screaming for her life. To wit, “Zayo” more like another movement diatribe, left a queasy aftertaste, or as dance critic Arlene Croce titled one of her books, Afterimages, but not necessarily pleasing.

On a far happier note, though, was Rennie Harris’ “Reign.” Originally made in 2010 for the company’s 30th anniversary and updated in 2018, the piece closed the program with a seriously upbeat, physically magnificent work of art. A fusion of hip-hop and modern dance, it featured the entire company, including Martez McKinsy, Jack Virga-Hall, Joshua Alexander, Tehran Dixon and Michael Tomlin, III, a powerful dancer who had appeared earlier in the evening in “King” an excerpt from Washington’s “The Movement,” dedicated to the legacy of the late Martin Luther King, Jr.

Apprentices Courtney Gaffney and Glen Rodriguez added to the collective sizzle of the Harris work that teemed with cool moves akin to moon walking, bits of popping and locking and shades of a Russian Hopak dance. There was also an homage to Ailey’s “Revelations” via his “Move, Members, Move” section set in a church. This number was exuberance squared, giving the evening a boost of much needed optimism. Let’s raise our glasses, then, to Lula Washington Dance Theatre and wish them well for another 40 years.