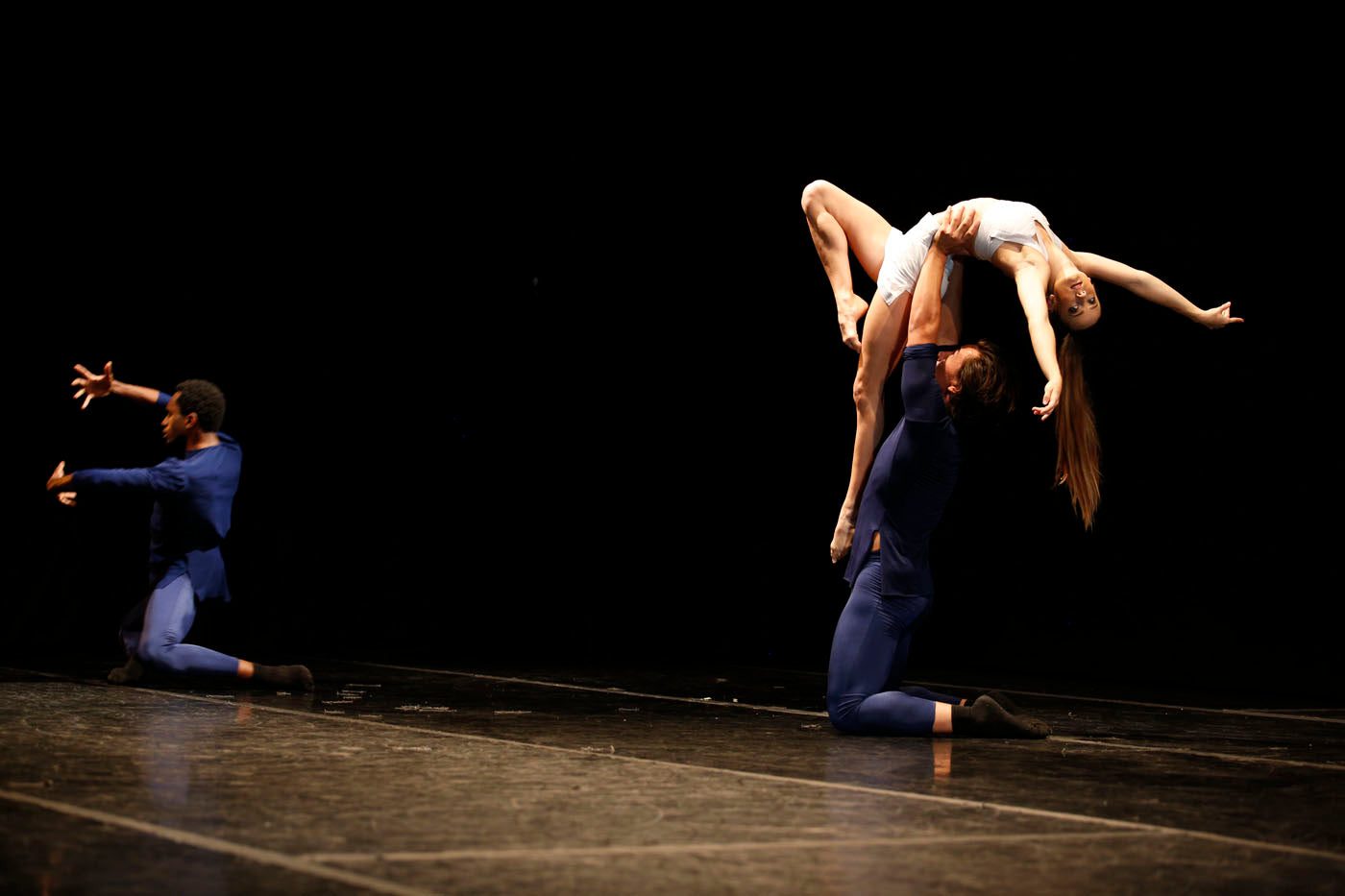 Celebrating the contemporary dance community in the City of Angels, the indefatigable Deborah Brockus has mounted her latest iteration of the LA Dance Festival since founding it in 2012. Bringing together 28 troupes over four nights (with nine separate performances)—as well as offering classes—Brockus has been producing events like these for years, including the Spectrum Dance in LA series, which received a Lester Horton award for “Outstanding Production of a Festival or Series” back in 2002.

This festival opener featured four companies and a post-performance party where everyone, including dancers, choreographers, presenters, agents, patrons and dance lovers could schmooze, drink and eat while listening to live music by Nora Francesca Germain and friends.

With so many artists on each evening’s bill, the festival provides a kind of terpsichorean tasting menu, which is both a good and bad thing: good, because if a troupe fails to pass muster, another one soon comes along; bad, because too many companies tend to become a blur.

The kick-off featured the former, with Ate9 Dance Company, founded in 2012 by Gaga guru/choreographer, Danielle Agami (she danced with Batsheva Dance Company for eight years), moving up a storm to the sounds of Regis’ “Manbait,” a full-throttle electronica score that provided propulsive beats. The award-winning Agami, a stunning dancer in her own right, sat this one out, though, allowing six hoofers to prove their mettle with one-legged balancing postures, major extensions and a fierce floor-rolling sequence.

Frenetic and fun, the work, “Something New,” was the longest piece of the night, but, at about 20 minutes, it meandered. It also featured more false endings than a Beethoven symphony. In truth, “New,” seemed less novel, and more a mash-up of Agami’s greatest hits, including “Mouth To Mouth” and “EXHIBITa,” but succeeded, for the most part, by dint of the dancers’ determination, skills and commitment.

Witnessing same can be an end unto itself: It’s always a pleasure watching Thibaut Eiferman leap, gazelle-like, and Rebecah Goldstone executing solid, quasi-arabesque poses. The dancers are precise studies in control, even as they hopped, crawled and lunged to Regis’ incessant rhythms. There was little partnering, save for a blatant kiss/hug/caress between Yasmin Mahmoud and Genna Moroni, when the lip-locked duo was perched on the floor.

There were also unisons galore, and the requisite vacant stares while marching in lock step, which gave a whiff of mechanization to an already-charged movement vocabulary. The stylizations associated with Gaga coursed through the number, the quirk/cum/alien factor also rendered by Ariana Daub, Sarah Butler and Gary Reagan. A neo-soft shoe, albeit done shoeless, amused near the work’s true finale.

On a smaller scale: The Union Project Dance Company, founded in 2009 by Mariana Oliveira, presented a duet, “Between 4 Walls,” choreographed by Oliveira and performed by Micaela De Pauli and Trevor Downey. Set to music by Philip Glass (will dancemakers ever tire of using pieces from the now 79-year old’s massive oeuvre?), the work was based on playwright Terence Rattigan’s The Deep Blue Sea. From 1952, the play details a woman’s attempted suicide resulting from her lover leaving her.

This is a tall order, to be sure, especially when forged in a rather short dance. Making use of a piano bench and inexplicable finger-to-mouth motifs, the performers, clad in unflattering garb by SHE couture and Oliveira (a short satiny black dress with a Peter Pan collar and longish sleeves for her; suspenders and undershirt with dark trousers for him), looked like a Pennsylvania Amish couple, something out of Grant Wood’s American Gothic, or Über Goth Gothic, considering De Pauli’s funereal frock.

Teeming with overhead lifts, many of them split-legged, the dance was angsty (silent, open-mouthed screams), but, ultimately, aimless. Downey is strong and purposeful—his quarter turns, balances and partner prowess commendable—but the piece less so. Whether draped over the bench or sharing it with him, De Pauli was more an object to be dragged, tossed or exhibited. At one point she resembled a hood ornament being hoisted above Downey’s head, not a woman trying to overcome shattering loss.

Loss was nowhere to be found in Wax/Wane’s “Banga,” unless one is looking, in vain, for intention or meaning and coming up short. Choreographed by Andrew Winghart, this opus may have hewn to the adage, “safety in numbers,” as there were nine performers, but there was little cohesion to the choreography, no matter how safe. But there was much unison arm-flailing (recurring windmill gestures), walking, running in place and jumping to assaultive music by Baauer and M.I.A.

The costumes—uncredited and unflattering (black leotards and leggings, with the two males bare-chested)—did not help. And there was little variation in movement, an occasional gambol and hop notwithstanding. Sandwiched between the group gaggling, however, was a solo, well executed, by Alyssa Allen. It’s too bad that she had very little to do except slice the air with, yes, her arms—fingers sometimes splayed—flaunt some off-kilter posing and run in place.

Three dancers from BrockusRED opened the show with “Connect,” choreographed by Brockus and the performers, Isaac Huerta, Raymond Ejiofor and Holly Leonard. Unfortunately, this reviewer arrived late (Los Angeles traffic during rush hour: grrr), and only caught the last half of what looked to be an emotional and vigorous work, set to the music of Jack Tweddell.

Many other troupes are slated for the festival’s duration, including Pennington Dance Group, Lula Washington Dance Theatre and lollieworks, proving that SoCal dance is alive and well, thank you very much. Kudos, then, go to Deborah Brockus, an avid and intelligent producer, for giving local dance a well-deserved platform.

Previous
Into the Burrow