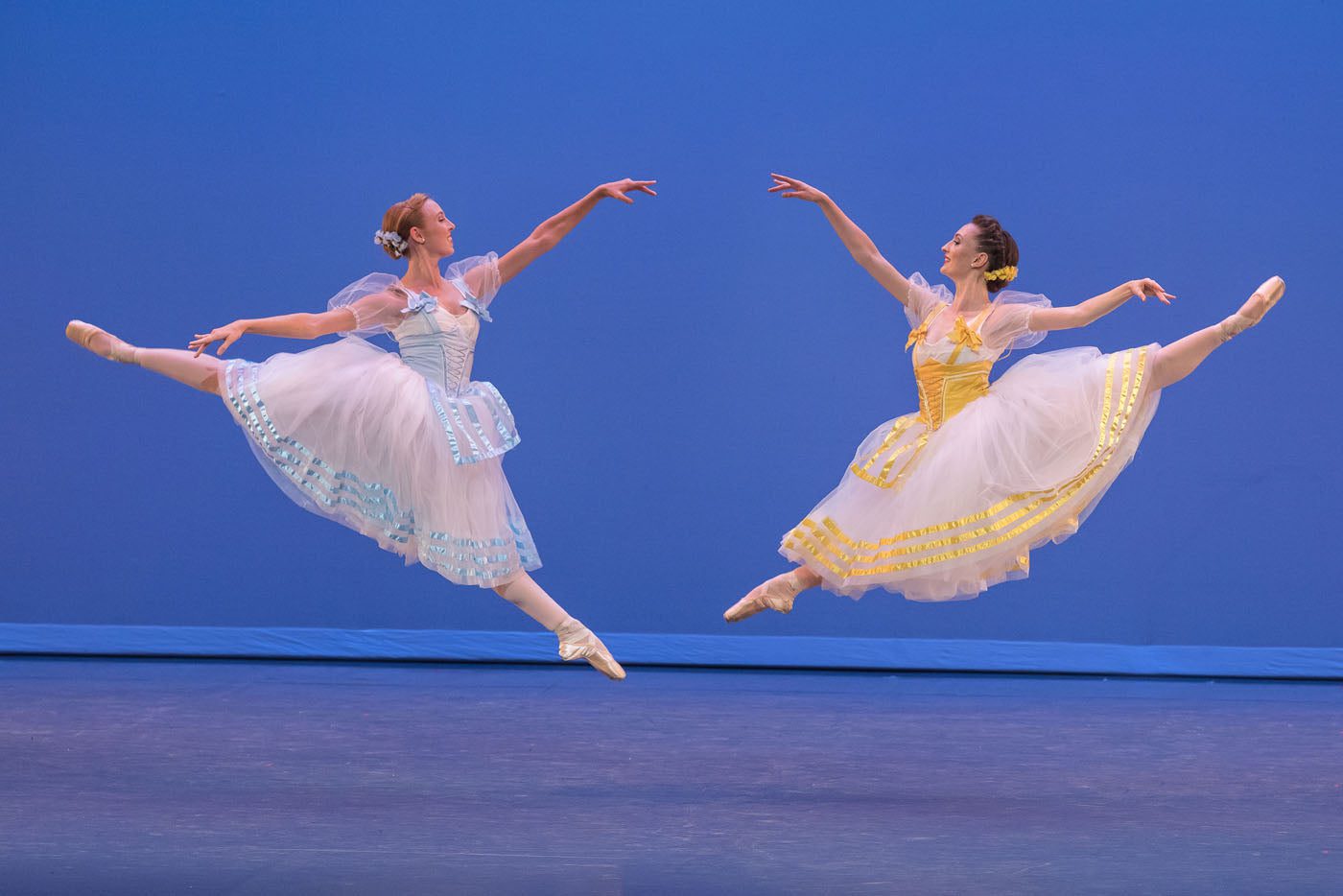 A Russian, a Dane and a Canadian—all choreographers—may never have walked into a bar together, but their works made for a magnificently diverse program presented by Los Angeles Ballet to kick off the troupe’s 11th season. The three dancemakers, George Balanchine, August Bournonville and Aszure Barton, represent three distinct styles, and showcased the company’s commitment to preservation as well as being cleverly hip in the moment.

Credit the company’s co-directors, the husband and wife team of Thordal Christensen, he of the Royal Danish Ballet, and Colleen Neary, she of New York City Ballet, with making the art form relevant—and necessary—in these often chaotic times. The brilliant, hyper-stylized program opener, “Stravinsky Violin Concerto,” originally choreographed in 1972, was staged by Neary, a Balanchine répétiteur, with an eye towards detail.

Here is Balanchine unplugged—or perhaps overamped, depending on one’s viewpoint—with the Stravinsky score a stew of polyrhythms, wildly dissonant chords and playful pizzicatos, the dancers offering leaps, backbends and sly haughtiness. Framed around two duets (“Aria I” and “Aria II”), with sixteen corps dancers, all reveling in the possibilities of asymmetrical spatial patterns and angled thrusts, the work was performed with an assured determination.

The first duet, with Elizabeth Claire Walker (stepping in for an injured Allyssa Bross) and Dustin True, could be subtitled “Arachnid,” the spidery moves delicious and  sexy, also recalling those monumental steel sculptures by Louise Bourgeois. The second, more lyrical, i.e., slithery, pas de deux, with the elegant Julia Cinquemani and a sure-footed Kenta Shimizu was no less compelling, especially in its poignancy, the two couples embodying the music with certifiable aplomb.

The joyful finale, a series of stylized Russian folk dances featuring folded arms and hands on hips, had the cast in rigorous unison mode, the speed quotient a testament to the troupe’s can-do attitude and dedication to craft.

These factors were also in play in Aszure Barton’s “Untouched,” made in 2010 for Hubbard Street Dance Chicago and new to L.A. Ballet this season. Barton has been touted as one of choreography’s “It” girls (would that there were more, please), and in this theatrical work, set to the moody piano/string music of Njo Kong Kie, Curtis Macdonald and Lev “Ljova” Zhurbin, she made use of a dozen dancers, individualizing them in quirky and surprising ways.

Entering and exiting through a drawn red curtain amid hazy lighting (both designed by Nicole Pearce), the performers, sporting Fritz Masten’s flowery prints (velvet dresses for the gals, shirts and slacks for the men), seemed isolated, locked in a world of dreamy longing and shattered hopes.

The melodramatic feel to the dance was also accented by the sometimes exaggerated vocabulary —six o’clock extensions, swooping arms and deep pliés. A lovely Chelsea Paige Johnston was Grahamesque in her elongated moves, her feet a study in articulation. A twitchy fluidity also prevailed, a stomach-rubbing gesture, pain manifest, as this somber and circumspect gathering proved unable to forge connections in meaningful ways.

Yes, there were mini-power struggles and the occasional snuggle, but “Untouched,” with other notable performers including Leah McCall, Bianca Bulle, Joshua Brown, Walker and True, lived up to its title.

In a total course reversal, L.A. Ballet ended its eclectic program with excerpts from the marvelously upbeat, albeit fiendishly difficult, “Napoli,” choreographed by Bournonville in 1842.  Tackling the “Pas de Six,” among others, were Javier Moya Romero (dancing for an injured Tigran Sargsyan), Kate Highstrete, Madeline Houk, Ashley Millar, Bulle, True and Cinquemani.

The style is characterized by fast footwork (hummingbird-like beating feet with small jumps), graceful épaulment and details found in every part of the body, such as rounded, evenly held arms. But make no mistake, Bournonville’s language is both astonishingly complex and modern, with the LAB dancers engaged in full-throttle happiness.

And one reason Bournonville continues to please and fascinate, is that his choreography makes jubilation a study in infinite variations, with beaming dancers executing thorny, quicksilver steps one moment, a single, simpler step the next. Here were Millar and Cinquemani matching each other in lofty jumps, Romero and Houk comporting themselves as if to the Danish manor born. Shimizu also tossed off dazzling pirouettes, with Bulle delighting in her variation.

The “Tarantella,” replete with beribboned tambourines, is festive and fabulous, with Alyssa Harrington and Marc LaPierre displaying fine form in their duet, and the complete cast going for, well, balletic broke. With this disparate but highly engaging program, Los Angeles Ballet continues to be a standard bearer for fine, homegrown dance in the City of Angels.

Previous
The Conduct Of A Person