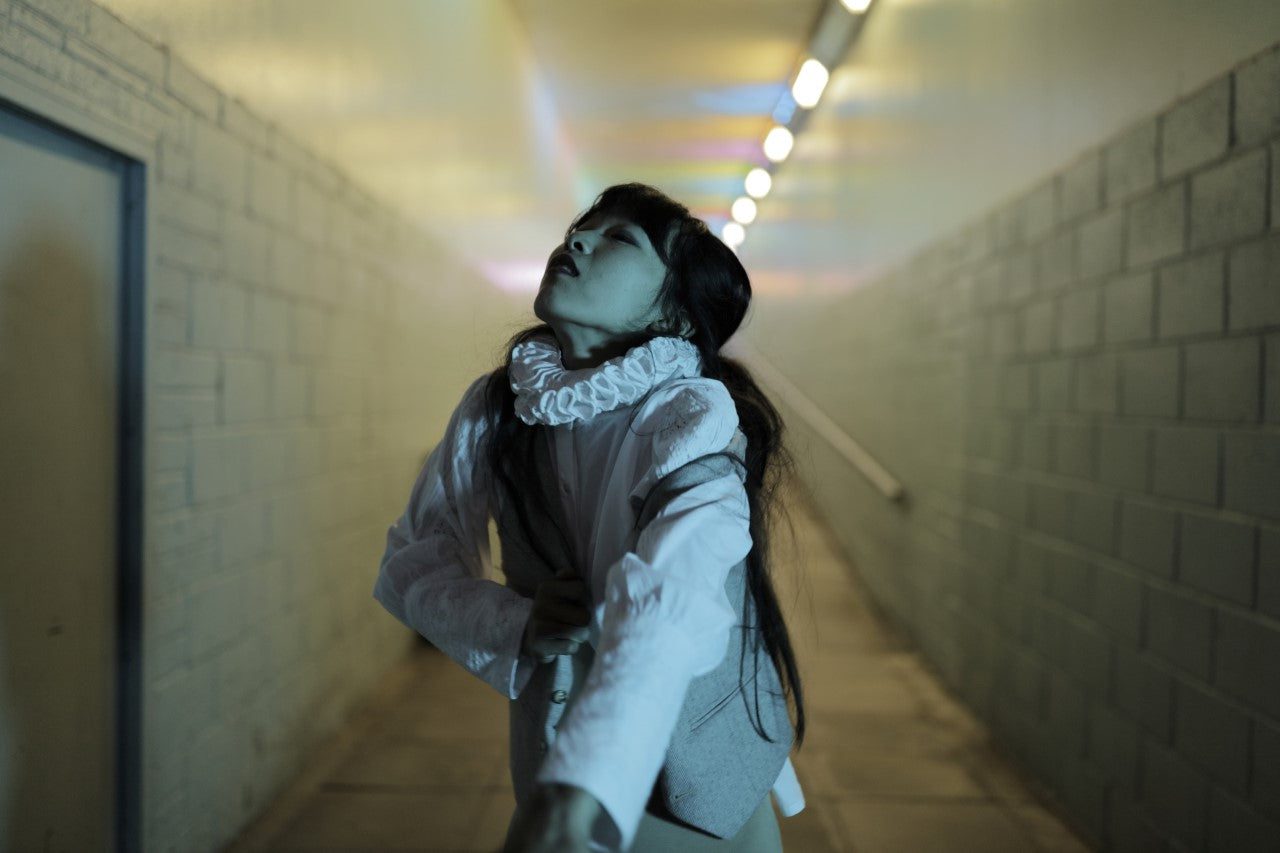 Wilful, bold Rosalind—the heroine of Shakespeare’s As You Like It—who dressed as Ganymede the man, always eschewed traditional tropes of female behaviour in literature, so James Cousins Company’s re-imagining of her in this incredible piece seems timely, as gendered issues—whether of feminist or transgender visibility—are increasingly pushed into the mainstream media and news. His company, featuring British and Korean dancers, are effectively loosening the corset strings of Shakespeare for a new generation. And how!

In a cube construction built by Joe Hornsby, fizzing into neon life, Rosalind and her double (the extraordinary Chihiro Kawasaki and Heejung Kim) in flesh hued corsets and soft shorts, mirror each other’s slow feline stretches and clean modernist lines. Once freed, as with a kind of pubescent sexual awakening, they move more confidently, and are joined by the male duo (Georges Hann and Inho Cho) representing Rosalind’s lover Orlando and various facets of masculinity. Together, they tangle limbs with them in a kind of pansexual rave, pulsing to Seymour Milton’s sexy, ricocheting guitar-based electro. All wear egalitarian tailored suits of grey, navy and white.

What follows blurs not only gender, but the push and pull of romantic love, underscored by gestures towards masochism and sadism. Every scene is different, representing the vagaries of desire. Rosalind is never a submissive women, although she is at a couple of points pushed and pulled by the men like playground bullying; it’s tough to watch, we hear her cries of resistance and laboured panting. But the men attack and claw at each other too—bodies in motion are symbolic of a struggle for dominance. The movements come in short sharp bursts, constantly fluid. The sense of oppression and restraint mean the dancers cling in one unit and rarely solo off, suggesting a collective claustrophobia. In suits, the quartet seem like Shaolin warriors, with fists clenched and coats flapping. In slow-motion, they seem to fly in mid-air, or acrobatically tumble, like actors in a martial arts film by John Woo. It’s a bewildering and jaw-dropping display of pure precision.

But it’s not all brutal. Orlando softens, as Rosalind grows stronger: she gets the love she seeks; he becomes more loving around her. The quartet lift and carry one another, torn between childish impulses and adult responses. “All love is a lunacy,” murmurs Jasmine Blackborow’s voiceover penned by poet Sabrina Mahfouz, as soporific as the action is energetic. They are now poised as forest scavengers, busy hands foraging for sustenance as much as seeking adoration. Ella Fitzgerald’s “You Don’t Know My Mind” wraps around a playful loose-hipped swagger, with Bob Fosse like shoulders and finger clicks. Rosalind has reached womanhood, and the apparitions of fear are all in the past.

Kawasaki and Kim, now alone in the cube together, do an astonishing acrobatic tease, where, up on each other’s shoulders, they endlessly take off coats and dresses, then put them back on, all the while, flipping over each other like acrobatic Victorian toys on climbing bars. It’s almost like a Burlesque routine, and incredibly dizzying in its frenetic execution—impossible to see the joins.

The narrative at times does becomes a little abstracted. which is both a blessing and a curse (Who is Rosalind now? Where are the characters heading?). It isn’t always made clear, but open to interpretation; yet Cousins’ stunning erotic choreography more than makes up for it. Part of the delight of the performance is putting the puzzle pieces together, seeing what sticks, and reading into the dreamlike qualities as you see fit. With all of the boundaries so hazily defined, Cousins’ work is left to say so much, and the dancers’ vocabulary is universal- love and desire is understood by all. The Bard will never be quite the same again.