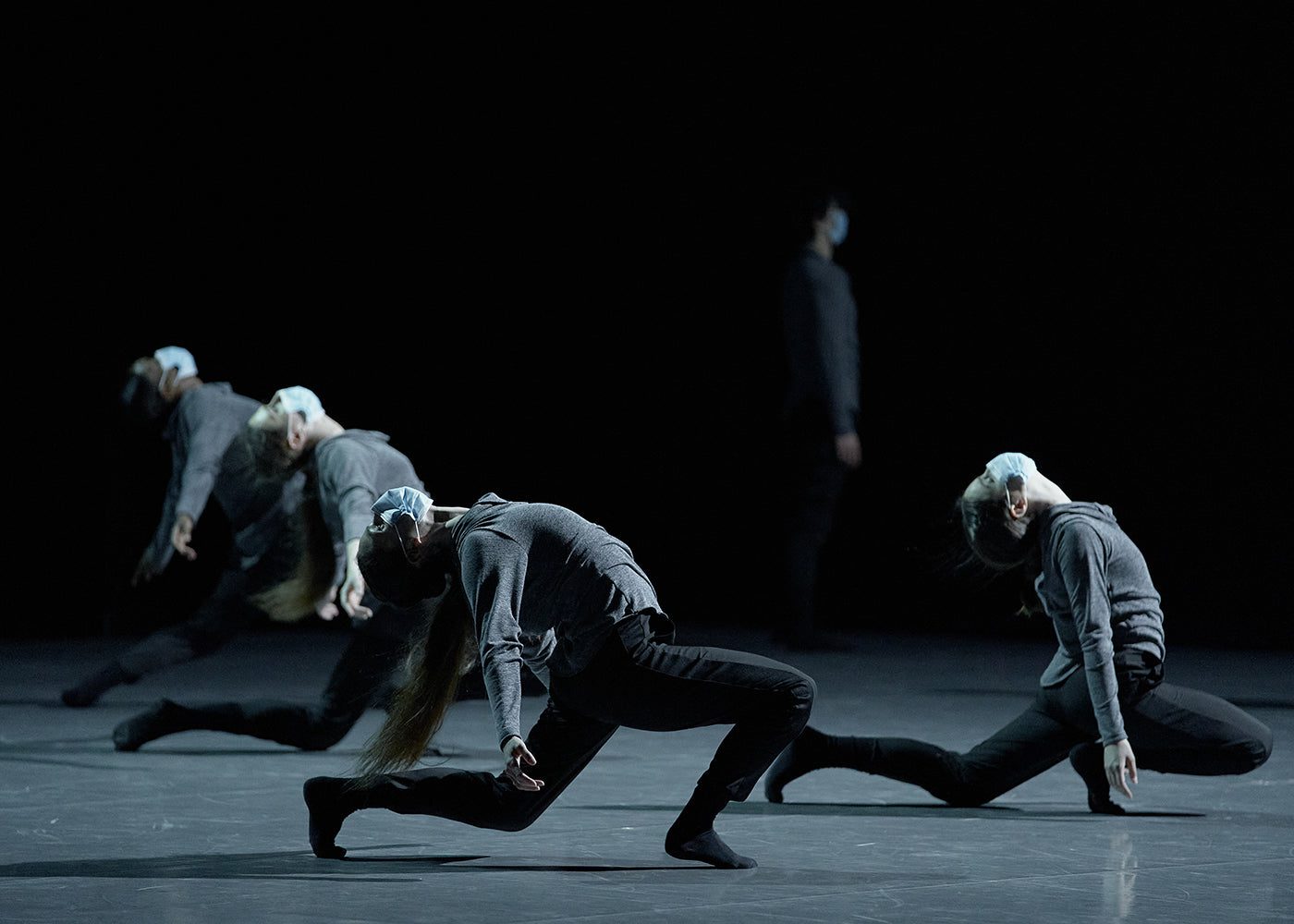 It has been over a year since theatres closed due to Covid-19 and against my own logic, I am holding a ticket to see Canada’s first in-theatre dance program since the start of the pandemic: Les Grands Ballets Canadiens in “Echoes,” a 70-min mixed program of eight pieces, contemporary and classical, to include two new works by Canadian choreographers Hélène Blackburn and Andrew Skeels.

As much as I wanted to experience that familiar feeling of anticipation that accompanies attending live shows, the emotion was quickly substituted by precaution and vigilance. Standing outside the theatre, we had a snafu with a surgical face mask and needed to jerry-rig a snapped N95 elastic—a minor wardrobe failure that brought into sharp contrast memories of pre-Covid dance shows: sauntering up to the doors, care-free, discussing a nearby restaurant, not noticing how the sounds of the street are exchanged for the din of Place des Arts where crowds gather for shows of dance, symphony, and opera all programmed in the same evening.

Except now, Place des Arts was mostly empty. We shuttled ourselves along vinyl arrows, passing stations of hand sanitizer. It was a surprisingly barrier-free experience (no health questionnaire, mask change, or temperature check), which due to my newly formed boundaries of safety, made me feel a slight pang of social guilt. It whispered, “Perhaps you should have stayed home.” Yet, here I was. I was glad to see the familiar red-carpeted foyer of Théâtre Maisonneuve with its floor to ceiling windows and tall palms that looked more Miami than Montreal. We eventually settled into our seats, feeling assured by the fact that no one else shared our row.

The program I watched early evening on April 21st opened with four couples in a Spanish-inspired “Majísimo” by Cuban choreographer Jorge Garcia to music by Massanet. The music is challengingly slow at times and the piece is full of all the usual classical ballet stunts, which means it’s a hard one to execute without perfect legs and a strong cast of classical technicians. The female dancers fared considerably better than the males, who could not find sharp execution or unison in sections that were meant to breeze and soar. Personality was paramount here, but as the first to go onstage in over a year, the dancers may have been nervous and they conveyed little of the playful over-confidence needed to pull off the Spanish number.

From that point on, I must admit the program became a bit hazy with its mish-mash of five different duos. A digital or printed programme would have greatly aided in keeping track of what conspired. I was able to be briefly transported from my confusion in “Blushing,” Peter Quanz’s neoclassical duet that added dimension to simple, repeating violin melodies by Bryson Andres. Dancers Célestin Boutin and Anna Ishii appeared completely unbounded by the stage, sailing through the piece together in one unbroken phrase. Capturing the elated crests and swells of new love in their buoyant lifts and perfect tandem, it was pretty to watch in every way.

Alongside “Blushing,” other duets throughout the evening—“Spring Waters” choreographed by Asaf Messerer and “Solace” by Garrett Smith—lost traction. And by no fault of the dancers; in “Spring Waters,” Myriam Simon and Graeme Fuhrman gave a beautiful performance. It’s just that there are only so many neoclassical duets one can absorb in a single evening, and when similar pieces appear side by side, naturally the strongest one stands out while the others start to look like bad copies.

Amongst the classical pas de deux on the program were an excerpt from Marcia Haydée’s “Sleeping Beauty” and “Le Talisman” pas de deux, a Soviet-era choreography by Pyotr Gusev (no relation to Petipa’s “The Talisman” which didn’t survive past 1917 and was incorrectly attributed to him in the press release). Danced by Rachele Buriassi and Esnel Ramos, “Le Talisman” was a typical show of balletic might and grace with a thin Orientalist narrative. While the dancers had their strong points, several parts felt as though they were only going through the motions. It would have been nice to see more intention behind the port de bras and nuanced gestures that are so crucial to ballet storytelling.

“Fête Sauvage, Volume 1” by Hélène Blackburn came as a pleasant aberration in the evening of duos, as a hard-edged group piece for eight dancers set to electronic tracks by the Montreal band Dear Criminals. The vibe was angsty and aloof. Dancers in black strutted up and downstage as if modeling a fashion collection. At various points, they stopped to form a duo or trio; one dancer pulsating to the overpowering beat in a contorted lunge, others pumping out a twitchy series of arm movements that could be Blackburn’s take on waacking. However, the piece never went to the extremes of raw pleasure or collective abandon that its title suggests. Instead, “Fête Sauvage” remained tidy and cool in its subversiveness, like a hipster scrolling on his phone at an underground techno rave.

The highlight of the evening was also the finisher—an excerpt from Andrew Skeels’s larger work “Requiem” that brought together the company of dancers. The piece is filled with urgency; dancers continuously run into formations that span the entire stage, their successive movements creating waves of mounting and crashing emotion. To the haunting tones of Brahms’s sixth movement, which overpowered the dance to a great degree, Skeels’s work bore much of the tragedy and loss of our current moment.

It’s true that “Requiem” was moving, but I felt it could have made an even greater impact if the evening was programmed tighter, with fewer pieces so as not to dilute the audience’s attention. Where eight pieces might have made sense for a digital program, this octal bill just didn’t cohere in real time. Ping-ponging between contemporary and classical more than a few times, it finally occurred to me that “Echoes” was in fact aspiring to be a gala, but had failed to be marketed as such.

It’s one in a series of programming bloopers since Artistic Director Ivan Cavallari took the helm of Les Grands in 2017 (recall the controversy surrounding his poster choice for “Stabat Mater,” which grossly sensationalized ’s Edward Clug’s piece; the controversial 2018 “Femmes” triple bill about women as “generous symbols,” which under criticism was relaunched as “Parlami d’Amore,” Italian for “talk to me about love”). The “echoes” theme is similarly canned and as conceptually ungratifying—echoes of what exactly? It’s not an answer that will be unearthed in the course of this program.

By the time I sat down to write this review, the company had announced an extended run of performances for “Echoes” with several changes in tow—Cavallari removed some of the aforementioned pieces (I guess we didn’t really need to see them in the first place?) and lengthened the program from eight to eleven pieces. Treating dance like it was an all-you-can-eat buffet, it’s a baffling artistic choice that only adds to the problem: more isn’t always better, sometimes it’s just more.