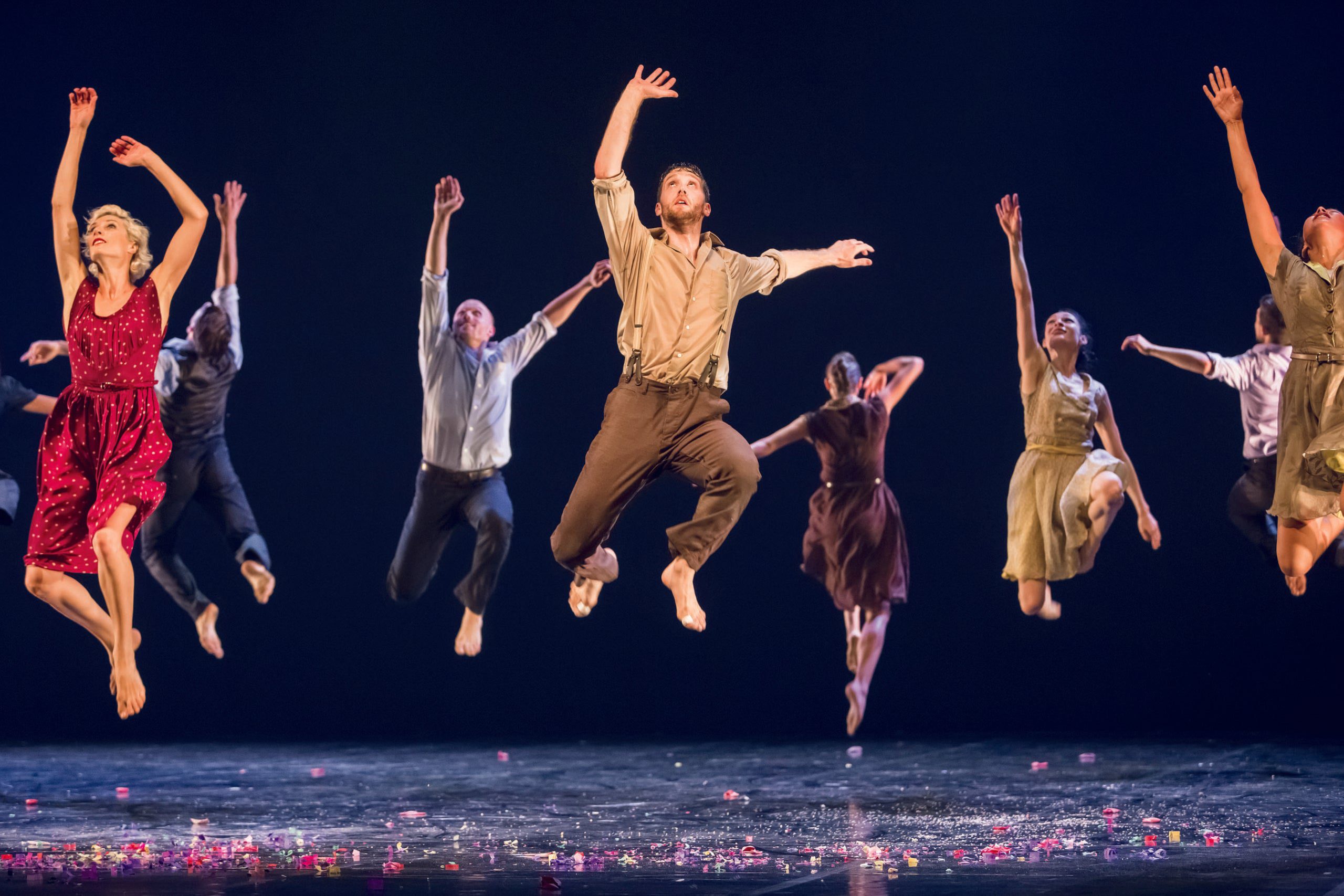 And all that Jazz

Ballet and jazz can make for some interesting, if occasionally odd bedfellows. Throw in some cookware and neo-Pina Bausch gestures, and a program could turn raucous, joyful and, well, neither balletic nor jazzy. At least that was the case when BJM took to the stage of the Wallis, Southern California’s newest entry into the performing arts arena, where, happily, its 500-seat Bram Goldsmith Theater is a welcome—and spectacular—venue for dance (theater and music also co-exist here in the heart of Beverly Hills).

But back to BJM: Founded in 1972 by Geneviève Salbaing, Eva von Gencsy and Eddy Toussaint, the 13-member repertory company has been under the artistic direction of Louis Robitaille since 1998. This Québec-born erstwhile dancer (not to be confused with the Canadian hockey player of the same name), continues to commission many top flight choreographers. Included on the roster are Crystal Pite, Aszure Barton and two of the dancemakers—Wei Wang and Barak Marshall—on this three-part program.

The concert, however, began with an older work by Millepied. A 15-minute duet from 2006, “Closer” is set to the art form’s favorite go-to composer Philip Glass, in this case his Mad Rush for solo piano. The score (heard on tape) veered from calm and cool to ferocious and flowing. So too, did the performers. Céline Cassone, who danced the world premiere of the work in Lyon, France, looked radiant, winsome and exquisitely pliant, her six o-clock extensions mesmerizing and her fiery red hair—in braids—bringing to mind a mischievous schoolgirl, albeit one with technique to burn.

Cassone’s partner, the noble Alexander Hille, made his many lifts look effortless and free, especially under Daniel Ranger’s moody lighting (after Roderick Stewart Murray). Indeed, the work might be called “Tangled Up in Ballet,” as the spider-like knots the duo formed when continuously coming together provided both tension and beauty. There was also a push-pull motif, and another in which Hille dragged Cassone across the floor, her soft slippers gliding as if on ice. Repetition ruled (inherent in Glass’s minimalist arpeggiations), but the sheer attraction the pair had for one another was palpable, with Cassone, a hood ornament, suspended high above Hille’s shoulders one moment, a rag dollish subject the next. The will-they-or-won’t-they question is resolved when the couple sits on the floor, entwined once again.

Wang’s “Night Box,” from 2012, featured the troupe in nightclub mode, with requisite lighting, i.e., dark, by James Proudfoot, and a score that featured music by, among others, Olaf Bender, Max Richter and Giorgio Magnanensi. In truth, the sounds were mostly nondescript electronica. Too long at 35 minutes, the work also seemed nondescript. Its numerous unisons, with dancers bobbing heads, swaying hips and jazzy splayed fingers, frenetically framed a series of duets and trios. The latter featured an energetic Morgane Le Tiec, Christian Denice and Daniel Alwell, while a male duo—Kevin Delaney and Youri de Wilde—and another pairing, Tara Williamson and Denice—also managed to break through the monotony. The cityscape projections by Denis Delude and Christian Lalumière provided further relief, but Wang’s moves—however many spins, jumps and group clumpings, or rampant flailings—would barely pass muster with today’s ravers.

Closing the program with Marshall’s “Harry” was smart, and so is his opus from 2012. The Israeli-American may have come to dance late—at age 25—but his background has been a factor, no doubt, in his very upwardly mobile career: His mother is the acclaimed dancer, choreographer and musician, Margalit Oved, with Marshall being invited by Ohad Naharin to become the Israeli-based Batsheva Dance Company’s first-ever house choreographer. More recently Marshall has made works that include “Monger” (2008), which toured throughout Israel, Europe, Asia and the States, while “Rooster,” premiered at the Israeli Opera House in 2009.

In “Harry,” a neo-absurdist barefoot dance drama made for the company, Marshall has bundled an array of sounds, from Tommy Dorsey and the Andrews Sisters (“Bei mir bist Du schoen”) to Maria Callas singing Puccini (“O mio babbino caro”). Butting up against Israeli folk songs, we are even treated (?) to some Wayne Newton, a Vegas mainstay whose big hit was “Danke Schoen,” heard again here in all its glory. And while the music rambles around eras (from the 1930s through the ‘60s), Marshall weaves a narrative from the Cinderella tale.

But here, the questing lover is Harry (de Wilde), who possesses a pot in search of a lid that fits, with the lovely Cassone finally coming up with the goods. Harry, who at the same time is trying to find his own voice, also manages to die over and over again (reminiscent of the Bill Murray film Groundhog Day) with his mourners offering text, both in voice-overs and spoken by the dancers. ‘Harry was a good man, but he was foolish and made God angry…’

Sure, why not throw in a little Prometheus, Zeus and an energetic chorus, intermittently marching and running about the stage, at times popping smoke-filled red balloons. As to antic moves, there’s plenty of shoulder-shrugging, low-to-the-ground lunging and rhythmic gestural miming. Daniel Ranger’s lighting adds to the ambiance, where waves of head-in-hands faux angst and a few open-mouthed silent screams are the perfect counterbalance to a little Fox Trotting.

Anne-Marie Veevaete’s costumes—simple shirtwaist dresses for the gals, jackets, slacks and suspenders for the guys—also harken back to simpler times. But ironically, and also underlying the overall jauntiness, Marshall tackles themes of battle, be they sexual, dealing with war, or those having to do with life’s daily trials, which the choreographer has said ‘is a constant struggle.’ Still, the overarching feel is one of hope, with the finale featuring the dancers’ outstretched arms while rocking to that Newton ditty, “Danke schoen, darling, danke schoen. Thank you for all the joy and pain…”

Next
Through the Snow, Glitter