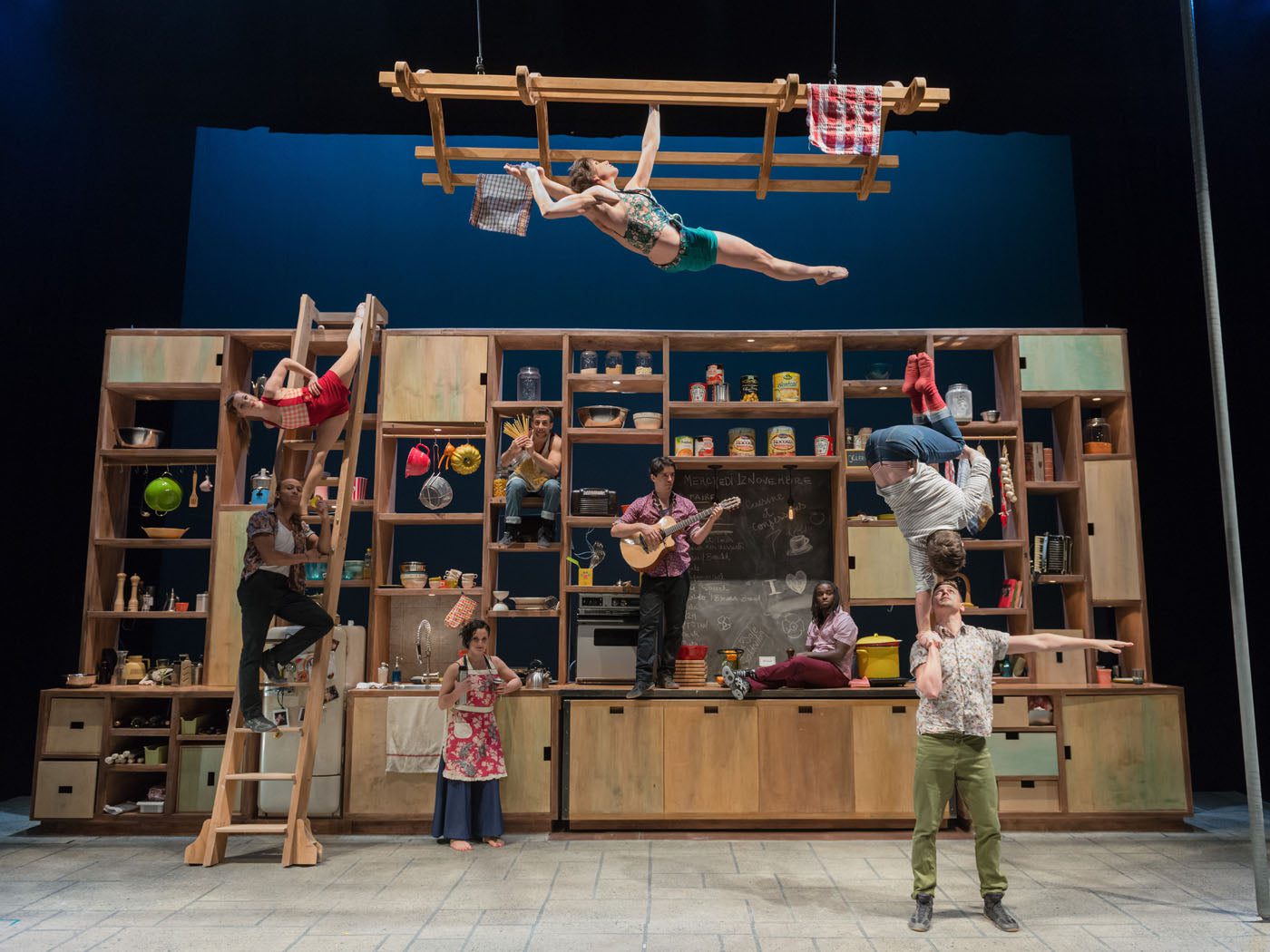 Les 7 Doigts de la Main (or “The 7 Fingers,” as it’s referred to by its English-speaking audiences) is frequently classified as a group of circus performers. Yet after watching one of the company’s elaborate productions, it becomes clear that this categorization is hardly enough to define it alone. The men and women onstage are circus performers, yes, but they are also dancers, actors, comedians, and—perhaps most surprising of all—they are people. People with stories and appetites.

The 7 Fingers’ recent production, “Cuisine & Confessions,” debuted in 2014 when it opened for the CINARS Biennale in Montreal, and has since toured France, Romania, Spain, Germany, Belgium, Austria, Switzerland, Italy, Russia, Turkey, Argentina, Sweden, and most recently America. At the time of its U.S. premiere in Boston, Massachusetts, “Cuisine & Confessions” had already been performed in eight different languages worldwide.

To call this show immersive is an understatement. Walking into the theater 35 minutes early, my guest and I expected to commence our usual pre-performance routine of flipping through the program, chatting quietly, and shutting off our phones as the lights dimmed. To our surprise, none of these steps were taken pre-curtain. We instead found ourselves walking into a fully operating kitchen. The company welcomed us with the mouth-watering aroma of pasta sauce boiling on the stove, as smoke wafted up into the theater lights above a bustling group of friends, all cooking, chopping, shouting, and laughing onstage.

The time leading up to the show itself was a production—or perhaps it served as an opportunity for the audience to recognize that they, too, were equally important in the presentation of the work to come. Everywhere you looked, there were performers mingling freely with theater-goers. Plopping down into the seat beside us, one performer began chatting with us inquiring if we could understand the language one of his comrades was quickly and emphatically speaking through a microphone. Within minutes, he had us conversing at ease before encouraging another viewer to join him for a casual stroll. At another moment, the group played catch with a lemon into the rows of seats, while other audience members were asked to come onstage to help chop vegetables for the sauce. Indeed, by the time the stage lights dimmed and the company asked that cell phones not be turned off, one no longer felt they were sitting in a theater, but rather in the large kitchen of a close friend’s home.

The production itself flowed smoothly from there, continuing this emphasis on interconnectedness across cultures, customs, and languages, using both cuisine and narrative as its two guiding principles. Physically, the company’s talent is insurmountable. Deftly transitioning from contemporary dance to acrobatics, and from gravity-defying aerials to muscular partnering, the 7 Fingers is an ever-shifting example of all the human body is capable.

While many moments of the production revolved around the joys of food with acts that sent the audience into uproarious laughter, it was the quiet, more somber moments that hit viewers hardest. Towards the beginning of the work, the comedic quest for the perfect omelette incorporates everything from seamless audience participation to juggling, with even the flutter of pepper from a grinder fully choreographed. Yet as the speaker behind the microphone strives to regain control of his moment at the podium, we discover that his association with the perfect omelette comes from childhood, when the void of being fatherless was replaced with Sunday omelette-making with his mother. As his words of finding strength in the face of obstacles continues over the speakers, he and another male performer begin a stunningly fluid duet. The two dive, bound, and rebound through a series of interconnected wooden squares both low and high above the ground. Their timing is impeccable, and the two help each other navigate the physical barriers at hand.

Fathers are a common thread throughout the show, leading to another heartfelt moment later in the production. A man speaks of the father he never knew, whose final meal took place under arrest in a concentration camp. Here, food serves as a way of connecting to one’s past, while also imagining an alternate ending. The conversation moves from “what did he eat?” to “what would he have really chosen?” The former is sparse and heartbreaking, while the latter is a beautiful representation of this man’s personality, heritage, and family. In this imagined ending, his father feasts, surrounded by loved ones—his cup literally overflowing. As this moving narrative is performed, we suddenly watch our storyteller leap from the counter onto a tall pole running floor to rafters, and—in a moment that left everyone speechless—he plummets to the floor, face first, stopping himself just inches from the ground. This simple gesture, interwoven with its complex monologue, left a poignant mark on this often light-hearted production.

Yet without doubt, it is the incorporation of the audience that makes “Cuisine & Confessions” such an uniquely dynamic performance. Whether being called onstage to chat over a bowl of olives; being serenaded by a surprise lover in the cast; or being handed actual freshly-baked banana bread and fresh pasta at the end of the production by the company members themselves, the audience feels completely included in this shared group experience—from the moment it enters to the moment it happily departs.

Previous
Body was Made

Next
Glitz and Glam