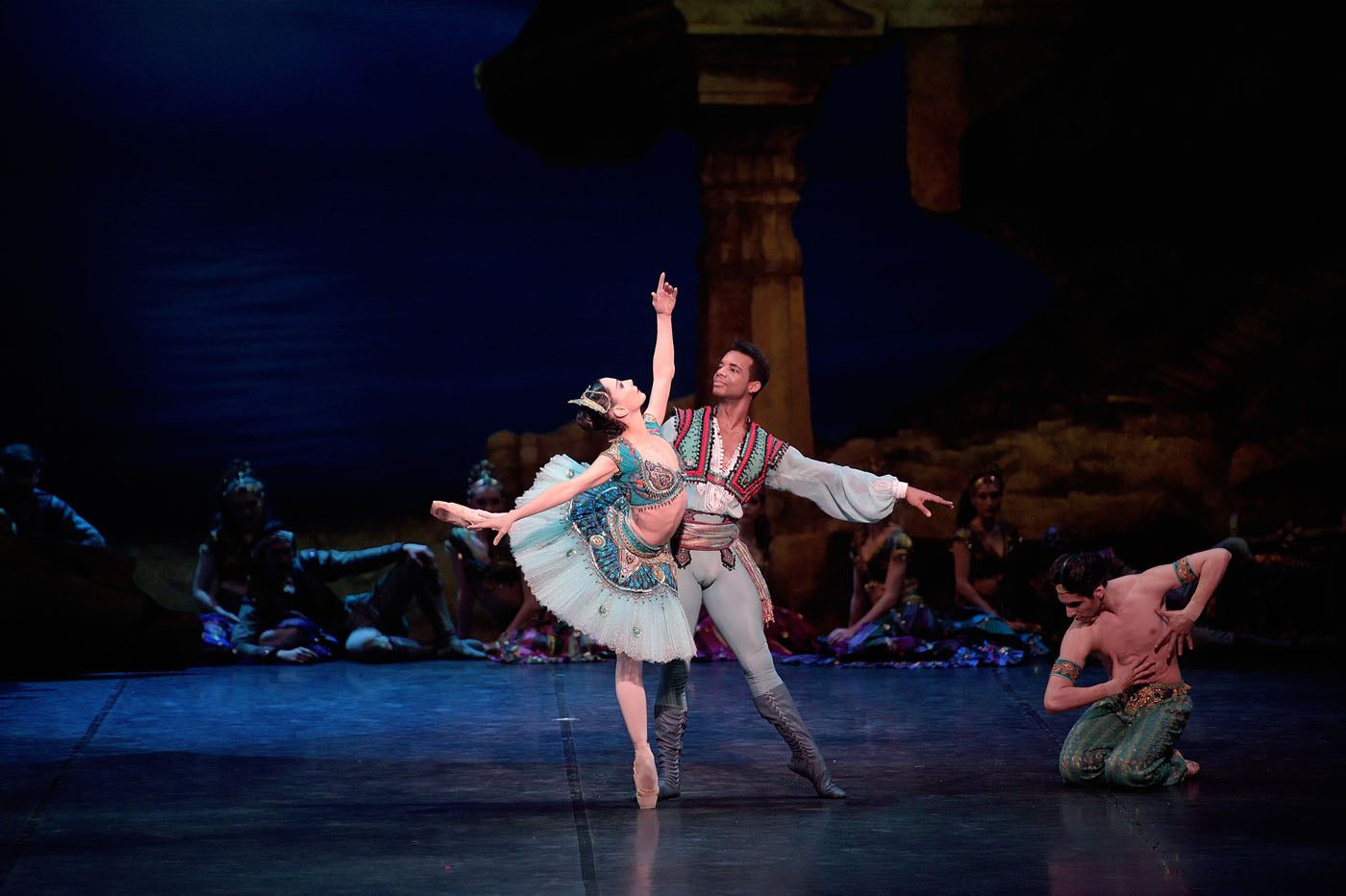 Although it was born in Paris (Vernoy de Saint-Georges/Mazilier, 1856), “Le Corsaire” is no prophet in its own land. Its lascivious oriental patterns could have been fashioned out by Nerval, Chateaubriand or Dumas’ literary orientalism. Yet “Le Corsaire” was based on an eponymous poem by a hereditary frenemy’s icon: the Englishman Lord Byron. In spite of its roaring success, in the upper spheres of the Second Empire, the exotic ballet soon started to sail away “over the glad waters of the dark blue sea,” thus falling into disuse at the Paris Opera.

Tamara Rojo’s en vogue company, the English National Ballet, boarded the Palais Garnier’s opulent ship in late June, at the invitation of Benjamin Millepied (departing artistic director). Even though there’s not much left of Byron’s bittersweet verse-tale, it seemed that “Le Corsaire” had been given back its original English flavor … in twenty-first century wrapping. And what a cross-cultural fireworks it was! Refinement of style and historical accuracy are nowhere to be found in that beautifully staged version by Anna-Marie Holmes. Overall, there’s more showing off than actual dancing. And let’s not dwell on the implausible plot, insubstantial patchwork score and circus features of that long-forsaken pirate’s adventure. Fortunately, binoculars focus on dancers’ artistry while senses are roused by the lavish settings of an imaginary Ottoman Empire. Through a candidly counterfeit orientalist scent—punctuated with funny commonplaces such as flirtatious Odalisques, fearful slaves, chest-thumping villains and a lustful pasha—“Le Corsaire” danced to an unfamiliar tune for Parisian audiences. The English National Ballet didn’t make its own the “disdain of prowess,” upon which King Louis XIV founded the Paris Opera Ballet. And Brexit or not, French spectators bloody liked the sudden rush of adrenaline.

Opening night casting featured a vividly Latin couple: Tamara Rojo as Medora and Isaac Hernandez as Conrad. Both are regular partners—unorthodox ones, physically speaking—but Rojo clearly wore the pants all along. Her hair is radiant ebony-black. Hers is a cast-iron technique. Rojo’s Medora is a Kitri in disguise. Witty and powerful, she devoured the space with assertive moves. And while many ballerinas her age gave up on classical ballet ages ago, double, triple or whatever fouettés are no big deal to Rojo’s effortless stamina. Brown-black curls, childlike charm and soaring jumps are Hernandez’s trademark. A ballet boy in his prime, he dances like a junior replica of Carlos Acosta. Still, being deprived of his usual majesty on Garnier’s narrow stage, his was a restrained Conrad.

The company mirrors British society as it is nowadays; sparkling, if not feverish, multicultural and individualist. Principals and soloists stand out like gems on a crown. New young talents are blooming at every corner, eager to seize challenging opportunities. Among them, junior dancers Cesar Corrales as Ali and Shiori Kase as Gulnare are rising in rank to become international stars. A 19-year-old meteorite, Cesar Corrales danced with restless verve, hypnotizing the crowd with his mile-high jumps. A bright hope of English ballet is born.

There’s one downside to that overpowering individuality, though. Obviously, dancers in that company aren’t meant to stand in the crowd. Number one casualty was the Jardin animé part, a diaphanous white fantasy that fell short of its inner vaporous romanticism. It was even anticlimactic. Corps de ballet ballerinas did recall old-style feminine loveliness with their graceful lines and rapturous costumes (reminiscent of Degas’ paintings) but mass ensembles lacked harmonious phrasing. Sadly, the classical highlight of “Le Corsaire” was robbed of its ethereal aspect.

“Le Corsaire” weaves a constellation of hilariously outdated clichés, but no one is fooled there. The ENB’s interpretation is humorous as hell and filled with communicative self-mockery, which reveals a brilliant sense of comedy. While some versions of “Le Corsaire” are nothing more than a pompous Grand Bazaar, even a marketing asset, Holmes’ take on the ballet presents a charming entertainment with picturesque aesthetics and virtuoso dancing. In a nutshell: it’s a treat for the senses. Watching “Le Corsaire” after “Giselle’s” 3-week stay at the Palais Garnier made it look all the more invigorating. Thank you, English National Ballet, for the session of light therapy.