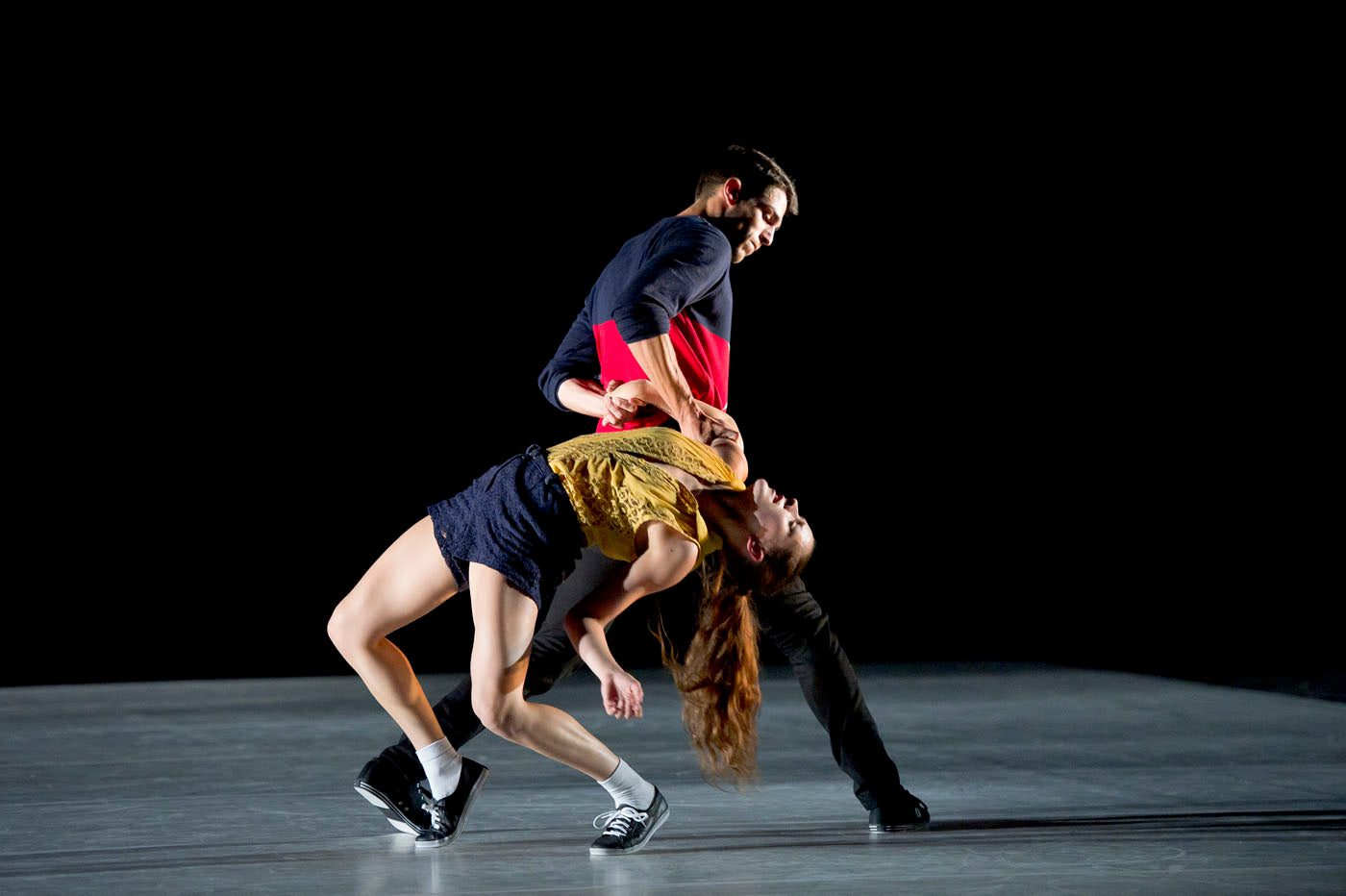 L.A. Dance Project's mixes it up

Long before statistics and news, murder ballads were a staple of European folk songs and traveled here with immigrants. Dylan, Joan Baez and a lot of Appalachian singers sung them. One of the most famous in the 1950s was “Tom Dooley.” But I remember hearing somewhere along the way, “Oh, listen to my story, I’ll tell you no lies, How John Lewis did murder poor little Omie Wise.” It’s the folktale of the early 19th Century murder of Naomi Wise. You can hear the tune and others deconstructed in Bryce Dessner’s original score, Murder Ballades, recorded by Eighth Blackbird. Resident choreographer of New York City Ballet, Justin Peck set his 2013 work of the same name on Benjamin Millepied’s L.A. Dance Project. It was one of three Philadelphia premieres on Annenberg Center Live’s winter dance series opener last weekend that introduced Millepied’s stellar company to Philadelphia.

Dessner’s swirling score and Sterling Ruby’s crazy quilt backdrop foreground the Americanisms in the choreography. High-kicking knees, bent torsos, flexed ankles, shorts and tee shirts conjured a contemporary hoedown with Appalachian roots. Cheerful for a dance about murder, I detected few clues indicating dark and violent deaths. In the opening scene, a dancer slides in like a third-base runner. She’s joined by five others who slip on the sneakers scattered around the stage. They pirouette en attitude with legs at various levels, arms screwing upwards. The women swoon backwards safely into the men’s ready arms. Two duets set mournful nocturnal moods, but still, we are not at death’s door. The six embraid with each other in a lineup facing the fourth wall. One apprentice, a half beat behind the rest, gamely struggled to stay apace, but ruined the effect of precision that Peck must have called for. Polite applause at its close confirmed we were still waiting for something to happen, that an opportunity for meaning had been missed.

Millepied’s “Sarabande,” deftly danced by Aaron Carr, Axel Ibot, Nathan Makolandra and Francisco Mungamba to excerpts from Bach’s Partitas elicited another shrug. The men wore cheery checkered shirts and jeans, and like the Three Tenors or Christopher Wheeldon’s “For Four,” they gave virtuosic solo turns and came together to play Motorboat, Motorboat. Mungamba’s barrel turns and stag leaps enlivened the applause as it ended. But I wondered if the title was well thought, as a sarabande is a slow and stately Spanish dance, whereas the costumes, classicism, and speed of the choreography suggested we were still somewhere in hoedownland. Maybe this was meant to be ironic, but if so it was lost on me.

There was nothing cheery about Ohad Naharin’s “Yag,” but here death’s door—a glowing crimson monolith—opened on a scene that portended no good. Yag is a Semitic word meaning the number five in Chaldean Numerology—the Chaldeans were one of the five original Semitic nations of the Bible.

Originally made in 1996 for his Israeli company Batsheva, Naharin created a new dance inspired by it for 2016, leaving a 20-year breathing space. “Yag’s” family of five dancers fits the Chaldean model, but a sixth member, a ghostly grandfather, may represent the shift from Chaldean Numerology to Pythagorean. The consequence is that suddenly, we are in a landscape filled with multiple possible meanings and a growing suspense and dread that had me, and I think the audience, at the edge of our seats trying get hold of the unfolding mystery.

It evolved like a family drama told in three chapters. Patricia Zhou begins grinding her flexed left foot into the floor like a screwdriver motored by her swiveling hip. She introduces herself, and her siblings who have joined in her movement, David Adrian Freeland, Jr. and Daisy Jacobson, introduce themselves in turn. Their father, Nathan Makolandra and mother, Rachelle Rafailedes, lie dead behind them, they tell us. Patricia says she never knew her grandfather and he, Aaron Carr, prances out from behind like a sprightly dybbuk. But this was a family, we are reminded most irksomely, that “really, really, really loved to dance.” Costumed by Eri Nakamura, they dance to music that ranges from Gaetano Donizetti and Ennio Morricone to John Tavener and John Zorn. Each selection powers the meaning in the choreography.

The parents join in to show us how much they like dancing with elbow flapping, bent-knee chicken-walking and ape-loping, and Charleston-like hand crossing over inwardly turned knees. A reverse birth takes place with the mother crawling backwards through her daughter’s squatting legs. Daisy comes out with an apron full of what look at first like pebbles, which she lays in a diagonal across the stage. I thought they were eggs and was really, really intrigued and impressed when Makolandra (as Nathan) began slowly walking barefoot along the line, crushing them. Why was this family walking on eggshells? But a friend with better vision points out they are fortune cookies. Even better! Do they tell the past or the future? Were the parents killed in the Holocaust? Other possible conclusions emerge. Is the red door an entrance to hell? Carr turns it sideways and reveals other forms of hell. Father dancing with daughter on one side, while mother rests her forehead against the other helplessly locked out, fists clenched at her sides.

Eventually, Nathan retreats behind the door, which now faces us again. He strips and throws his clothing over the door to his wife, Rachel, who dons them. Now naked, he crawls out and Rachel slams the door down him eliciting the kind of mad laughter that seems to erupt often in Israeli-based dance I’ve seen. His daughter, Patricia dances on him as if on his grave. Nathan slithers snakelike offstage. Wait! Have we been in the Garden of Eden all this time? Is the grandfather God? How did humankind begin? Incest had to be an initiating factor. Has time stopped? Naharin has left us as perplexed as Pina Bausch often did—confusing and confounding us in ways we take with us throughout our lives.