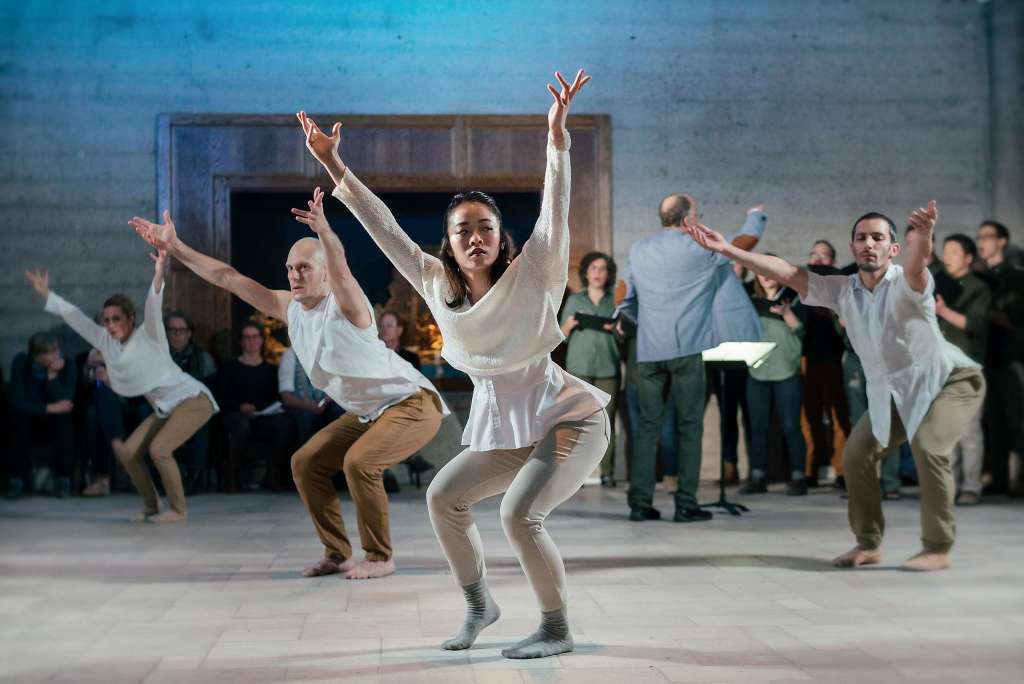 I don’t think I can avoid beginning this review on a personal note. I found Episcopalian Grace Cathedral at age 25, because I lived two blocks down Nob Hill and couldn’t figure out what else to do on Easter morning, never guessing I would convert and still worship at Grace 18 years later. KT Nelson, cofounder and one of two main choreographers at ODC/Dance, San Francisco’s most prominent contemporary company, found Grace via a more circuitous route. Hearing Joby Talbot’s choral score “Path of Miracles,” which dramatizes a pilgrimage along Spain’s famous Camino de Santiago, led Nelson to a five-week traversal of the Camino herself, which led her to choreograph the score, which led her to stage this world premiere inside the enormous Gothic cathedral on the hill.

The scene was, at first, less than contemplative: Nelson standing at the baptismal font and shouting directions to either follow an usher to a permanent seat, or choose a white-clothed volunteer hoisting a white paper bird attached to a stick to follow from one phase of the performance to the next. We tromped through the main nave, past the altar, to the quire—where normally clergy and singers sit for the grand 11am service. A man tripped on a marble stair, fell to his knees, and called out “Jesus!” without reverence. The front row helped him. And then the journey began.

Talbot, who has also collaborated with Christopher Wheeldon (on “The Winter’s Tale”) and Wayne McGregor (on “Chroma”), structured “Path of Miracles” in four movements, corresponding to the four major stops on the Camino, one of the most grueling Catholic pilgrimages, which ends at the purported internment site of beheaded martyr St. James. The work is sung in Latin, French, German, Greek, and English, but it begins with a Taiwanese style of deep-throated Bunan singing, which sounded both intriguing and ominous as a capella group Volti gathered in the quire center, rumbling bass notes rising until the altos and sopranos layered dissonantly in and the sopranos at last shouted, “Santiago!”

The dancing exploded, too. It was instantly wondrous to witness up close. ODC’s style is built on passionate impetus, athletic propulsion, and articulate feet and hands. Here it seemed informed, too, by Medieval postures, the dancers pausing with faces lifted to beseech heaven when not shape-shifting through arabesques planted on grounded, bent legs. A foot-treading-the-floor lift appeared, and was repeated by Rachel Furst while carried upside down. A Volti bass singer delivered a stirring solo with Daniel Santos approaching from behind, presaging this production’s remarkably adroit integration of choir and dancers, the choir members never self-conscious.

For the second movement we all travelled to the North Transept, the audience/travellers gathering on the chairs and stone steps of the side chapel of the Nativity, or watching from the altar rail or the edge of the nave. This movement, driven by a melodic ostinato in the score, was the most pared down and to my mind the choreography’s greatest stroke of brilliance in contrast, built mostly on simple walking and the choir members forming pinwheels with the dancers in a complex vortex, dancers carrying the music stand and score so that even Volti’s conductor spun, too. Totemic architectures dominated, dancers stacked atop each shoulders, standing in echelons, the most veteran dancer, Brandon Freeman, emerging in a solo danced with a simple stick. In the sparseness of the movement, the white and brown cotton costumes, the concentration Freeman invested in the simplest steps, I did feel transported to a dusty road.

For the next movement, we were to roam the whole of the cathedral freely, among five simultaneous duets. I followed Freeman to the North side of the nave, the piercing clarity of Volti’s sopranos raining down on us from a high balcony, as Freeman clutched Jeremy Bannon-Neches’ bent leg in a sculpted cradle worthy of Rodin. The two caressed calf and foot, pumped chests in trembling, rolled side-by-side, then Bannon-Neche disappeared to leave Freeman thrashing, until the choir resolved to a low hum, and a soprano solo rang above like a clarion call to look up—and see another couple in white struggling on the altar, a distant couple negotiating a fearful intimacy next to the side chapel—a strangely reassuring vision of simultaneity.

For the final leg, we sat in rows on the South side of the nave, facing a more traditional rectangular stage space, an alto soloist introducing the melody, dancers in bursts of quick feet with arms pinned behind backs all around her. Now dancers lifted singers one at a time—really, most beautifully—and a mounting ecstasy in the music felt like an upwelling—but then Nelson, trying to hard to match it, I think, layered bathos on top. Natasha Adorlee Johnson took center stage for a solo with one of the paper birds, lodging it in the crease of her neck as she slithered and jumped, running about with this paper crane uplifted. It was, alas, too “on the nose” as a mentor in fiction writing used to gently alert me—a crutch for a level change that could have arisen purely from the dancing, or from a far more unexpected symbol capable of lifting us to a new plane.

In that final celebration, dancers guided a handful of audience members to begin their own pilgrimage up the nave, toward the ever-glowing Creation Window. I hope “Path of Miracles,” too, will walk on—perhaps staged in more sacred spaces nationally and internationally. If Nelson will trust in a more ambiguous ending, this score and this dance together may inspire unexpected next steps.