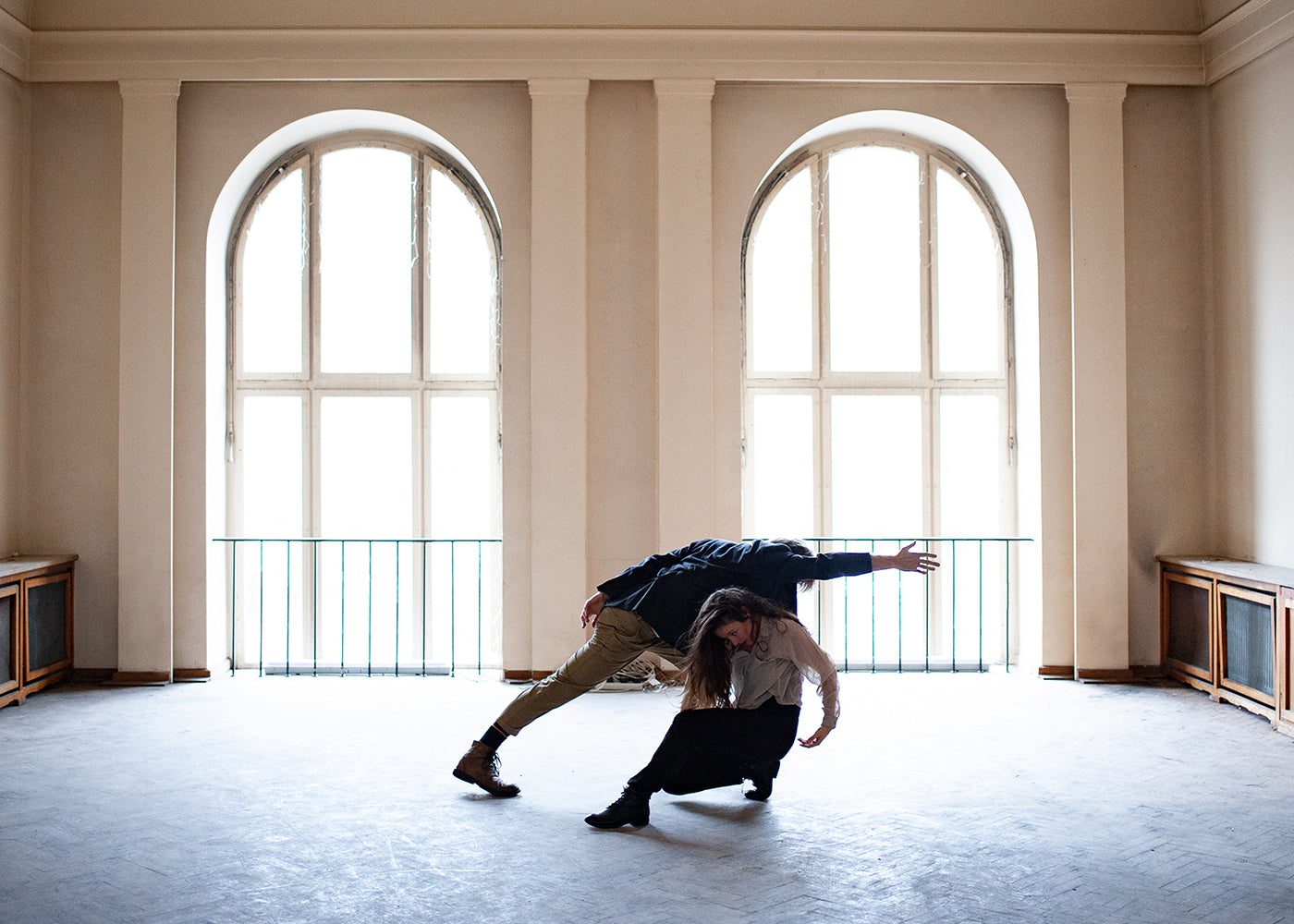 Pascal Merighi’s raffish confidence dazzled when I first saw him dance in Pina Bausch’s “For the Children of Yesterday, Today and Tomorrow” at the Brooklyn Academy of Music. He all but hurled dancer Ditta Miranda Jasjfi around his waist as if she were a lifeless rag doll.

That was in 2004. He set his choreography, “Songs of Childhood,” commissioned by Sadler’s Wells Ballet for Elixir Festival 2017, as a duet for Bausch venerables, Thusnelda Mercy and her father, the incomparable Dominique Mercy. Merighi used a narration of Peter Handke’s poem of the same name, which Wim Wenders also used in his film Wings of Desire. An impressionistic mirroring of the father and daughter through stages of childhood and parental letting go, the father appears first. The child hovers in the shadows of the wings, slowly walking into his life as they dance in tandem. He walks off to let her find her own movements in the space, returning to press his hands above his head as if making a roof for them. Hands in pockets, he circles around the child playing on the floor, trying to discover who she is.

Thusnelda joined the company sometime in the mid-2000s, like a little sister finally welcomed to play with the older kids. If you never saw the Wuppertalers live, perhaps you have seen Wenders’ Oscar-winning film Pina. Many of her original dancers appear in it. Unique in the world, each dancer was chosen for his or her own singular traits and quirks. Wenders lovingly limelights the Wuppertalers’ mannerisms, including Thusnelda’s who was born a Bausch veteran. Her mother, Malou Airaudo, also appears, having danced for decades with Tanztheater Wuppertal and partnered in life with Dominique. In effect Thusnelda was reared backstage and no doubt assimilated characteristics of virtual uncles, aunties, and siblings as any child would.

Pascal and Thusnelda became a couple some years after they each left Tanztheater Wuppertal, and, desiring to build something with their own imprint, they launched Kompanie merighi | mercy in 2017. In a Zoom interview with me in Philadelphia and they in Wuppertal, we spoke days after the insurrection of our Capitol Building.

They are now embarking on a new project circling back close to home with their own venue in the near vicinity of the Tanztheater Wuppertal. So, I suggest, this becomes not about any particular work of art but a story of a Kunstraum, a place where family, real and by kinship, can work together?

“It’s true,” Mercy said, “it’s not about an art piece but it’s where art works can potentially be created and developed. I like the name Kunstraum and it’s also a co-working space, where encounters can be provoked or randomly emerge through time and space.”

She was referring to the large area above the Barmer Bahnhof coffee shop owned by Thomas Leipoldt who first showed them the “hidden space,” and Kurt Rydl (the Austrian operatic bass) and Christiane Rydl, who own the buildings and offered them the space. With support from Diehl+Ritter/Tanzpakt Reconnect, they are calling it Tanz Station—Barmer Bahnhof.

Like everyone, I couldn’t first resist asking how her parents named her.

When “My parents got me,” she said. “as far as I know, Pina proposed my name to them. They liked the sound of it, but didn’t know much about the origins. That came later,” she said, referring to the Germanic princess captured by Germanicus in 15 AD.

“I had some troubles with it when I was younger, but then realized how special and rare this name was, that it was a very communicative name, as people would always be asking what it means or where it comes from.”

How did they cope with all the disappointments since the Pandemic began? How did they begin 2020?

Mercy turned to Merighi. “How did we? It’s feeling like every day has 48 hours. And we got our little son in September 2019, just in time with no obstructions in the hospital,” Mercy said with breathless pride. “I was quite blessed because I could really be with him most of the time and we could follow him growing, so this was fine.”

Together and separately, they had many projects and dance residencies planned until Covid-19 restrictions limited or shut those down. One of them was with Spanish flamenco dancer Juan Carlos Lerida, which they rehearsed with 6 feet of chain between them to meet Covid-19 distancing.

“Unfortunately, we also had to cancel the opening of the Tanz Station—Barmer Bahnhof on 30 January due to the current situation,” Mercy said. A soft opening in February was planned, starting with digital programs, such as the professional dance training (taught by Mercy) every Monday from 9.30-11 a.m.

Merighi described the space. “It is the first floor of the Barmer Bahnhof, above the coffee shop, between the train platform and the Wuppertaler Opernhaus. The dance space with a sprung floor is 97 sq m and there is another room with a small kitchen and sitting possibilities for co-working. We have toilets and soon we’ll have a shower.” Technically equipped with lights that can also go outdoors if necessary, they also have audio and a beamer.

“And yes,” Mercy asserted, “there is no ‘real’ 4th wall in the Tanz Station, but somehow the possibility to see and watch some specific creation moments or other art interaction via internet. Maybe the camera and digital connection might be a new 4th wall . . . who knows.”

“Our project manager and business developer, Angela Köneke, joined us through this journey,” Mercy said. Two concepts Köneke originated are Support-Train and the Bahnhofsgespräch—Discussion on Tracks where “Thematics can also be proposed from outside, not just from us. With Support-Train, we will invite people on analog and digital formats, to talk about their specialties and share their knowledge. We are building together as a team.”

And yes, what will make it a dream team is having colleagues from near and far and kin like the playful Dominique, who babysat his grandson during our Zoom meeting.

Next
Beauty in Japan