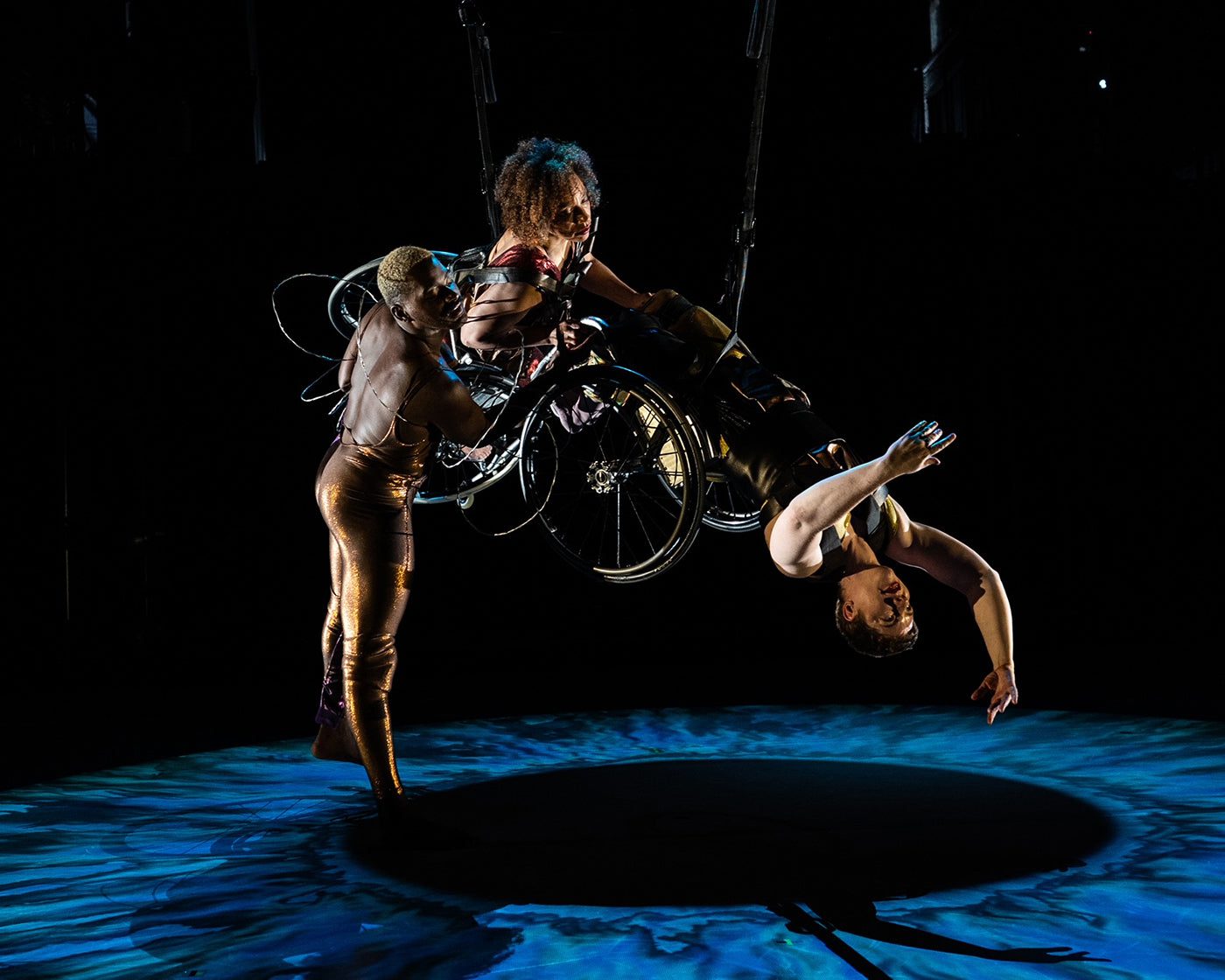 “Wired” by Kinetic Light opens at The Shed

Two dancers roll onstage, crossing each other to create diagonal lines with elastic ropes made to look like barbed wire. They grab bungee-like cords that hang from the rafters and clip them into the harnesses around their torsos. With one hand holding the line and the other holding the wire, they float into the air along with their wheelchairs. Facing upstage, they dangle up there for a few moments before the house lights dim and the first section of “Wired” officially begins.

Such was the nonchalant opening of Kinetic Light’s latest production, where expert aerial rigging and stagecraft, along with the dancers’ pristine technique on the ground and in the air, accumulated to the extent that their greatness was simply a given. A disability arts ensemble, Kinetic Light is comprised of artistic director, choreographer, dancer Alice Sheppard, dancer, technology lead, choreographic collaborator Laurel Lawson, dancer, choreographic collaborator Jerron Herman, and scenographer Michael Maag. Sheppard was inspired by Pyramid Up and Down Pyramid, a sculpture by Melvin Edwards she saw at the Whitney Museum of Modern Art. Through multiple experimental residencies in 2020-2021 the company embarked on an embodied study of barbed wire as they developed their first aerial work. The depth of their research was evident at the New York City premiere of “Wired” at the Shed as part of the free summer series, Open Call.

A colorful, kaleidoscopic light envelops Sheppard and Lawson as they begin to flip, fling, and swing. They circle and crash into each other and drop down low to skim the floor making us aware of the full dimensions of the black box theater, augmenting our ingrained stage directions of right and left, upstage and downstage, with a heightened awareness for the space between ceiling and floor. In a brief but spectacular moment of stillness they catch arms and appear to stop midair to the sounds of LeahAnn “Lafemmebear” Mitchell’s music, a crooning voice growing over the sound of a piano melody.

This manner of tandem flying was utilized throughout to satisfying effect, remapping relationships to gravity and offering new spatial planes for the dancers to connect. The rigging also enabled the dancers to put weight in their hands for extended periods of time in floor work. At one point, Sheppard sprints with her arms, only to be pulled back. As she rushes forward and slides back on repeat for a substantial amount of time, her outsized shadow animates both side walls of the house. In this sequence the specifications of the wheelchair became apparent, namely that it didn’t have back support, demanding a particular spinal mobility and strength as part of the technique.

Other juxtapositions, such as when one dancer was flying and another was grounded, created notable and complex moments of connection and disconnection. The second section opens with Lawson lying underneath Sheppard in her chair. Sheppard lifts Lawson’s limbs to create illusions of a multi-appendaged being; later Lawson manipulates Sheppard, aggressively pushing and pulling her head forward and back. Lawson flips over her and their bodies become intertwined. As Sheppard begins to fly, Lawson is suspended, twirling as she hangs from Sheppard’s chair. Sheppard flies higher now to the dissonant piano of Ailís Ní Riaín’s post-modern composition, forcing Lawson to let go. Alone, Sheppard pulls at her hair and her arms slash at the atmosphere around her, windmilling almost violently. Her solo ends with a series of gymnastic flips that are unsettling, as if Sheppard is stuck in perpetual motion.

The theme of barbed wire wound its way quite literally through the sections. The sharp teeth and interconnected nature of the wire was more abstract and suggestive when it came to the movement vocabulary: some references could be found in the dynamics of partnering as dancers maneuvered two rolling screens (made of curved metal bars that could have been a close crop of a piece of barbed wire) and navigated each other’s boundaries. In other places, barbed shapes seemed like inspiration for foot and arm work patterns while suspended. However, the wire’s presence was explicit in visual terms as part of Maag’s lighting, projection, and scenic design. The floor often doubled as a projection screen for various up-close images of wire. Three coils of it sat ominously downstage along with the rolling screens—both were more than scenery and were integrated into several sections of the dance.

In the final section of Act One, Sheppard, Lawson, and Herman kneel in three squares of light. Heads covered in black fabric, the wires now coiled around their bodies, their torsos undulate as if in prayer. With a stark search light shining into their faces and an underlying sound of an alarm droning in the sound design it was hard to imagine them as anything other than refugees stuck on the wrong side of a fence. Rocking side to side on their knees and then on all fours, they surge downstage, huddling together and rattling their cages of wire.

Later in Act Two, Herman explores spirals as he lunges and kicks, whipping his torso around as an image of the American flag appears on the floor. Lawson joins him and they waltz and tango in a tongue-in-cheek manner to what sounds like the score of a horror film, in sharp contrast to an elegant duet they shared earlier. Sheppard descends from where she has been waiting near the top of the stage and offers Herman a coil of wire. He grabs it and entangles himself, alternately wearing and wrestling with the it. Lawson and Sheppard watch him, they untangle him, and they eventually race circles around the stage as Herman lashes the floor (and the flag) over and over again with the wire.

I watched this work, but there were other formats for experiencing it. The Kinetic Light team centers disabled audiences in their work and in doing so, offered many entry points as well as exits: a pre-show speech with ASL interpreters told us we were welcome to leave at any point during the show and access doulas would be available to act as guides to a quiet space. A tactile table enabled one to have a sensory experience of the materials in the show and sensory/stim kits featuring tools to help customize the experience of the theater’s stimuli were given out in tote bags. Seven different descriptive tracks for blind and low-vision audiences offered a wide range of audio description styles: an experimental and experiential narration from Shannon Finnegan and Andy Slater, poetic prose from Cheryl Green, a soundscape from Dylan Keefe, an original full-length poetry cycle from Leah Lakshmi Piepzna-Samarasinha, and narrated movement and plot by Mo Pickering-Symes. Though the audio description was explicitly “not intended to augment the experience of sighted, non-disabled guest,” after Sheppard’s solo I began to wonder about it. Did it expand on the story? Aided by some program notes, I was only able to glean disjointed fragments of a narrative framed from various facets of the history of barbed wire, ranging in topic from incarceration and racism to boundaries and power. Perhaps this was by design.

The final sections included some of the most fantastical aerial moments as well as more instances when the dancing was free of rigging. Both were glorious.

In a brief duet between Shepard and Lawson, they roll their wheelchairs in synchronous patterns before stacking their bodies in different configurations. The weight sharing of their bodies and wheelchairs feels like a perfect prelude to the last moments of flying. Herman reappears in a circle of light, this time in a harness. (Each and every time he was ensconced in such light it felt like an inside reference to Herman’s solo show “Vitruvian,” which reimagines his unique and splendid form in the manner of Leonardo DaVinci’s famous sketch.) He leans into the perimeter of his circle, inverting and cartwheeling, before pushing out and up even higher, into a great dark expanse as the floor under him ripples out in what looks like an ever-growing target.

When Sheppard and Lawson return, there is a new rigging. Looking like a pair of scales, Sheppard and Lawson are clipped into bungees extending down from either side of a horizontal bar. Herman re-enters, shaping a tableaux where they seem to hover on his shoulders before taking flight. With both dancers connected to a single bar, the setup is somehow more and less stable than before; any movement from one creates a seesaw reaction in the other. And yet, they move in a blissful and deliberate slow motion. Lawson hugs Sheppard from behind as they swing; a choir of voices sings.

In profile to the audience, they hover side by side, faces toward the floor, arms open wide. I am certain this image is sublime for more reasons than I am able to parse—given my own limitations in experiencing this work as a sighted, non-disabled dance critic. A facile, potentially ableist, read might see a kind of freedom in the taunting of gravity. But my eye is drawn to how their wheels continue to spin even as their bodies quiet. They are actively resisting such a terrestrial force, and their decision to be still while suspended in the air exerts an ecstatic pull stronger than the laws of nature existing outside the theater. No matter the numerous interpretations that were rippling out from the many different experiences of this work, the audience held a collective breath in these seconds before they dropped down to their backs and the lights cut to black.

Next
This Just In