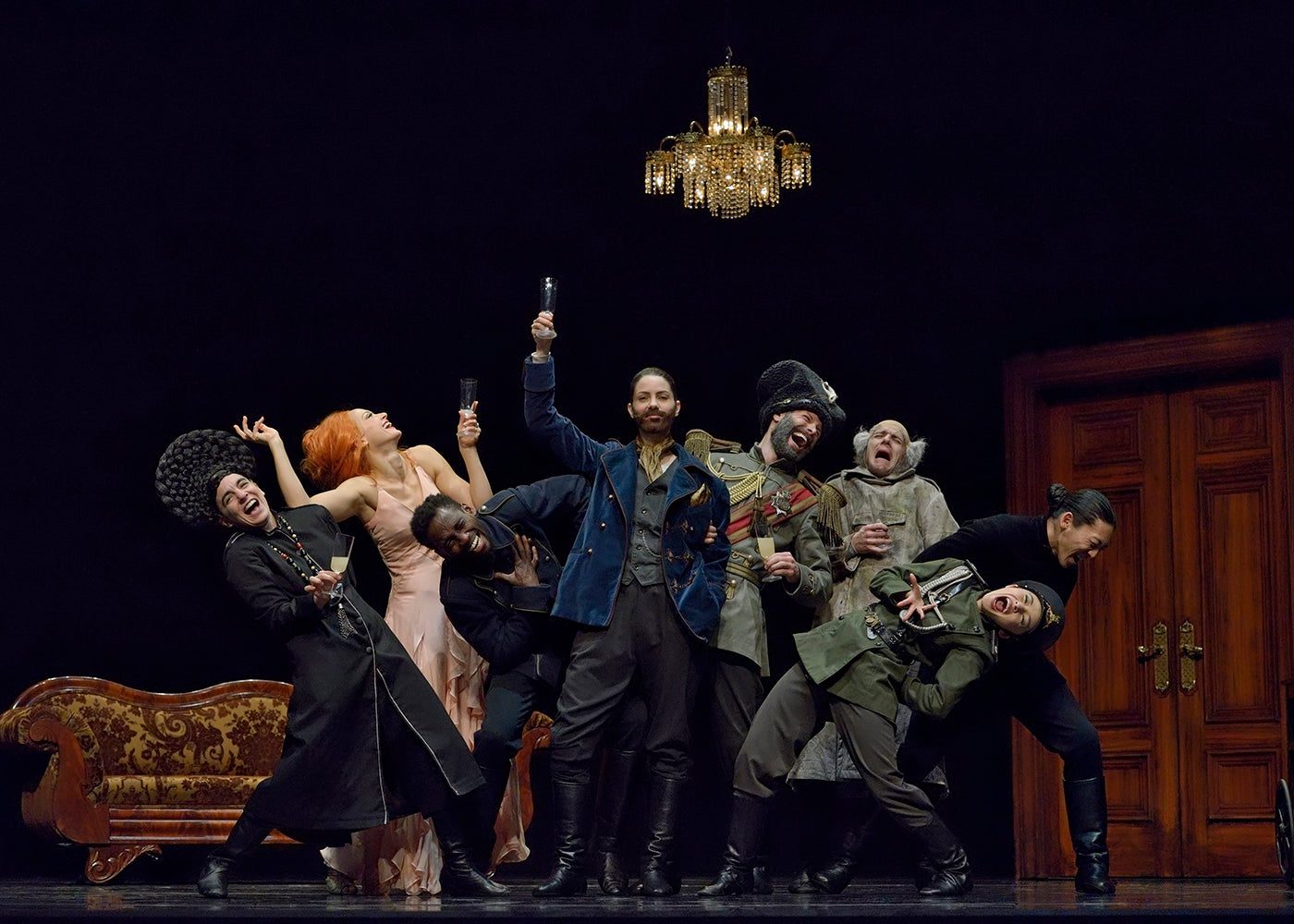 There is a striking clarity and intelligence with which Crystal Pite and Jonathon Young approach narrative. Their combination of choreographer and actor/writer/director is not only dance-theatre gold, but allows for an incredibly rich interplay between words and movement.

That interplay is key to “Revisor,” the latest work from the collaborative duo and Pite’s company, Kidd Pivot. Based on Nikolai Gogol’s 1836 play of mistaken identity, The Inspector General (or Revizor, in Russian), this is a narrative with corruption at its heart, and with inspection and interrogation as the driving force. Pite and Young take that and run with it, threading those themes not only through their narrative but through the very form and structure of this piece.

The words of Young’s text, heard in voice-over, gradually tell the tale. Sometimes this is the voice of a narrator, self-referential or offering a commentary on the action. More often, the narrative unravels through hurried conversations between a cast of eccentric characters, the words they blurt out echoed as repercussions through their bodies. In that respect the choreographic timing of this work, and the cast that perform it, is impeccable. They lip-sync the voice-overs as they move, as if the words we hear have been absorbed into their bodies and regurgitated, their physicality breaking down with each iteration.

That combination of words and movement can portray comedy and pain to equally disturbing effect. In a play of opposites, the farcical actions of the characters onstage often belie the darkness of the words we hear. The audience laugh but, as the dancers’ bodies break into stuttering isolations, it is as if their very physicality is unable to bear the weight of the conflict they face.

This play between what words can offer dance, and what dance can offer words, allows Pite and Young to layer meanings—to interrogate the very story they have chosen to tell. Words lend rhythm, direction and intent to the movement and, in turn, the dancers’ physicality relates more than can be said in one short spoken phrase. In the crossroads between movement and language, the scenarios have a depth and perspective which neither text nor movement could offer alone.

Gradually, this cast of uncooperative bodies reveal more than they are meant to. In their physicalised breakdown of communication and information, piece by piece the narrative comes together; only for it to unravel, trip back on itself and re-form (or revise, perhaps) as these characters inadvertently expose the corruption inherent to themselves and their world.

“Revisor” is an incredible work of dance theatre, impeccably and intelligently crafted. Yet with “Betroffeinheit” in mind (the previous collaboration by this genius partnership) I can’t quite shake the underlying sense of a somewhat prescribed approach to this latest work. From the pairing of words and physicality (granted, a signature motif) to the deconstruction of the initial scenario into a more fluid relation of the same story—paired with extended phrases of movement and a visual switch to grayscale costume and set—“Revisor” feels like a check list of Pite-Young choreographic devices.

Is that a problem? Not necessarily. After all, “Revisor” was borne out of a desire to explore further the farcical element touched on in “Bertroffenheit,” and this subsequent work feels like a more knowledgeable and structurally condensed version of that former collaboration; a refining of two artist’s craft and creative process. And, let’s face it, most choreographers and collaborative teams produce distinct works of similar style. For me though, that soft edge of predictability took the punch out of an otherwise astounding work of theatre.

Previous
Amidst Darkness, A Dream