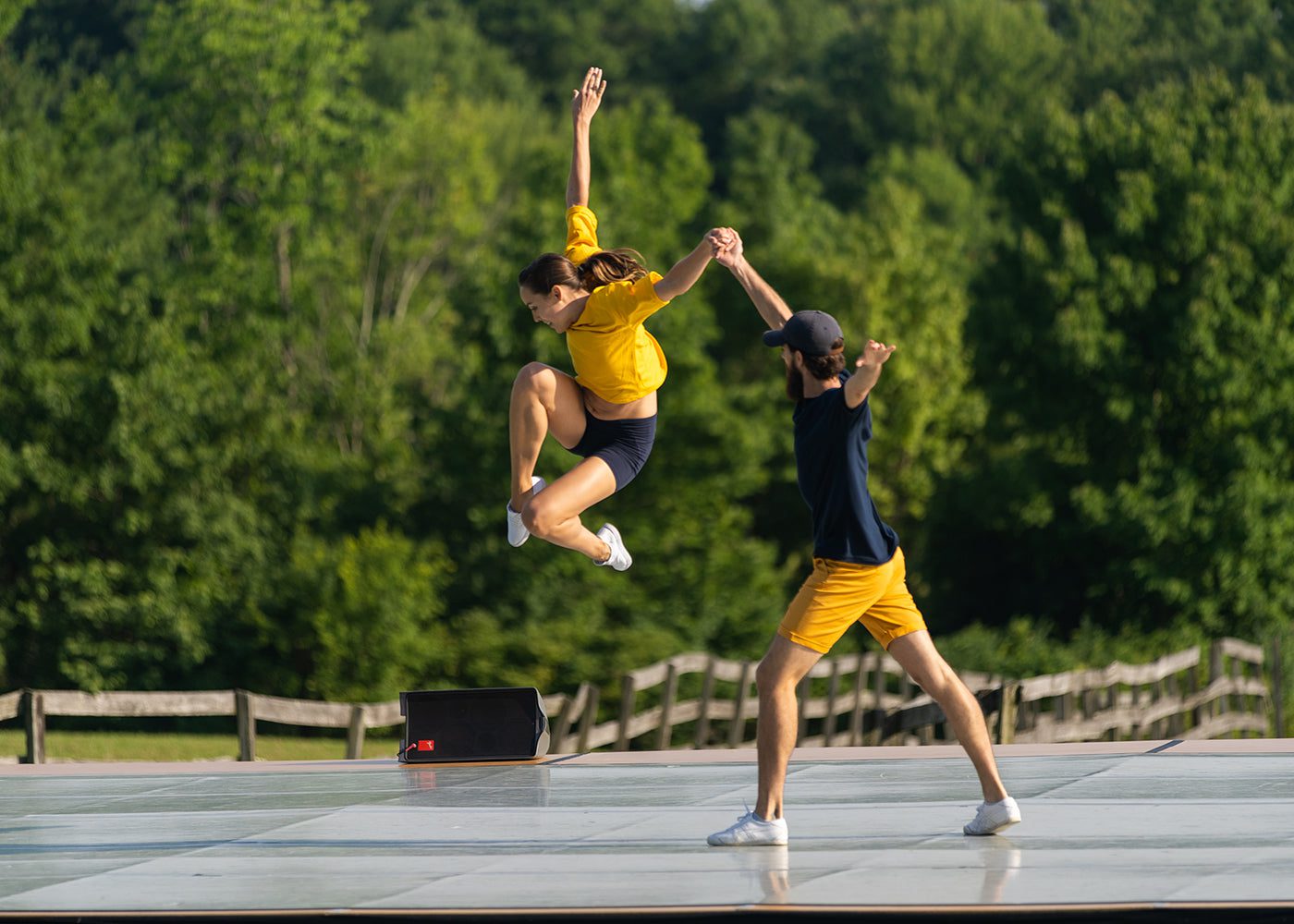 An evening of dance at Kaatsbaan Summer Festival

Real live dancing! In other times those three words might connote a neon sign outside a strip club. But in the time of Covid-19 you can simply take them at face value. And in this case, they refer to the highbrow shows of the Kaatsbaan Summer Festival, where a rotating cast of stars from the NY dance scene are performing on weekends all summer long. Stella Abrera, whose retirement performance as a principal dancer with the American Ballet Theater was canceled due to the pandemic just months ago, is already flourishing in her second career as artistic director of the Kaatsbaan Cultural Park in Tivoli, NY. In fact, she and executive director Sonja Kostich have managed to pull off quite a feat, holding the only live dance performances pretty much anywhere in the United States this summer. I lucked out: for the last five months I’ve been quarantining fifteen minutes away in the Hudson Valley.

There’s a reason that these shows are the only option right now: the logistics of gathering an audience and mounting a production during this plague are a nightmare. There is a cap of 50 spectators, a strict arrival schedule, requisite healthcare questionnaires, a ban on intermissions, and even a half-hour performance time limit so that no one needs to use the bathroom. And there can be no indoor congregations at this time, so the Kaatsbaan team erected a makeshift outdoor stage—without even wings or a curtain. Some patrons were carefully spaced on picnic blankets, some on padded benches, and some in their cars as if at a drive-in movie. The entire season was underwritten by donors so that every seat is free for the entire run, though donations are encouraged and a quarter of the proceeds will be given to the NAACP. In the same vein, the festival was co-curated by the prominent black dancers Alicia Mack Graf, Lloyd Knight, and Calvin Royal III. Unsurprisingly, tickets have been very hard to come by for months now.

The shows are all at 5 p.m. so that the stage does not need to be lit, and as I settled into my seat there was a light breeze rippling through the trees, a glorious blue sky dotted with cotton-puff clouds, and picturesque shingled barns framing the grassy fields. It was surreal, and I half wondered if I hadn’t dreamed it all up. After brief welcome speeches by Abrera and Kostich, Christopher Wheeldon introduced the program and gave a tribute to his “American in Paris” collaborator Robbie Fairchild, who was dancing in two pieces on the program—one of which Wheeldon had created for him a few years ago. And then, miraculously, real live dancing began.

Tapper Claudia Rahardjanoto, who had sheepishly stepped onto the stage during Wheeldon’s ode, sauntered over to a miked platform in sunshine yellow pants and a Kaatsbaan tee and started improvising. She was dancing, no music save for that made by her own two feet, a big smile on her face. It was startling—a moment of pure dance. Fairchild emerged whistling from the back of the stage (performers could crouch behind the platform until their entrances and exits) and then burst into an a cappella version of the Nat King Cole standard “Orange Colored Sky,” snapping and occasionally joining her for a few moves in his street clothes and sneakers. He has grown increasingly comfortable with singing in the years since his Broadway debut, and the piece felt relaxed and fun. It was the perfect opening to ease us back into the realm of live theater.

Fairchild and Rahardjanoto were socially distanced throughout their number, and they put masks on as soon as they left the stage. The second piece, “Untitled,” was a pas de deux both danced and choreographed by Tamisha Guy of A.I.M and Lloyd Knight of the Martha Graham Dance Company. It was set to a rueful score by Nicholas Britell. It began with an extended silent prelude. Guy and Knight walked from a nearby barn to the stage in black undergarments, wearing black masks. Once they climbed onstage they started dressing in opposite corners. They both lifted their masks for quick peeks at the audience before replacing them and commencing their duet as the music started. The brief facial exposure and costuming pageantry was a sharp commentary on what has become taboo these days. Uncovered noses and mouths are more provocative than near nudity. “Untitled” was all about enforced separation: they almost held hands, nearly embraced, and danced often in an “air” waltz position without actually touching. They also did a lot of mirroring and circling of each other. The frustration in these partnering what-ifs was palpable. The piece was timely and bittersweet, full of longing.

Emily Kikta and Peter Walker of New York City Ballet followed with a pas de deux that they choreographed and danced together: “a better way.” They took off their masks when they reached the stage, as dancers who are quarantining together were permitted to perform unmasked. When they touched each other it sent a frisson through the crowd. The first clasped hands of the evening registered as an emotional event—though the piece itself was cool and casually playful. They wore bright tees, shorts, and sneakers. Walker sported a ball cap and a long quarantine beard to match the indie vibe of the music by Andy Hull and Robert McDowell of the band Manchester Orchestra. (I’ve begun to think of all the recent male dancer facial hair statements like playoff beards in sports. In addition to being badges of honor, in this time of scarce haircuts these personal grooming choices have become theater in their own right: Taylor Stanley’s 70s’ ‘stache, James Whiteside’s manicured Wolverine look, etc.) Kikta and Walker balletically loped around the stage, she with a hint of a smile. The stage couldn’t quite contain them. They are tall people, and they frequently jumped right up to the edges on all sides. Fittingly, they jumped off the back of the stage on the last note, a great finish.

Scanning the scenery in the interlude, I noticed that the casts of the first three works had settled in the shade of some nearby trees to watch the last dance piece of the evening: “Us,” by Christopher Wheeldon to music by Keaton Henson. It was danced by Fairchild and his roommate Chris Jarosz (of So you Think You Can Dance and Cirque du Soleil), so they were unmasked. Though “Us” was not choreographed in response to the coronavirus, it began with the men reaching their hands towards each other and then pulling them away at the last minute. It made me wonder for how long that gesture—not uncommon in dance choreography—will be semantically co-opted by the pandemic. In normal times this duet would read as one of forbidden love, not as one of possible contagion as well.

Fairchild and Jarosz are physically well matched, and Wheeldon utilized this by having them do many counterbalances and back and forth lifts. It was interesting; in his male/female pas work Wheeldon often has the woman create crystalline shapes in the air, floaty and weightless. I think of Wendy Whelan’s legs frequently carving space like a scalpel—in most Wheeldon works she reminded me of a Brancusi sculpture: aerodynamic, slightly alien. In “Us” the feel was earthier, grounded, and wholly human. It was a nice piece as well as a good fit for the Kaatsbaan fields. At one point a triangle of birds flew overhead and they seemed part of the choreography. After so much virtual entertainment at home, it was heaven to see warm bodies moving through space, framed by the flora and fauna of the idyllic park. Even if the world returns to normal by next summer, I would seek out this experience again.

The program ended with a trio of songs executed by Broadway veterans. The first was “I Could Have Danced All Night” from “My Fair Lady.” The singing was pleasant enough, but I could have watched dance all night!