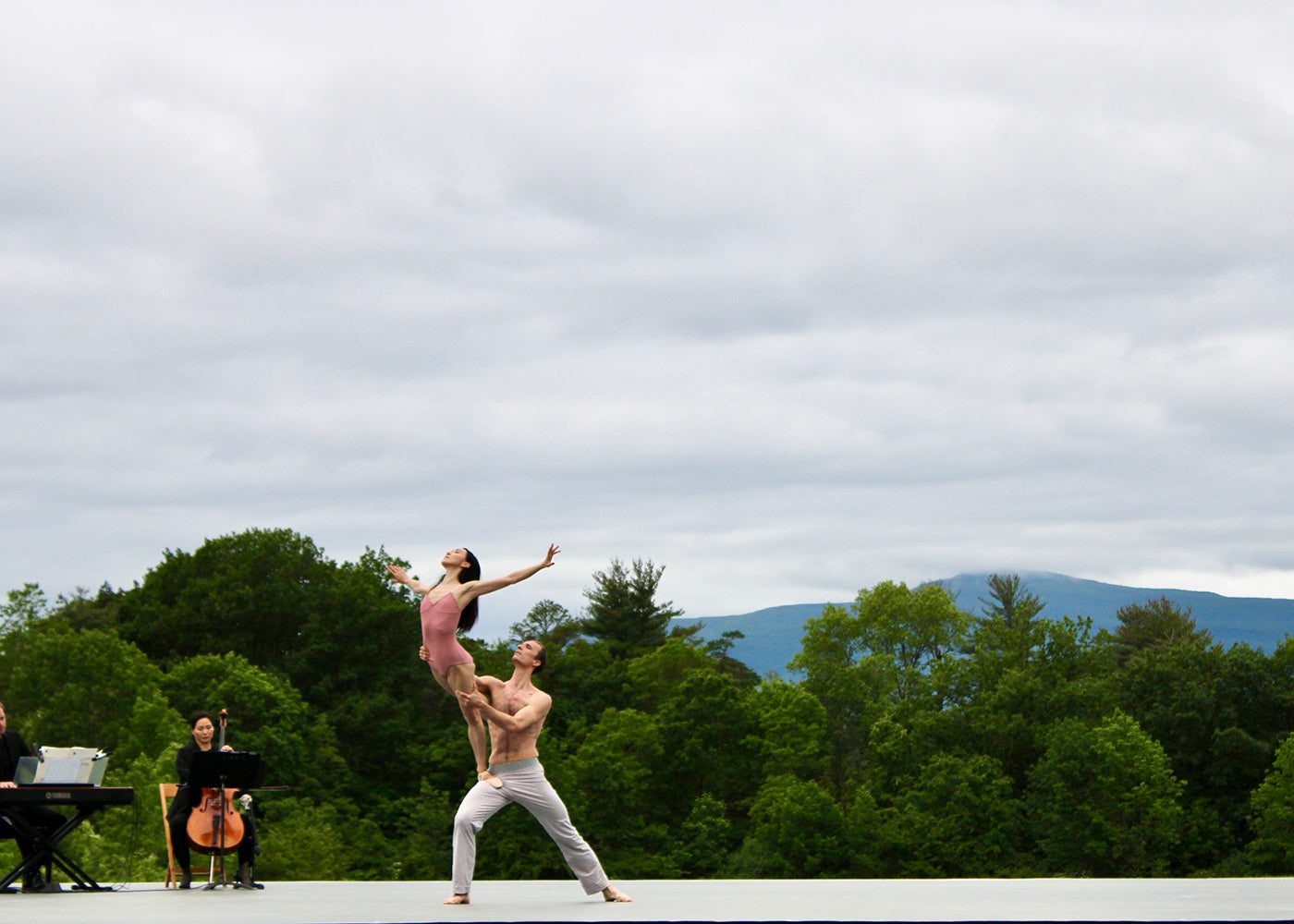 When I attended a performance at the Kaatsbaan Cultural Park last summer, it was a picture-perfect day. Though I went during the thick of the Covid pandemic, a gentle breeze rustled the sunny fields framing the beautiful dancing and I could almost forget about the raging virus. This year, Mother Nature had other plans. My original ticket was for the Sunday night of Memorial Day weekend, which was correctly predicted to be a rainout, so I was encouraged to attend the same program on Saturday instead. The show went on, though it poured up until a few hours before and the sky remained ominously cloudy all night. When I checked the weather on my phone midway through the performance, it was a mere 45 degrees. Though I was wearing every sweater I had packed for the weekend, a coat, a scarf, and insulated rainboots, I was shivering by the end of the hourlong program. I stopped taking notes when my hands got numb. I was sad that they got rid of the comfy banquettes from last year, this year it was B.Y.O. seating on the ground. The waterproof tarp I borrowed to lay over the cold muddy ground was less than ideal. But I considered myself lucky; I wasn’t trying to dance in the damp chill!

As fate would have it, the bill featured mostly scant costuming: leotards, bare chests, half-skirts, see-through mesh, and even a loincloth were the lot of the unfortunate dancers. Maybe one person wore tights. Most were barefoot. The artists gamely tried their best in the conditions. The crowd applauded hardest when they threw on sweats and ran from the stage into warm, idling cars on the sidelines. It was brave and sweet and kind of fun, except that it was also rather miserable. But after a year without live shows, I can say that this one felt extra alive.

The majority of dance performances happen in the meticulously crafted environment of a theatrical black box. Stage conditions, sets, and lighting are tightly controlled; a show’s excitement and unpredictability derive from the combination of live dancers, music, and crowds. Naturally, the addition of tempestuous weather makes for an even more intense experience—for better and for worse. Though it was the most uncomfortable I have ever been as an audience member, it was fascinating to see the dancers—all wonderful, and truly professional—and the dances in this stormy context.

The three pieces by the Martha Graham Dance Company showed extremely well in the foreboding scenery. This was fitting; Graham was an intense lady. The gray streaky sky, the rolling mist over the blue hills in the distance, and the blustery trees on all sides could plausibly serve as the backdrop for any of her works. Anne Souder’s powerful turn in Graham’s brooding “Immediate Tragedy” solo was one of the highlights of the evening. She was accompanied by Michael Scales’s sensitive piano playing, and together they met the elements head on. Souder stared at the swirling clouds above as she sustained a series of deep, spiraling backbends. It made it seem as if she was facing off against God—or perhaps the Devil.

But even the lighthearted “Satyric Festival Song” worked outside in the muck. This spoofy piece opened the show, and was danced by the excellent Xin Ying. She recently danced this on film for the Grahamfest95, but it was far more successful here. It is a piece that relies on the immediacy of a crowd; its jokey mugging falls flat otherwise. When Ying flipped around to face the audience on Saturday and acted shocked to see anyone there, it made sense. In fact, it was doubly funny for her to be surprised at our presence, given the crummy circumstances. Her paranoid flits of gaze around the wooded landscape made her look like a little chipmunk or sparrow attuned to the sound of every breaking twig.

The Graham duet “Conversation of Lovers” also benefited from the pathetic fallacy. This was danced by Xin Ying, now in a blood red Grecian half-gown, and Lloyd Knight, the unluckiest performer of the evening in a tiny scrap of a loincloth (he would not drop the towel from around his shoulders practically until his music started). They appeared to be engaging in some midnight pagan ritual deep in the cold woods. I half expected a sacrifice at the end. As it was, she hung from his shoulders like an albatross, while bluish smoke curled over the peaks behind them. It was great.

This duet followed Christopher Wheeldon’s on-the-nose “After the Rain” pas de deux. Though it should have been a good fit for the circumstances, it was marred by uneven sound levels. The cello mic was too loud, the piano too quiet. It is also a weighty dance for old partners, but Hee Seo subbed in at the last minute for Maria Kowroski and looked tentative opposite Ask La Cour. He calmly steered her through the choreography, but it was a case of a wise old captain navigating murky waters instead of two old salts in channels they knew like the back of their hands.

From glancing at the program, I thought “Unforeseen”—a pas de deux choreographed by American Ballet Theater soloist Zhong-Jing Fang—might be perfect for the occasion, as it was set to Camille Saint-Saëns’s dark and spooky “Danse Macabre.” But this circus-y pas was a bit of a mess. It was performed by Zimmi Coker and Carlos Gonzalez of ABT, who appeared goofily severe in black mesh turtleneck bike-tards, she with her hair slicked back along a sharp center part and dark lipstick. They reminded me of a Russian ice dancing couple. Poor Coker was the only one to attempt pointe shoes all evening, and she might as well have been on skates: the stage looked moist and slick. But even allowing for the fact that she had to be mincing and careful, the pas seemed oddly short on steps. They appeared to be killing time in between feats and melodrama. She “died” in a seizure-like lift at the end. It was possible the piece was meant to be so over-the-top as to be funny, but cold people aren’t prone to laughter.

This held true for the final work of the evening as well: Jerome Robbins’s “A Suite of Dances.” When Gonzalo Garcia climbed onto the stage in a burgundy velvet top and thick trousers, the entire audience heaved a sigh of relief. Finally, someone appropriately dressed for the forecast! But the playful opening and closing movements elicited few chuckles. People were too chilly to relax and enjoy balletic witticisms. This didn’t mean people were disengaged. When cellist Ann Kim played the opening notes of the Bach score a woman behind me blurted out, “ooh, I love this song!” as if it was the latest Taylor Swift single. How I have missed little overheard bits like this while watching dance at home on my laptop all year.

Though the jokes bombed, the somber middle movement of the ballet was stunning in the dreary vespertine shift. I don’t think I’ve ever enjoyed it so much. Garcia’s monochromatic, wine-colored outfit beautifully complemented the forest greenery and the encroaching navy dusk. Ann Kim’s cello reverberated plaintively across the lea. When Garcia raised his finger skyward in contemplation, it was especially effective. I had not thought much before about how often dancers look up in choreography, and how much more potent that move is when they are looking at the actual sky rather than the lighting booms.

This passage, like Souder’s solo, was well worth the discomfort. But my favorite number of the night was “Ess Amor,” a pas de deux choreographed by Alvin Ailey American Dance Theater dancer Yannick Lebrun, performed by himself and fellow company member Samantha Figgins. The costumes, by Jermaine Terry, evoked sunnier climes. Lebrun wore mustard yellow harem pants, Figgins wore a yellow dress that flamed into red at the bottom. The piece was intimate and sensuous, with a lot of social dancing elements as well as falling, counterweight partnering. Somehow, they brought real heat to the stage. They seemed to be in their own world, far away from the cold, clammy hillock. The audience basked in their glow.

This year the Kaatsbaan Festival reminded me of the influence of nature on art, and the wondrous vicissitudes of in-person theater-going. But Lebrun and Figgins reminded me of the power of art to transcend one’s physical surroundings. It was heaven to warm myself by their fire for a spell.

Previous
In the In-between

Next
A Life in Dance