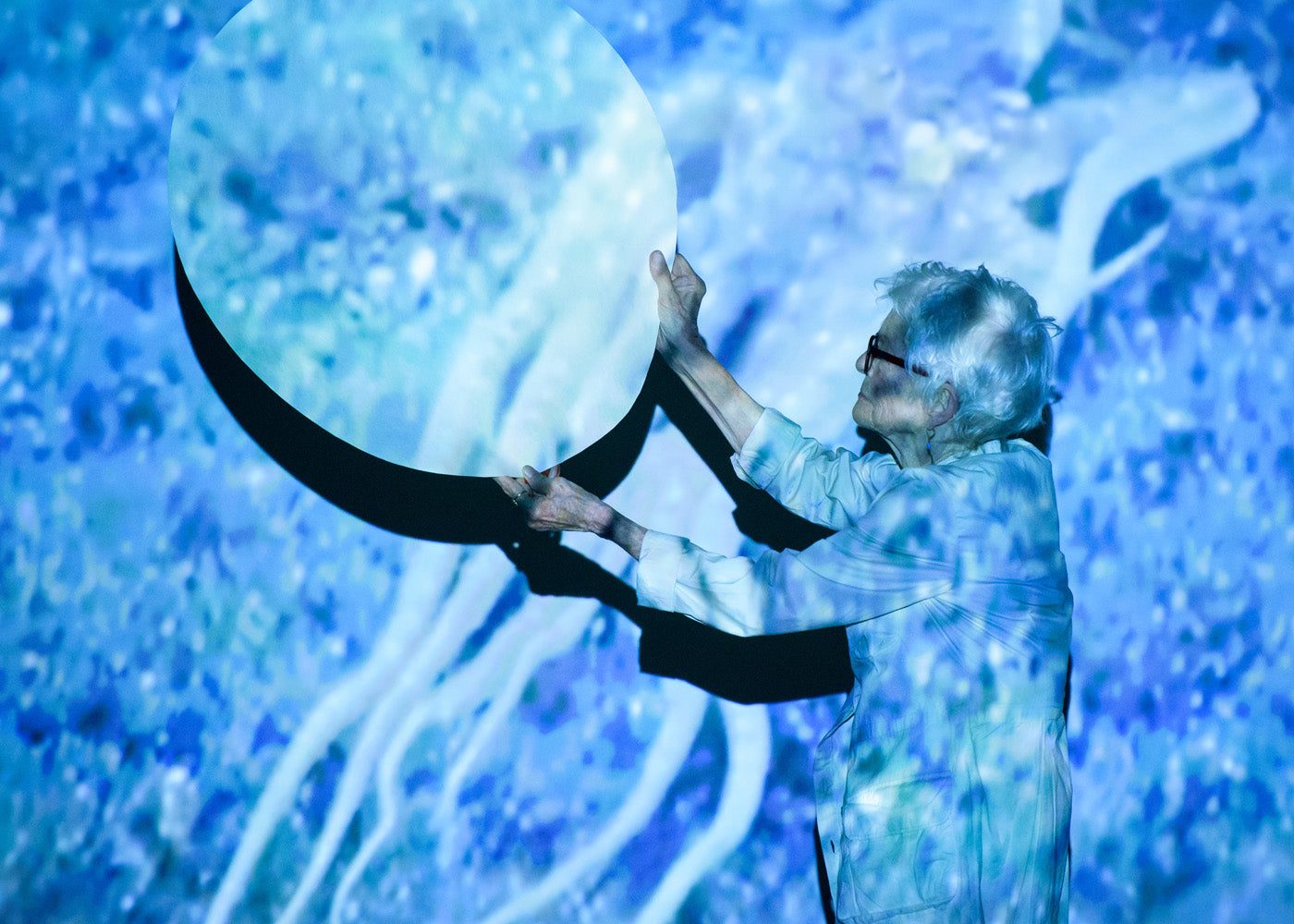 Joan Jonas' “Moving Off the Land”

An octopus named Octavia learns how to communicate with a human, and begins to blush in her presence. Certain fish like to be petted like housecats. Moray eels enjoy being cuddled, and manta rays can recognize their reflections in the mirror.

The pioneering artist Joan Jonas relates these facts as part of her U.S. premiere of “Moving Off the Land,” a “Lecture Performance” about the ocean, and how humanity relates to it, romanticizes it, and destroys it. Jonas works to mobilize environmental advocacy and action through amplifying the aspects that connect us to the sea, and exploring the visual and narrative resonances.

Empathy with eels and octopi can be tough; it’s easier to feel connected to our fellow mammal earth inhabitants than to strange and scaled undersea life. But, as Jonas explores, reckoning with the destruction we have wrought on the ocean involves feeling connected to and responsible for these life forms. After all, some of the distinctions that restrict our empathy—distinctions between land and sea, between human and amphibian—are more nebulous than we like to believe.

“We all come from the sea,” Jonas says, “and we have memory of it.”

This performance at St. Mark’s Church from June 14 to 16 marks the 82-year-old Jonas’s first appearance at Danspace Project since 1977.

During this performance, Jonas does sometimes “lecture” like a professor. She wears a white lab coat and quotes modernist texts like T.S. Eliot’s The Love Song of J. Alfred Prufrock, reads from a long scroll, and implores the audience to find sustainable ways of eating that don’t damage the ocean environments. Jonas, whose work was the subject of a recent career survey at the Tate Modern, is a formidable lecturer. And recently, she has created work that examines anthropogenic influence on animal extinction and climate change. But describing “Moving off the Land” in this way risks making the performance sound didactic—or worse, dull.

Instead, like much of Jonas’s previous performances, “Moving Off the Land” is a work of movement and myth. She considers Borges a major influence, and fills her work with corresponding aesthetic and conceptual themes: ritual, mirrors, cyclicality, and myth. In “Moving Off the Land” Jonas intercuts ghostly black and white aquarium footage with video of herself swimming gracefully through brackish water. Onstage, she moves in front of a large screen as undersea creatures appear to preen and scuttle over her. At times she wears a crown of kelp and fairy lights, speaking into a microphone. Later, she shows a video of a rotund fish moving its lips open and closed; set perfectly to the performance score, the fish looks as if it’s lip-synching.

Each of these performance choices function, miraculously, to make “Moving Off the Land” feel like a cohesive, otherworldly work—a testament to Jonas’s vision and control. Through these hybrid forms of dance and video and art and speech, Jonas probes the depths of the ocean as, as she’s described it, “a poetic, totemic, and natural entity, as a life source and home to a universe of beings.”

The ocean has occupied human imagination for centuries. Since we evolved out of the water and onto the land, we’ve created narratives that blur these boundaries: mermaids, sirens, sunken cities; a man who lived for days in the belly of a whale. These hybrid creatures are products of our fascination with the ocean as well as our fear of it—of being drowned or overwhelmed, of being lost in an alien world so close to our own. “All remembrance of her life on earth was forgotten,” Jonas recites from a medieval myth; “plunged into the sea, never to return.”

In “Moving Off the Land” Jonas explores this tension through a series of performance segments that function like vignettes. Through these, she blurs the distinctions between herself and the ocean creatures she loves through layering video screens and placing herself in front of projections. She crumples tissue paper-like material against her white lab coat so she can better meld into the background of the screens. In one part of the performance, she walks across the St. Mark’s sanctuary stage as shoals of fish move behind her on the screen, the lights and images creating the illusion that she herself is underwater. Later, she and an onstage assistant hold up circular mirrors attached to long, metal stems, an effect that appears to refract and stretch out the temporality of the video footage behind them.

In other moments, Jonas herself adopts the physical characteristics of the undersea life. At one point in the performance, she walks with her arms open and extended above her head, as if she is hoisting a large vessel on her shoulders. As she creeps across the stage, in small consecutive steps with her body arched sideways, she looks positively crustacean. Subsequently, as footage of what looked like whales fills the screen, Jonas runs across the stage with her arms outstretched, appearing to ride the whales as they float by. Though each of these moments are startling and strange in their own rights, they also illustrate how Jonas uses movement style as a way to create empathy with the ocean life our climate change is eliminating.

The systematic destruction of the ocean is a problem of colossal importance, and creating art that feels representative of this destruction means correctly capturing the scale. The Anthropocene is nothing short of mythic terror, as Jonas understands, so she contextualizes the destruction of the oceans within myth. She adopts the seriousness of ritual, sketching images of fish in dripping, blood red paint, and holding the mangled images up for the audience to see. She reads the names of fish off a scroll, like a biblical utterance: Swordfish / dogfish / moon jelly / star coral.

Collectively, these video and movement vignettes work to communicate the inherent kinship between ocean life and life on land—and that in light of this lack of difference, we must be aware of what exactly it is we’re destroying.