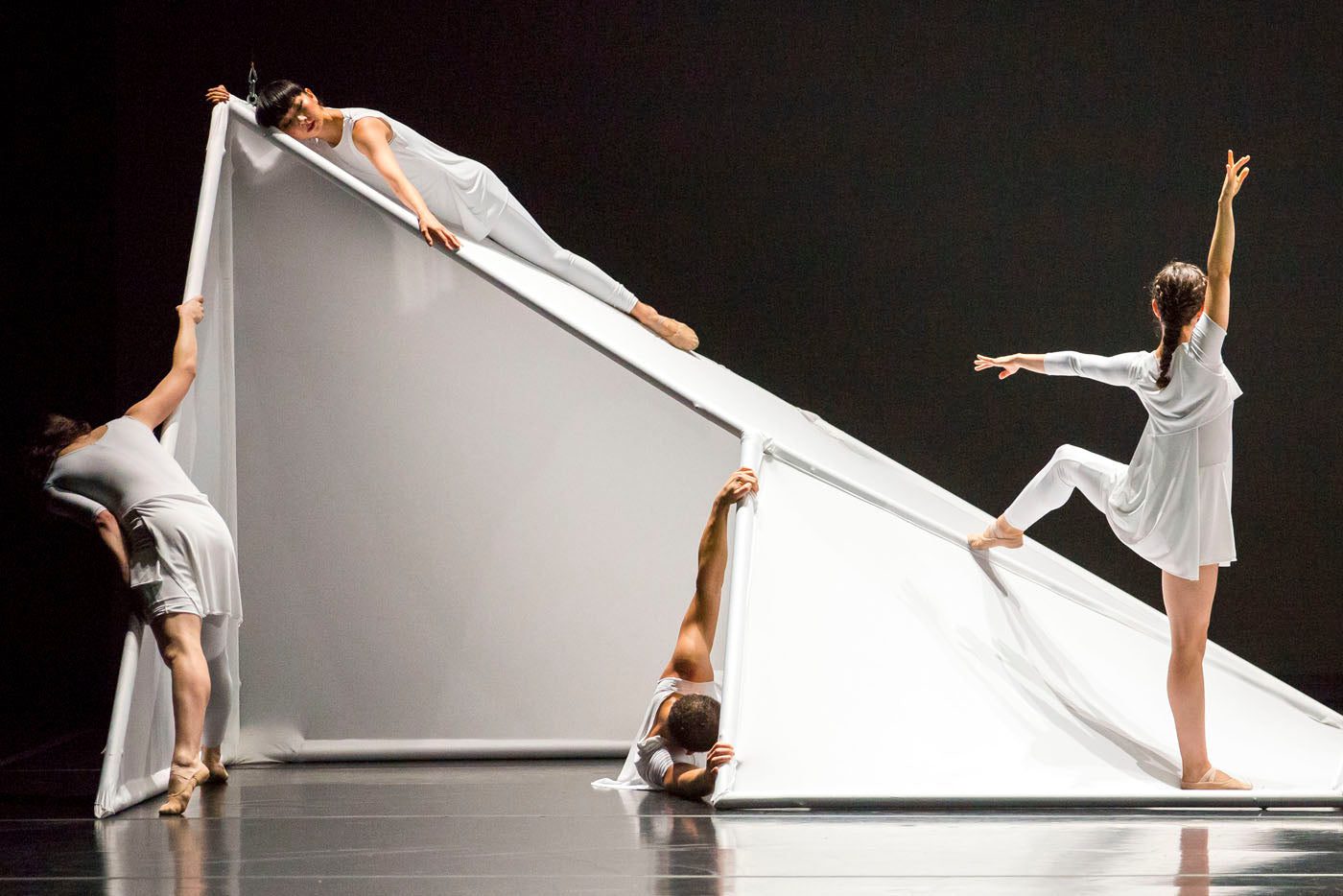 In a concert of five works—notable for a lack of discernible style—Jessica Lang Dance roared into Los Angeles last weekend as if it were the second coming. At only six years old, this troupe has somehow catapulted itself to the front ranks of companies.

Yes, its eponymous founder not only graduated from the Juilliard School and danced with Twyla Tharp’s troupe THARP!, but Lang, according to the press notes, has also “created more than 90 works on companies worldwide since 1999, including San Francisco Opera, American Ballet Theatre and the National Ballet of Japan.”

This is all well and good—and the dancers are very talented, especially Clifton Brown and Kana Kimura—but the two-hour program (with two intermissions), offered little depth, discoveries or delights, leaving this reviewer, in a word, underwhelmed.

Kicking off with the West Coast premiere of Lang’s 2015 four-part opus, “Tesseracts of Time” (a tesseract is a four-dimensional analog of the cube, however oxymoronic this may seem), the work was conceived in collaboration with architect Steven Holl, whose contribution was meant to convey a sense of architecture’s relationships to the ground.

Hence, the four sections, “Under,” “In,” “On” and “Over,” during which time nine dancers executed numerous unisons while also cavorting in groups of twos, threes and fours—around structures that looked, at times, like overblown origami, off-kilter kites or rejects from the set of Arrival. Set to a mélange of musical selections, including composers David Lang, Morton Feldman and Arvo Pärt, the work felt disjointed and, at times, precious.

Still, the second part, “In,” intrigued, as dancers performed behind a scrim and with a film, a kind of holographic study of movements, shape and sensory perception. Wandering in and out of the scene, performers partnered, hid and managed to create a mystique that also played with the notion of reality versus illusion.

When the scrim lifted—voilà—revealing three large structures, there was much scurrying and skittering around: men carried women aloft like hood ornaments on a car and a faux game of hide-and-seek was underway, while elsewhere, women executed extreme upside down splits.

Bradon McDonald’s 60 (?!) costumes for the 20-minute work did not help: White, and both flowy and clingy, they were unattractive, especially on the men, and in the final act, “Over,” Nicole Pearce’s bright orange lighting was, literally, an aping of the dancers’ garb (or vice versa), that seemed to resemble large swatches from Christo’s famed 2005 installation, “The Gates” in New York City’s Central Park. And the pink lighting? That, coupled with the pointy tops of the structures, gave rise to thoughts of politics and those now iconic, knitted peaked caps of “Pussy Power.”

In all, this work, replete with aimless ambling and a plethora of heel-rocking, did not seem to cohere with the architecture, nor did there seem to be a real reason for the structures, unlike in the work of, say, Jacques Heim and his troupe, DIAVOLO | Architecture in Motion®, where the bodies and set pieces not only tell a unified story, but are also manipulated by the performers as part of an integrated whole.

“Thousand Yard Stare” (2015), tastefully set to the third movement of Beethoven’s String Quartet No. 15, Opus 132, is Lang’s homage to our men and women in uniform, specifically those soldiers shattered by war, its title derived from the unfocused gaze of a shell-shocked warrior. For this work, Lang spoke with soldiers and conducted research on post-traumatic stress disorder. She again recruited McDonald (an erstwhile member of Mark Morris Dance Group who was a 12th season finalist on Project Runway and whose brother, a veteran, was also consulted), to create combat wear for the dancers.

Sadly, the work felt clichéd, with big chunks of faux unison marching, some flamenco stomping also thrown into the mix, and a lot of crawling, creating a tableau suggesting trenches, while at the same time resonating with both the evils of war and the camaraderie that war fosters. Pearce deployed an unattractive green lighting scheme, with, at times, flashing strobes, making the work appear contrived.

Then again, successful dances about war are few and far between (think Kurt Jooss’ 1932 masterpiece, “The Green Table”), while misfires abound (Alberta Ballet’s 2007, “The Fiddle and the Drum” set to 13 Joni Mitchell songs and against a backdrop of the singer-songwriter’s film and video projections). In addition to the lock-step variations (oddly, these moves occasionally felt like a futuristic Irish step dance), there was much piggy-backing and pirouetting, feeble cartwheeling and airplane arms.

And dancers, of course, fell to the ground and rose again, with Beethoven’s contemplative music an occasional respite.

Completing the program: “The Calling,” Lang’s brief, stand-alone work from her “Splendid Isolation II” (2006), although beautifully performed by Kana Kimura, was more about the Vionnet-inspired gown; “White: A Dance on Film” (2011) proved a minor diversion filled with requisite slow motion leaps and real-time running; and “i.n.k.” (2011), a cinematic foray into Rorschach territory—animated blobs, sperm, waves—with the indefatigable dancers literalizing the shapes.

As entertainment, Jessica Lang’s choreography might do the trick for some, but in the dominion of art, alas, she merely skims the surface.

Previous
A Given Light