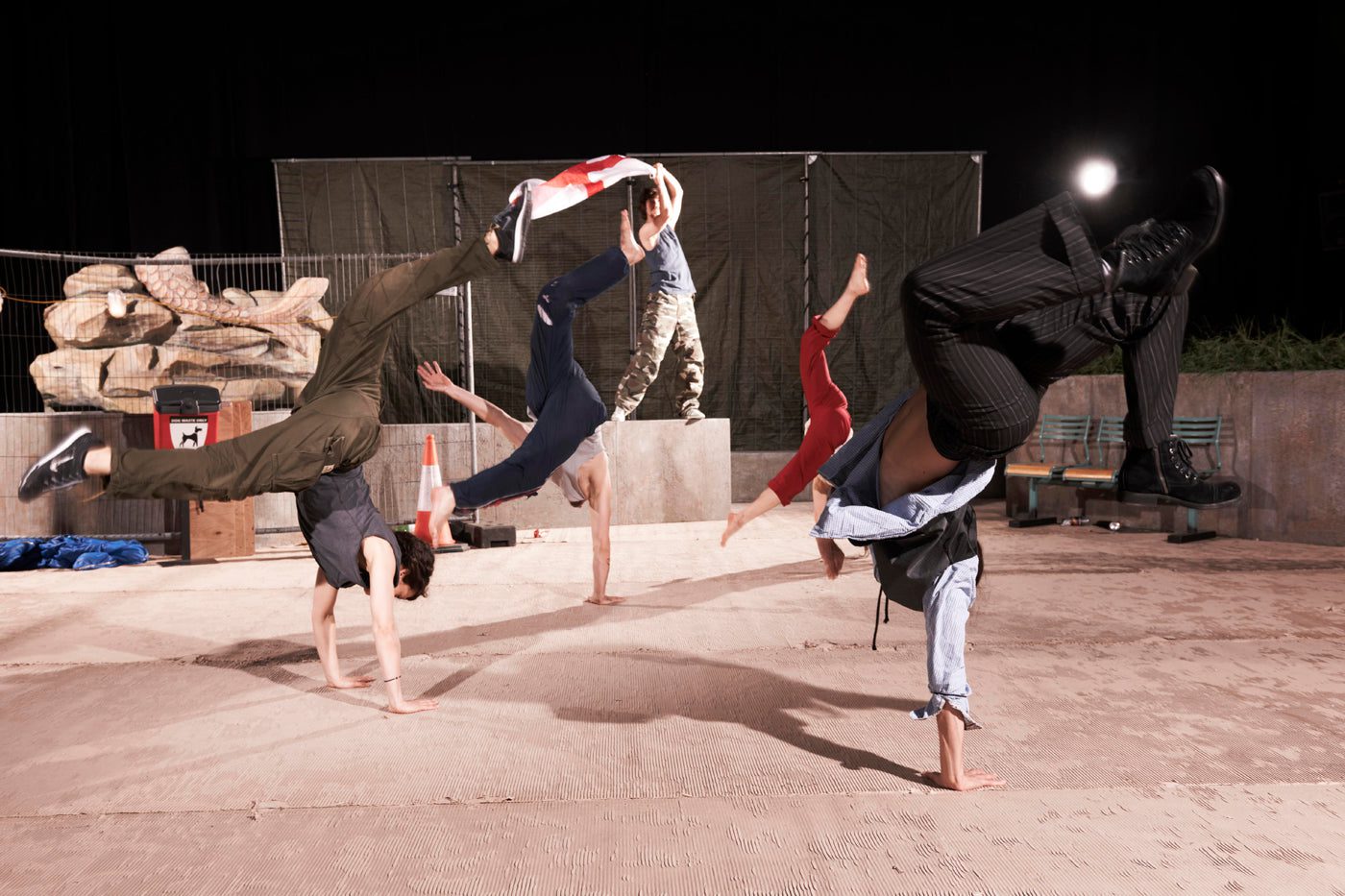 Instead of employing a straight narrative, this dance theatre piece tells its story through a series of interlacing vignettes, each one evocative, impassioned and quasi surreal. The twisted tale centres on an urban park facing commercial redevelopment and its occupants’ response to the impending loss of their communal space, which brings together homeless people, tourists, street performers, pedestrians and more. It’s an elliptical piece, its tone careening from wacky to biting in a flash, but the quality is steady throughout: Jasmin Vardimon‘s dancers commit themselves to their roles wholly, and the result is a crisp slice of social commentary on themes of ownership, class and belonging.

From the first curtain rise, the park—a bustling jumble of benches and fences and patches of grass, topped off with a trickling, crumbling fountain—is established as a shared entity: the house lights remain on for the first few minutes of the show, welcoming even the audience in. While together the park’s inhabitants represent a microcosm of a community, complete with established customs and relationships, “Park” doesn’t paint the space as some kind of idyllic oasis; in fact, one of the piece’s biggest strengths is the way it pays tribute to the less savoury elements of urban life (litter, dog waste, construction) as well the fractious relationships it inspires. A sunny bag lady strolls through the main square, but her cheer is interrupted by a confrontation between an aggressive young breakdancer and a homeless man. A woman argues loudly with her boyfriend, their discord magnified by a tourist snapping photos. There’s plenty of room for levity—a street performer tap dances, the breakdancer shows off his moves, the bag lady trumpets a song through a traffic cone—but the threat of strife looms constantly.

Vardimon’s trademark incorporation of text into her work comes early on in “Park,” when a property agent delivers a game show-style presentation on the history of the park and its potential for redevelopment. Words like ‘casino’ and ‘sushi’ whiz across a back panel as he hints at the changes to come, speaking in a sinisterly blithe tone about the benefits ‘investment in architectural and social cleansing’ will bring the neighbourhood. From here the park’s occupants engage in a whirligig of eccentric sketches that explore their social roles and the ways in which they relate to and diverge from one another. The weirdest segments involve a slinky mermaid figure who, among other antics: belts out a siren song that reduces a man to a growling dog; sweeps up the daughter of a private investor in a salacious girl-on-girl kiss; perches on the shoulders of a man, dress cascading over his head and torso, and hums “Fever;” and devours a suicide victim, closing the show by taking positioning herself at the head of the fountain, topless and dripping with his blood. The free-wheeling pace is fun, though it does lose its way at times: by the time the interval rolls around, it’s unclear when or even if a resolution will take place.

The show’s dancing is extremely athletic: there are jumps over ledges, face-forward falls, and acrobatic rolls and cartwheels. Political portions, like when a performer whips around the English flag in a show of nationalism, are reflected with jerky, borderline violent movements; meanwhile, the more light-hearted segments veer between lyrical and manic motions. There’s nothing canonical about the movement vocabulary, though it is a demanding one: one of the regularly reprised phrases takes the form of windmill arms and a choppy back-and-forth thrust of the head, sometimes carried out for several minutes at a time.

The eight-strong cast only occasionally comes together for unison sections, a shame as these are some of the strongest ones in the show. Not only do these portions show off the dancers’ collective precision as a troupe, they also reinforce the sense of community their characters share, despite their differences in class and agency. A floaty phrase performed to a cover of “Across the Universe” sees them unite in a spirit of quiet defiance—“Nothing’s gonna change my world”—while a riotous end-of-days conga line marks the eventual acceptance of their fate. Like the piece as a whole, the final moments are layered, bursting with both questions and answers. The finer points of “Park’s” themes have no doubt shifted over the decade since it was created, but their depth continues to make an impact.

Next
Heart to Heart