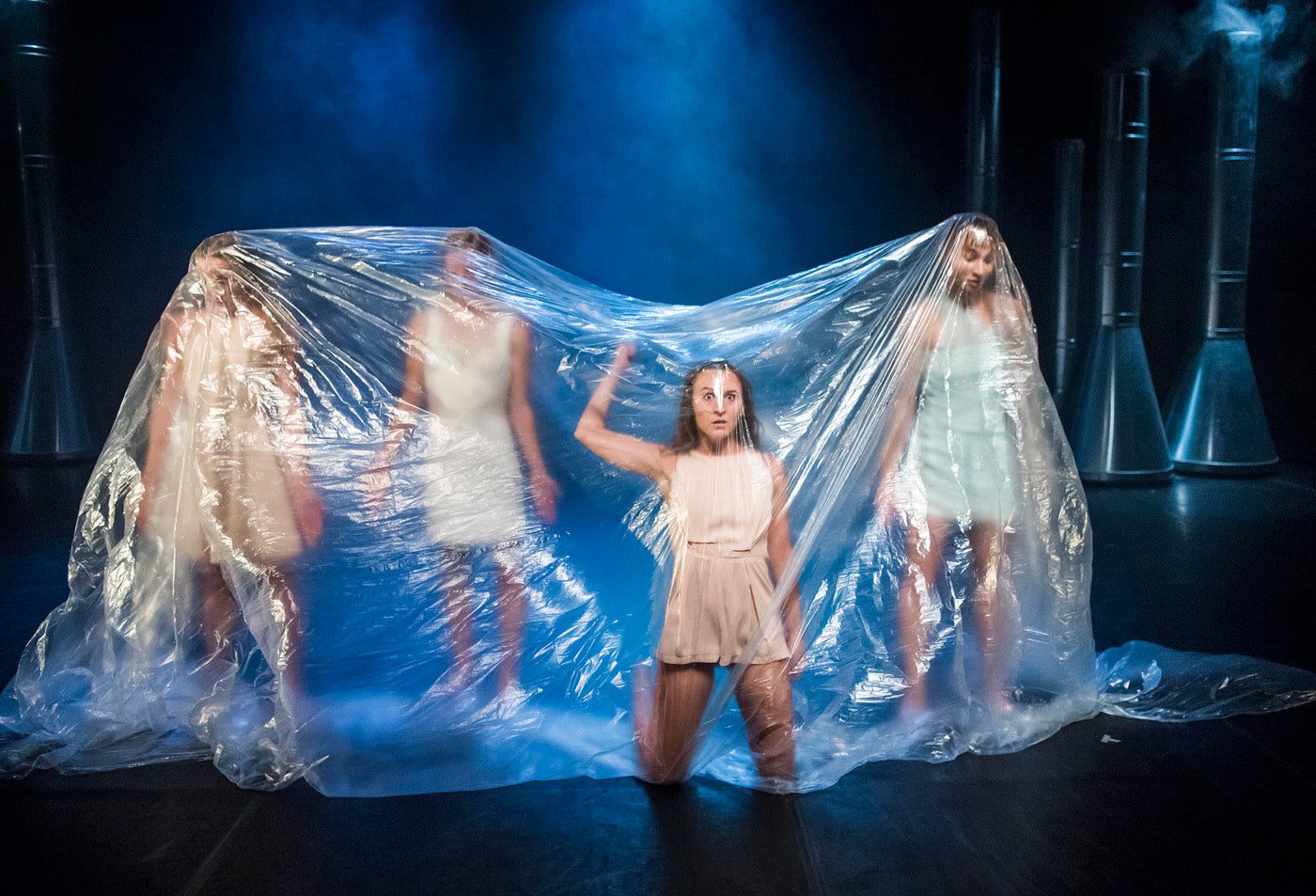 Of Monsters and Men

Think Medusa and you think snake-haired monster. But there’s a human side to the myth of the petrifying Gorgon: her rape at the hands of Poseidon, a detail that’s routinely forgotten, even though it’s this act of violence that prompts Athena to curse Medusa into beasthood in the first place. Acting out of jealousy, Ovid recounts, Athena “transformed Medusa’s beautiful hair to serpents and made her face so terrible to behold that the mere sight of it would turn onlookers to stone.”

Choreographer Jasmin Vardimon confronts the implications of this collective cultural edit in her latest dance theatre work, a feminist reckoning that considers aspects of the classical saga through a contemporary lens. Her starting point is Jean-Paul Sartre’s theory that consciousness begins at our awareness of other people’s gaze, which she uses to sketch a startling portrait of female objectification.

The women of the eight-strong cast are belittled across a series of fragmented scenes: inspected by their male counterparts like livestock, packaged in plastic like Barbies, discarded and swept off stage with a broom. Some incidents are flippant, like a visual trick that sees two beachgoers reduced to pairs of legs on sun loungers. Others are more explicit in their violence: men staking their claims by brawling like rams, a gang assailing a lone woman. Between these displays of toxic masculinity are glimpses of the misplaced rage that prompts women to lash out at each other instead of the ugly systemic forces at work.

The production, more conceptual than narrative, is overt in its politics, like in an early scene where a man rants about women who insist on sharing his light. “Women are shadows,” he insists, glancing down at the female performer at his feet, who mirrors his every move from the floor. In another, a woman is forced into an apron as the morose lyrics of “Bang Bang (My Baby Shot Me Down)” blare in the background. But if such episodes are unsubtle, they’re also effective in illustrating the slippery slope between objectification and rape culture. When four women perform a jolting, suffocating shuffle behind a sheet of cellophane, the visage quickly morphs from dolls in a box to corpses in a body bag.

As you’d expect, there’s more than a dash of snake imagery in Vardimon’s concoction. The choreography opens with winding body rolls from Jasmine Orr, dressed in sequins, and returns to these snaking torsions again and again, the cast writhing and twining. Vocal ‘shoops’ evoke reptilian hisses, while wriggling fingers become tiny frantic serpents. The motif culminates in the arresting image of three performers coiling Patricia Hastewell Puig’s waist-length hair so tendrils slither around her head.

Other eye-catching moments include an upbeat frolic to Yael Naim’s “New Soul,” the cast’s women flipping their hair and swooshing their skirts; and a canny illusion that sees rustling heaps of plastic transform into a churning sea when hidden dancers thrash beneath them. The show also includes an incongruous but striking climate change conceit expressed in hulking smokestacks that frame the stage, piping out foggy fumes.

There are a lot of ideas jostling for attention here, and there’s a roughness to the kookier ones, as if they’ve been patched with a different thread. What to make of a talking garbage can, spewing heaps of trash? Or a warrior wielding a glowing net? The effect is uneven, undercutting the attention the darker scenes have commanded.

Despite its irregularities, though, it’s an engrossing watch, driven by robust, hugely physical performances. The sweeping vocabulary Vardimon has refined over the years—furious, contorting dives, waving limbs and violent start-stops—is an apt vehicle for the ugliness of Medusa’s story, and her company tackles it with alluring force.

Previous
City of Others

Next
A Vivid Duet