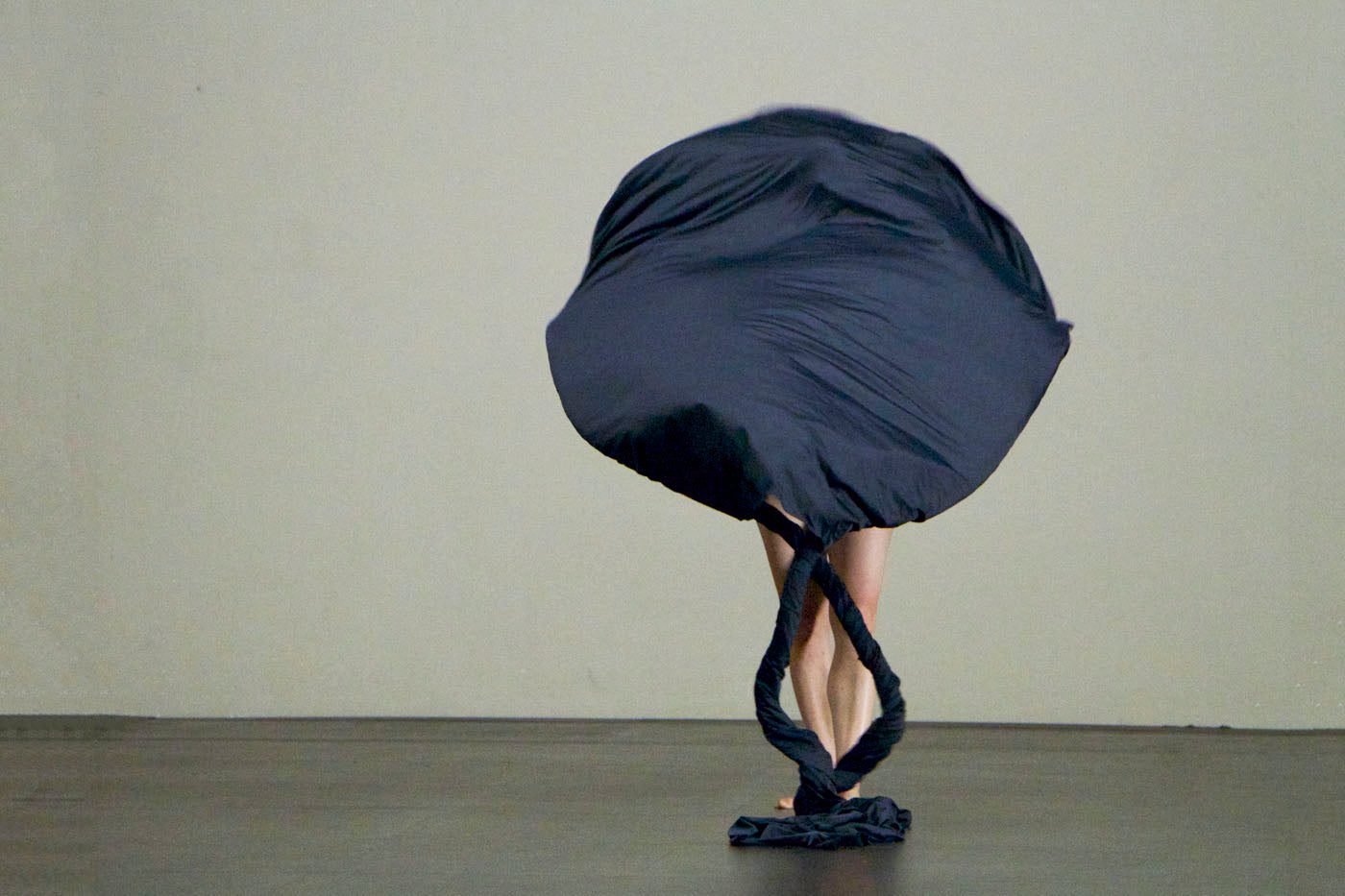 It is often said that one of a dancer’s unsung partners is the floor. In Isabelle Schad’s and Laurent Goldring’s 45-minute opus, “Der Bau,” one might consider Schad’s partner to be large swaths of fabric that she manipulates during the course of a physically intense, metaphorically-driven work. Based on Kafka’s unfinished novella, The Burrow (Der Bau), a tale describing the universe of an animal entrenched in a place to make it feel protected, the piece deals with the relationship between body and space.

Oh, and did we mention that Schad is completely nude throughout? Here is the body beautiful:  exposed, vulnerable, strong, searching and constantly in motion. Set to an original score by Peter Böhm —much silence, whooshing wind sounds, occasional tinny electronica, as well as having hot microphones placed on a sound board on the stage, with the audio mixed live—the opus, which premiered in 2012, conjures numerous landscapes as Schad invites us to be more than spectators, but also to feel her life force, take in her breaths.

The black box space of REDCAT was the perfect backdrop for this intimate and powerful piece that was seen over the weekend and presented in association with the Goethe-Institut’s 2016/2017 United States Tour of European dance. Schad, born in 1970, is a Berlin-based choreographer/dancer who, like her collaborator, Laurent Goldring, was a member of Wim Vandekeybus’ Ultima Vez, a troupe known for violence-strewn, adrenaline-laced works.

Here the violence may have been less an overt onslaught to the body and more in the realm of symbolism, though, considering the relentless workout Schad endured, could probably be deemed somewhat brutal: She held a posture in which she was bent over, her hands rubbing against her knees, before assuming a variety of task-oriented gambits that took on ritualistic, repetitive airs; bouncing, crab-walking, sidling.

In addition, Schad wielded a huge length of black fabric as if she were a matador, Mehdi Toutain-Lopez’ lighting design, at times, illuminating her like a Kara Walker silhouette. When Schad was wholly shrouded in a bolt of cloth, she could have been a burka-wearing Muslim woman.

With her arms raised and hands clasped at the wrists, Schad continued bobbing, a study in OCD, obsessive compulsive disorder, her hair, at first in a bun, eventually shaken loose. This was carpal tunnel of the body as she squatted, a long stretch of silence near deafening, before moving forward, unblinking.

The press notes explained that Schad’s main areas of research are “in the body and its materiality—the body as process, place and space,” with the German certainly a corpus magician, a master of her peculiarly mesmerizing universe. Brandishing another long length of material, this time as giant shawl, Schad thrashed the fabric in neo-Flamenco style. When she was on all fours, she was nothing less than animalistic, Pilobolussian shades of mordant humor also on view.

Schad was, in the best possible sense, possessed, at times bringing to mind images of Da Vinci’s Vitruvian man, or Robert Redford as the doomed, lone sailor from All Is Lost. When the fabric was sensually draped, Schad became a Vionnet model, veering from cartoonish to dead serious, transforming herself into a blushing bride sporting a long train, while yet another image invoked that of a Mardi Gras float-rider.

Or was she this: Schad as Martha Graham acolyte, contained while simultaneously stretching the outer edges of her garb, as La Graham had done executing her dance of mourning, “Lamentation,” in 1930.

Playing with the fabric as if it were a cat’s toy, Schad became a burrower of the highest order, one moment rolling inside a niftily constructed fabric ball, the next morphing into a human Christo sculpture, walking towards the audience, lying prone or fluttering the fabric as if these yards were rivers of redemption.

Having collaborated with Goldring, also a philosopher and artist, since 2006, Schad is the vehicle through which these huge lengths of material are used to create novel, yet familiar, spatial shapes.

It was Rilke who once said of Rodin that he does not sculpt the body, but the spaces around the body. With this in mind, a kind of phantasmagorical tableau unfolded through space, time and Schad’s tireless presence, one in which concepts and ideas decidedly took flight. This is a brave work that begs to be seen, with Schad baring all, including, one likes to think, a bit of her soul.