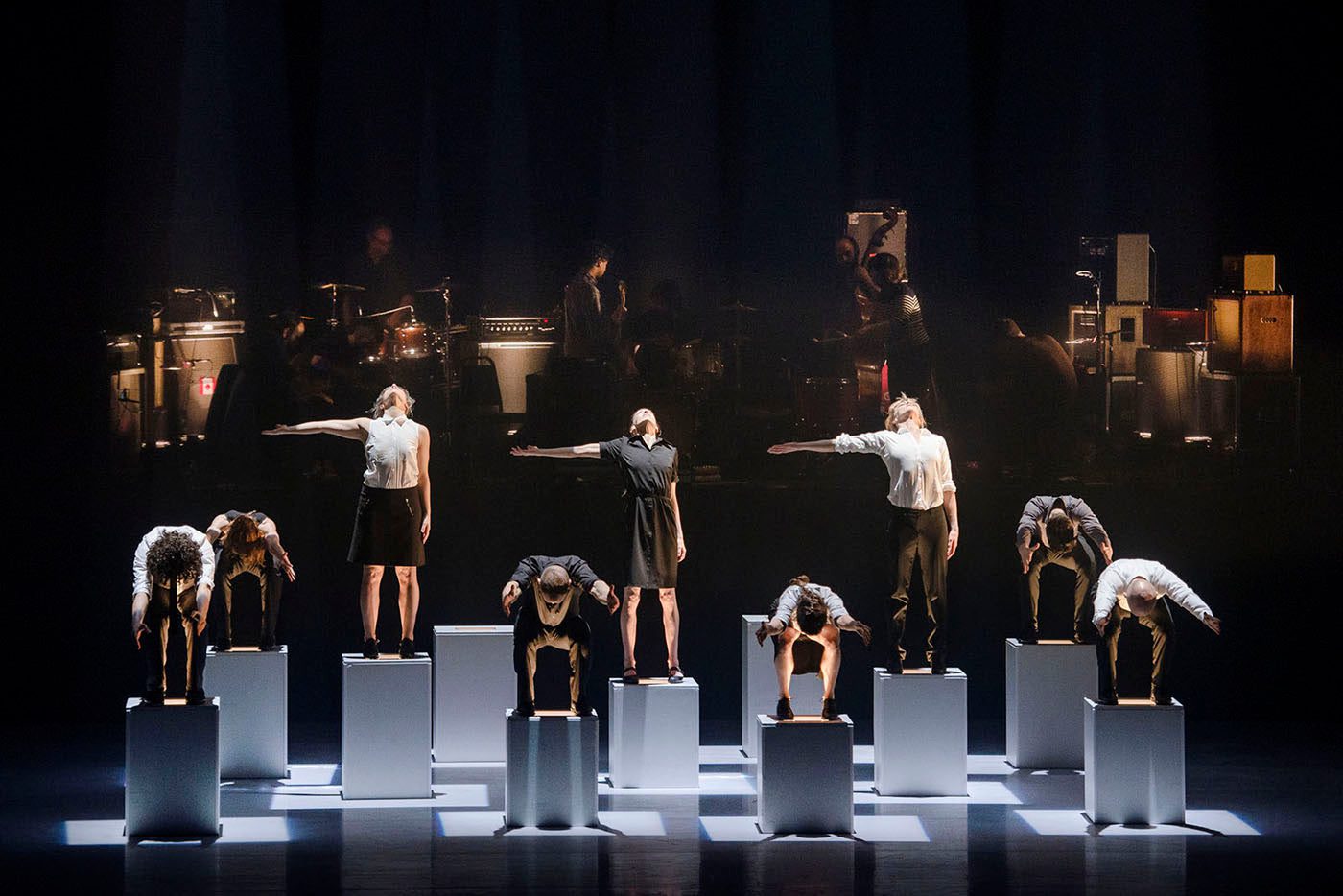 “Monumental” by the Holy Body Tattoo

As the audience files in to the genteel space of the Edinburgh Playhouse on this night, ominous bells chime—a portent of something truly disquieting. This sound acts as a warning that the show will not be an easy ride. What follows is breathtaking—and divisive. Vancouver’s Holy Body Tattoo, along with enigmatic post-rock band from Montreal, Godspeed You! Black Emperor, are a deadly combination, an eerie evocation of the end of days. GY!BE have always had an epic, uncompromising ethos, so this is an exceptional and inspired pairing.

On nine podiums, crouch nine dancers, who are initially half-lit. Wearing the monochrome of the corporate CEO and the business partner alike, they pose in, variously, despair, hurt and rage. They seem like a team-building office group shipwrecked and set adrift somewhere nameless in a dying planet. Pitched up against each other, trust is ebbing away, and moodswings ambivalent. Fists are clenched, doubtlessly referencing GY!BE’s famous tracks, both titled “Lift Yr Skinny Fists Like Antennas to Heaven.” To GY!BE’s increasingly intense, blistering soundtrack, the performers flail wildly, they strike militaristic poses, they scratch at unseen itches. Swinging like pendulums, hair flies and stickily masks faces, rendering them anonymous.

The repeated gestures of arms punching out into the air and angled heads turn in on themselves, and the ensemble slap at foreheads and torsos, emitting sighs. The choreography becomes as stiff as an army drill, a struggle for survival to the staccato rhythm of marching drums. The dancers yell out, their voices become a babble, and one man screams out, becoming hysterical. There is a smell of burning. Now the dancers attempt to scrub off something—germs or skin or the gnawing sense of alienation. It’s every woman or man for themselves out here.

As the music transforms into a Steve Reich-like hypnotic groove, things turn desperate. The individual is turning against the group dynamic, and the group against them. Prayers will not help now, and the people are grappling. Cruelty pervades, and one woman is picked on and goaded by the others. Sliding down the podiums, they slump, no longer human.

Yet somehow the instinct to go on takes over, and an Eastern influence of Butoh-style movement seeps through, as they slow the pace, almost surrendering to certain fate. Guitars buzz like a hundred hornets’ nests. Rictus grins appear on faces, kisses are blown … but it’s just another trick to seduce and distract others. Now the screen’s dizzying images of wind turbines and time-lapse traffic turn into glitches, and slogans turn to indecipherable code.

The music prickles like a tattoo needle on quivering skin, and the dancers consistently astound. My hair is full of electricity towards the climax, and I realise I have hardly moved in my seat. It’s fear, anger, euphoria, sex, flesh, touch—all of the intangible human feelings manifesting through a superhuman movement language: groping for new meaning, new ways to be. There may be a few boos tonight, folded arms and dumbfounded silence from those less accustomed to the apocalyptic onslaught of Godspeed You! Black Emperor’s music, but for the rest of us, as well as the newly converted, this is nothing short of incredible. A truly unforgettable highlight from the Edinburgh International Festival—very, very special.