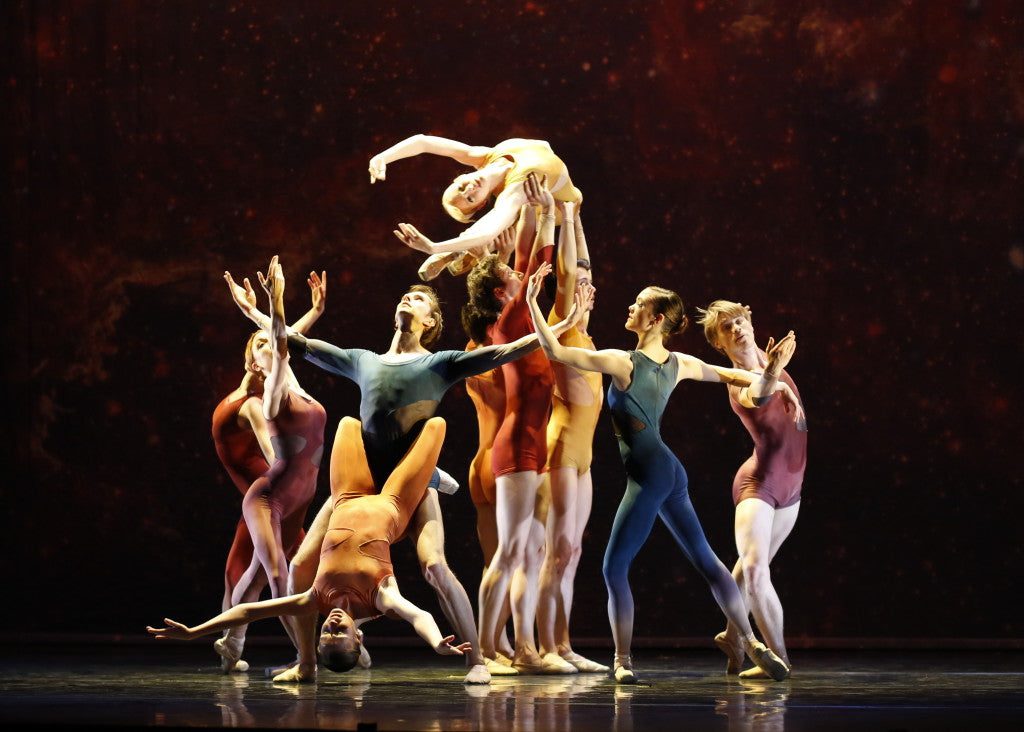 With “Tryst: Devotion and Betrayal,” New English Ballet Theatre demonstrates an unfortunate truth: enthusiasm alone does not a successful performance make. The dancers here are sound and their energy laudable, but the mixed bill, a hodge-podge of five wildly different works, ultimately proves a victim of its own ambition, pitching overpowering choreography to underwhelming effect.

The lone exception to this is Kristen McNally’s “Mad Women,” a spunky scorcher of a ballet that serves up a refreshing subversion of the powerless female trope. Here a band of rosy-cheeked, crop-topped pin-ups—a nod to “flesh and blood Stepford wives” for whom “men are assumed to be their consumers,” according to McNally—eschew the virginal compliance expected of them and instead take their sexuality into their own hands, waltzing to the pitch-perfect “Get Thee Behind Me Satan” and playing rock-paper-scissors for bagsies on the delivery boy. The sassy piece manages to strike that tricky balance between self-knowing and self-congratulating, thanks to both McNally’s clever vision and the sharp performances of the dancers she’s cast. Under a tangerine blaze the rockabilly babes’ cigarette smoking and lipstick application transform into superpowers of sorts, and nowhere is their agency more clear-cut than the scene in which they begin ‘malfunctioning’ upon testing out a more tired (read: male-dictated) brand of sexy.

By contrast, the evening’s other four ballets fail to resonate much beyond their running time. With Daniela Cardim Fonteyne’s “Tangents,” a look at the universal aspects of romantic relationships, the rushed, stilted tone ushered in during the first phrase never quite recedes; the six dancers, animated though they are, appear hurried, and there’s little chemistry between them to buoy the weighty theme. Erico Montes’ “Toca,” a take on Eça de Queiroz’s The Maias, is likewise strained: the duet attempts to cram a 1,000-page novel’s worth of pathos into a six-minute slot, an undertaking that undermines its own strong points—namely a lovely mood marked by convincing expressions and beautiful lines.

Meanwhile, the cast of Valentino Zucchetti’s “Orbital Motion” struggles to keep up with the breakneck strings of Philip Glass, falling out of their turns and scrambling to transition between formations. The galactic set-up, in which an octet revolves around a gold-clad duo meant to represent the sun, is interesting, but its merits are all but swallowed up in the chaos; there’s little time to appreciate the complicated tableaux at hand. The piece feels not only under-rehearsed but overextended—so much so that it’s difficult to imagine even the very top crop of dancers making this work.

Finally, there’s Andrew McNicol’s “Kreutzer Sonata,” clearly intended as the evening’s showstopper, what with its baroque set design and ambitious Tolstoy-inspired libretto. The dramatic ballet is lavish and tragic, but it feels very much like a first draft—the numerous set changes are fussy, and the characters’ motivations have yet to be coaxed out and refined. That said, Hayley Blackburn offers a tremendous turn as the youthful wife suffering at the hands of her husband’s possessiveness, her tortured persona dancing on the edge of every graceful arabesque and leap. The onstage music, which sees Anne Lovett and Andrew Harvey respectively dazzle on the piano and violin, proves likewise captivating.

The seeds of talent planted across “Tryst” are manifest, and with some choreographic fine-tuning and additional time to rehearse, I’ve no doubt a more polished and robust programme would emerge, one that underpins the commendable ability on offer with apposite choreography. NEBT deserves high praise for its patronage of up-and-coming dancers, but it does them no favours by mining their strengths without equally respecting their limitations.

Next
In pursuit of profundity